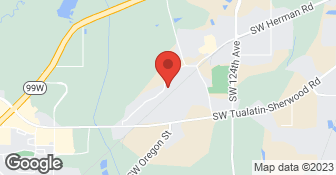 Over 25 years of experience, specializing in roof replacement and maintenance in the Portland Metro, Columbia County, Washington County and Northern Coast areas. We are the Northwest Premier Roofing Experts. Certified Installers. GAF Certified Master Elite Contractor and recipient of the prestigous Presidents Club.  …

So far so good. It has not rained yet to see if everything was repaired. I would use them again.

Ok -- but the concern is that we don't have any confirmation of what they actually did. They showed up on time and got to work but then left without checking in with us or letting us know what they did. They obviously replaced two damaged gutters which was the main issue. However, hey were also to check and tighten dow the balance of the gutters replacing nails with screws. I don't know if they di...

Michael Hampton, did everything to work in my repair work. The first visit was to replace some damage wood, install flashing and reroof. Then moss treatment. The workmanship was excellent! He even sent me a picture of the damage wood (was hidden). The second visit was when I wanted to sell my home. Michael did some minor work and then gave me a professional opinion letter Again Michael did an exce...

I called in early December 2015 about 2 leaking roofs. Stephanie took my information and told me that I'd be contacted by a project manager to set up a time for an estimate. A week later I got an email from her that they were backlogged and it'd be another week. I indicated that I still wanted to be contacted (based on their Angie's List reputation) and then never got an email back. I emailed almo...

Description of Work
Nothing. I tried to get them to come out for an estimate. They never came despite persistence on my end.

Doug was prompt and responsive in our exchanges. He was a top-notch professional. We ended up getting a special deal on the price with another roofer, so we went with them for this job. However, we'd definitely use Fisher for future jobs!

Description of Work
Doug came out to give an estimate on roof replacement.

Just getting the estimator to return my calls at the time of the bid proposal was challenging. I had to make several calls to the office over the course of several days before he would get back to me. And when he did, he did not know who I am after having written the bid. "I was busy", was his excuse. The office promised he would call the following day, but he never did. I decided to proceed with ...

Sadly, a call back for a quote took over a week. When someone finally made it out, he inspected the roof and took measurements of everything. He let me know that he was an installer and couldn't provide a quote but that someone would call me later. No call back with a quote. Obviously, we chose another roofer.

Description of Work
Came out to provide a quote to replace our roof.

Seems to be perfect. No skylight leaks, no other roof leaks.

They were on time. They were quick and they were out. They had a change in project manager after we authorized the work. The new project manager took the time to come and get acquainted on what was needed to be done so they did a good job of working for that change. It was really better than I expected and they met their schedule. They were all very busy during summer but they still kept their sch...

Description of Work
I used the service of Fisher for cleaning and adding leaf guard protection to the gutter system.

I asked Fisher Roofing for a quote on putting a new layer on flat roof of my house. Their project manager recommened TPO and informed me that they were a little backed up and it would take about a month before they got to working on my roof. On September 20, 2013 I got a proposal from Jim Fisher for a replacement of my roof which I signed and returned to them the same day. On October 14th, I asked...

Description of Work
Fisher Roofing put a new roof on my house. They did a fine job, but had to be repeatedly prodded to finish the job.