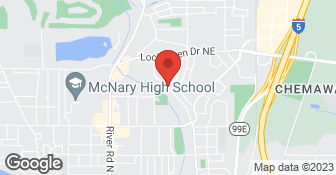 We are a father son operation,and have been in the tile business for over 10 years. We pride ourselves in doing high quality installs for a fair price. Specializing in building exceptional showers, heated floors, and kitchen backsplashes. But anything tile, we are your guys. We are knowledgeable and friendly, taking customer satisfaction very seriously. Feel free to call us with any questions on current or up coming projects that you may have. You can see us and our work on our website, and Facebook! TheTileGuysOregon.com The Tile Guys Oregon LLC Rick and Michael. 503-349-9105 Licensed, bonded and Insured.  …

We are here to ensure your home renovation experience is effortless. You will have one contact throughout your project with timely updates and replies. We can work with any manufacturer and bring samples to your home / project site. Once the contract is signed & we decide on a start date we are there consecutively until we are done. No bouncing around to other projects leaving your home looking like a construction site for weeks on end. Modern Blueprint is a local, family-owned company established in Portland, Oregon. We have dedicated our business to modernizing and streamlining the residential flooring industry through consistency, transparency, and simplicity. Introducing a more current and efficient business model; utilizing technology and putting a precedence on timeliness, communication, and professionalism Between our 4 team members we have a combined 12 years of experience in flooring/contracting space, along with 9 years business operations experience, We know that Customer Experience is what bolsters our Brand; being the top priority every day. We specialize in solid Hardwood, Engineered Hardwood, Luxury Vinyl Tile & Plank both interlock and glue down, Laminate, Carpet, as well as finishing Trims. We are here to help. Please never hesitate to reach out:)  …

He came to install when he wasnt supposed to in the winter. He took a different road, got stuck, broke up our asphalt. The builder asked if he was out here and he said no. The nighbors said that they pulled him out of the rut he made. He lied about it. He also put foot prints all over our floor. He sprayed sealant on the ceiling, and got some on the wall as well. He barely cleaned up after himself when he was working. After the floor sealed, it was like walking on sandpaper, because he did not do a good job keeping sawdust off the sealant while drying. There were areas where he didnt even use a drop cloth, or a vacuum. The builder made him come back to fix it. He used another type of sealant that didn't match. You can clearly tell the difference between the oil based sealant and the water based sealant he chose to use. He said it would be fine. The builder made him come back again to sand it all off and do it again. He tried to use wood filler in low spots. When he was done he never even used the correct amount of sealant. The floors were still bad. Had new shoe prints now. The floors were still bad, and so low in some places that it looked like it was peeling up. There were stacks of extra wood that we asked him about. He said he used all of it that he could and would leave us with some for the future. But he didnt. I think he resold it. The builder ended up in the end having to find a new floor person.... the second guy ended up not being very good either.

Description of Work
He originally came to install about 3000sf of hardwood floors.