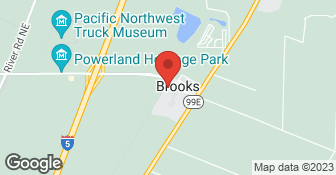 Oregon Bath and Kitchen (OBK) is a family owned business specializing in custom kitchen and bathroom remodeling and renovation. We have been in business since 1991 and provide services in Oregon and Washington, as well as provide contract manufacturing throughout the United States....

Great. Love the pull out drawers, so much easier to find things. Love the new counters, easy to clean and durable. Really lightened up the kitchen and overall feel of the kitchen.

Description of Work
Pull out drawers in the lower kitchen cabinets and new countertops in the kitchen, new faucet and new garbage disposal.

Description of Work
new countertops, new sink, new splash guard. Coordinated with appliance installation provided by others.quality was very good, communication was a bit spotty, with some confusion as to what had been ordered. Consequently there was more cost than I anticipated.

no work was actually done

Description of Work
we went into their showroom to get ideas for a ktchen upgrade and bathroom remodel and to add a bathroom. We were shown some great products and scheduled an appointment for them to come out to our house for an estimate. They came out, everything sounded great and we was promised a written estimate in 7-10 days. No estimate, so I called and they said they were swamped and would make it a priority to get it done within 7 days. Still no estimate so I called again.......the estimate writer gave many excuses and said he'd hand it off to another. Still nothing. I will NEVER recommend or deal with them again.

Oregon Bath and Kitchen's work product was no better than that of an amateur handyman and the mistakes were obvious. The following are examples of some of the numerous problems: The plumbers set the shower valves improperly in the first bathroom and repeated the error in the second bathroom. The toilet valve in the second bath came through wall just above the tile base, too low to allow the trim ring to clear the tile. The toilet and sink valves leaked. The sink plugs would not seal after installation. Oregon Bath and Kitchen claimed the sink plugs were faulty because the sinks were purchased from an outside vendor. We installed the sink plugs correctly in a matter of minutes. The seals around the shower door leaked. Cabinets were delivered and installed with obvious damage. The finish on the cabinets was redone numerous times and did not match the samples provided. Cabinet doors were misaligned. The new bathroom doors did not match samples provided. Trim around the doors and window was not installed properly. Tile on the floor was not straight and within days, grout fell from the seams. We learned that Oregon Bath and Kitchen's employee was not a certified tile installer and so requested a certified tile person for the floor work and Oregon Bath and Kitchen refused our request. The framing of a small wall that separated the two bathrooms was constructed in the wrong place. It took three attempts to get the wall straight and in the correct location. We explained that an electrical box was located below a granite back splash. This oversight would make it impossible to install the new vanity and back splash. Oregon Bath and Kitchen reset the box. A large hole was cut in a bedroom wall adjacent to the second bathroom without homeowner approval in order to get access to the second misaligned shower valve. Fixing this wall resulted in another series of unnecessary and misguided repairs that delayed job completion and caused inconvenience. We requested that a company representative accept responsibility for checking all work completed each day. The result of this request, Oregon Bath and Kitchen called and asked us to check for problems. Existing insulation above the ceilings and below the floors was not replaced. The job was completed mid January of 2011, clearly beyond the scheduled completion date and a year later grout around the tile is failing in both bathrooms. Oregon Bath and Kitchen returned to correct this problem but said the repair is not warranted explaining that cracking grout is to be expected. Oregon Bath and Kitchen misrepresented their work product and skills and grossly underestimated their ability to complete work within a reasonable time frame. The company representative, time and again demonstrated a lack of knowledge regarding skills, techniques and products directly related to the project. In short this company provided the highest bid and delivered the lowest quality. They were recommended by others although we were unaware that the previous skilled staff had moved on. Oregon Bath and Kitchen corrected some of the problems but not without attempting to convince us that the problems we were addressing were not worth their time and effort. One example: The sanitary seal around the bottom of the toilet is incomplete. The back section of the toilet is not sealed. If the toilet overflows and water goes down into the sub floor, problems can result. This kind of detail was consistently ignored. Anyone who wants the job done properly will be constantly frustrated by this remodeling group. Upon completion of the job in mid-January, representatives from Oregon Bath and Kitchen asked us if we were happy with the result of their efforts. The answer: We were unhappy about all of the problems they created, unhappy about having to spend a great deal of time getting them to correct problems, unhappy that the job took much longer than planned, unhappy that the project was not completed before Thanksgiving as promised and very happy to see them leave our property. Avoid Oregon Bath and Kitchen.

Description of Work
The contract was for the complete remodel of two bathrooms and the estimated construction time was two weeks per bathroom or four weeks for the entire project. The project began in early October of 2011 and we were assured it would be completed well before Thanksgiving.

Everything went very well. The person we worked with gave us ideas by showing us examples in their showroom. He listened to our needs and expectations and designed a very good solution for our situation. The cabinets installed very easily and four years later still look very good.

Description of Work
Designed and built a bathroom cabinet including a specialized set of storage drawers. Was very easy to deal with. They drew up plans for the cabinet according to our description of what we wanted. Built the cabinets for my installation.

They charged me about $1200 for one bathroom and $4000 for another bathroom. The bathrooms were remodeled a year apart from each other. I liked the quality of the products that they had. They are a locally-owned company. I had received good reviews from others about them. They did plumbing work for the sinks. The flooring consisted of tile work. There were problems when I had used them for the first time. However, I thought they were less likely to reoccur when I used them for the second time. Everything went well the second time around. They were good about cleaning up. I don’t think I will use them again in the future.

Description of Work
I used Oregon Bath & Kitchen, 2-3 years ago. They replaced flooring, two sinks, and countertops in two bathrooms.

It was great and we didn’t have any problems with them. They came out on time to get the job done. We had received 3 bids and the price that they had charged was comparable to the others. My overall experience was excellent. I would recommend them to others. If need be, then I would use their services in the future too.

Description of Work
We used the services of Oregon Bath & Kitchen in May for remodeling three bathrooms. They remodeled the bathrooms completely except for the shower in one and a bathtub in another.

It was very good because it did not take long. They were super. They were good about everything, including cleaning up at the end of the day. They were professional and friendly.

Description of Work
They came to our home and remodeled the kitchen for us.

Sam's Painting & Remodel is a small business who takes pride in what we do. No cutting corners. We do things right the first time around so you don't have to keep calling different contractors day in day out! We do not do LEAD Painting at this time.  …

We have the experience and dedication to bring your dreams to reality! Specializing in Painting Services, we guarantee your satisfaction, and we won’t leave until the job is done right. We pride ourselves on the quality work we provide, while delivering great customer service! Call or click to schedule a free estimate today!  …

All statements concerning insurance, licenses, and bonds are informational only, and are self-reported. Since insurance, licenses and bonds can expire and can be cancelled, homeowners should always check such information for themselves.To find more licensing information for your state, visit our Find Licensing Requirements page.
General Information
Free Estimates
Yes
Eco-Friendly Accreditations
No
Payment Options
Check, Visa, MasterCard
Senior Discount
No
Warranties
No

OREGON BATH & KITCHEN is currently rated 4.1 overall out of 5.

No, OREGON BATH & KITCHEN does not offer eco-friendly accreditations.

No, OREGON BATH & KITCHEN does not offer a senior discount.

No, OREGON BATH & KITCHEN does not offer warranties.