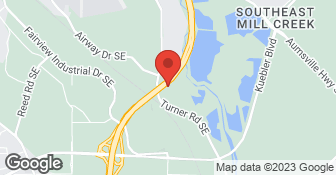 Better Built Barns, Inc. is the premiere provider of installed storage sheds in Oregon, Washington and Colorado. Since 1994, Better Built Barns, Inc. has dedicated itself to giving our customers a positive experience. We achieve this through the service and by the sincerity of our employees as well as through; the unparalleled quality, strength, and visual appeal of our buildings, all at an unsurpassed value. Our customers are highly satisfied, and as a result, recommend of our company to their friends and family....

It took three months from the time I ordered the shed until it was delivered. In September 2021 they installed the shed but sent the wrong door frame kit a 6 foot frame for a 5 foot door. They said they would be back with a 6 foot door rather than rebuild the door frame. A month later October 2021 they installed the 6 foot door. By mid November the doors were bulging and difficult to open and close. Four months later March 2022 they brought replacement doors. After installing the new doors the right hand door was bowed and didn’t close tight. The installer went to Lowes and bought some weatherstripping to see if that wouldn’t close the gap. When that didn’t work I was told they would bring a new right hand door. They are now saying that a door with a 3/8 inch gap at the bottom and 5/8 inch gap at the top is within tolerance. All I want is a shed that is sealed from the elements. This one is not that product and getting right doors has been a fight still not won.

Very disappointing. The customer service is bad. The workers are great but the front desk person was not. The project was to be a one day job but due to not showing up until late afternoon and having some wrong materials had to return, but not for over a week. Upon return they still did not finish due to forgetting to bring a window, so now the soffit is not completed and two windows remain to be installed. There was order confusion (my fault) on the awning and deck that had nothing to do with finishing the main shed. Now, two weeks later they are requiring an additional $600 to complete. Initially I was told it was a $300 charge to return and now they’re requiring $600, which was paid, but they aren’t returning until who knows? Totally unbelievable! I warn others to look elsewhere. The upper management doesn’t appear to be any better.

Not sure what happened to this company as I've used them in the past with reasonable results, but try or not, they succeeded in convincing me that they neither value their customers nor their product. With my second nearly $4k shed, the doors were installed in a "V" shape and there was a large gap allowing water and insects in. Lost a day of work for the day they were going to fix it and no-showed without bothering to let me know. Call after call, promise after promise and I gave up. I guess I really bought the wholesome local family business thing and didn't even consider another company. They have lost my respect and business.

Lot of things not well done. nails that were not attached to anything. Damaged siding panels. Damaged 2 by 4's. Window that wasn't centered properly. Grass that was nailed in with some boards--not sure how they managed that one. The door doesn't shut quite tight. They really talk about quality and I think it was just talk. They did respond to my request for changing the door style immediately and the orientation of the building. They were a nice couple of guys that did their job cheerfully. They managed to get me in without too long of a wait time.

Description of Work
10 by 12 shed built.

Description of Work
Better Built Barns personally went over every detail of the shed we wanted and then built the shed to our satisfaction. The quality of the shed was excellent.

They showed up on the day and time they said they would, got to work right away and were done around 5 hours later. Where a bare piece of gound was, appeared a beautiful shed the shape of a barn and ready for us to move our garden tools in. They cleaned up after themselves and the owners son even came out to help the two men so they could get the job done sooner. Very nice business to work with. Paid half down when we ordered the shed and the rest when the shed was built. We need to paint the shed within 90 day to keep the warranty. Their web site is very easy to use to build the shed of your dreams and if I had any questions they were very happy to answer any of them over the phone.

Customer, Thank you for the opportunity to work with you. I am very pleased to here of your satisfaction with our product and service. Your comments are greatly appreciated. Please contact us if we can be of assistance to you in the future. Sincerely, Better Built Barns, Inc.
5.0

It went extremely well. In summers, I work outside. I watched the whole build out. Everyone was respectful. No crude language or anything. The leveling was the most interesting part. Not having the proper tools, I could not ensure that the 20' run would exhibit less than a 6" rise, which is the requirement they list on their website. And, in fact, the rise is more than 6". But they handled it well with extra blocks and shims.

Description of Work
I designed the shed (10' x 20' Courtyard) with their website, confirmed it all in person at the Oregon City office. A few weeks later, they honored their quote, I paid and we scheduled a day for the build. They called that morning to confirm when they'd arrive. They got here on time, confirmed the design, and built the thing in ~5.5 hours, with minimal impact to the yard. After they finished building it, they walked me through the caulking and painting requirements (to get the warranty), asked for questions, answered, and took off.

Member, I know this response comes a little late, but thank you for your business. I am pleased to see another satisfied customer of ours. Thanks again. Sincerely, Better Built Barns, Inc.
5.0

Everything went well and I would use this company again. One final note: the Better Built Barn web-site has lots of ideas of how to dress up your barn. It helped me to make my final paint choices and gave me ideas for planter boxes, etc.

Description of Work
Better Built Barns came and built a barn which will be used as a garden shed. The company was very flexible and allowed me to change the design up to the last minute. I purchased the barn at the Home & Garden Show in February. We had to make a place for the barn so it took a few months of moving dirt to prepare the site before we could have it installed. Once I made the call to say we were ready for the barn, it took only 1 1/2 weeks before they came out to build it. The barn is completely made of wood. It has three windows, a door, and two vents. The barn is 8 ft by 12 ft., so it is pretty good sized. They built the barn from the ground floor within four hours. The barn comes with a 10 year warranty, as long as we paint it within 90 days from installation.

Customer, I know this response is a little late, but I wanted to take a minute and thank you for your business. It is always great to read about how satisfied our customers are with our product and service. If we can be of any assistance to you in the future, please feel free to contact us. Sincerely, Better Built Barns, Inc.
5.0

They did a really good job. They did it quickly and well, they cleaned up after themseleves and their price was good.

Customer, I realize that this response comes to late, but I wanted to take a moment and thank you for your business. I am very pleased to read about another very satisfied customer of ours. If we can be of any assistance in the future, please don't hesitate to contact us. Sincerely, Michael w/ Better Built Barns, Inc.
5.0

Description of Work
In 2007, we had Better Built Barns build a shed for us.

Customer, I realize this response comes a few years later, but I wanted to take a few minutes and thank you for your business. It is great customers like you that has helped Better Built Barns, Inc grow into a thriving business that is satisfying more customers than ever. If we can ever be of assistance in the future, please don't hesitate to contact us. Sincerely, Michael w/ Better Built Barns, Inc.

We deal in most residential remodels, (interior and exterior). We specialize in roofing, but we do most anything from kitchen and bathroom remodels, to flooring, siding, fencing, painting, ect. We are a small, 2 man owned business.  …

JBLC Construction is a family-owned and operated business based in Philomath, Oregon. We offer a versatile range of services for commercial and residential clients including siding and framing, windows and doors, dry rot repair, light excavation, and more. Whether you're looking for a complete home-makeover or a new floor for the office, JBLC offers quality craftsmanship at a fair price. Call us today at 541-609-8933 to speak to a representative.  …

We are a family run business and I am a 4th generation contractor, having recieved my first contractors liscense in 1978. We specialize in remodeling light commercial and residential buildings. Our skill set is framed in meeting the needs of our customers with a focus on troubleshooting problems and recommending specific solutions. We place emphasis on doing turnkey work and have the ability to provide design and build services. We self perform some carpentry related tasks, but bring in sub contractors to help get larger projects done more quickly. I always rely on licensed plumbers and electricians to do specialty work, while applying for building permits and having the proper inspections completed as occasion requires. Since communication is such a large part of success, we use smart phones to stay in constant contact with our customers as we work together. Payments with Visa is possible. Generally we require 50% payment upon acceptance and the balance upon completion.  …

BETTER BUILT BARNS, Inc is currently rated 3.8 overall out of 5.

No, BETTER BUILT BARNS, Inc does not offer a senior discount.

Are there any services BETTER BUILT BARNS, Inc does not offer?