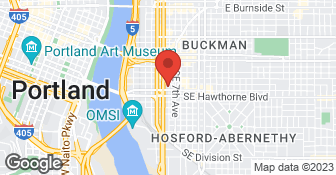 We are a design-build firm that specializes in building energy use. We aim to massively reduce carbon emissions and energy use in the built environment while using local, responsible, non-toxic materials. In our building and remodeling work, we integrate beauty and building science to build homes with superior health, comfort, performance and durability. We are the only FSC certified builder in the US. And, we have a team of energy experts and moisture analysts that carry certification through the Building Performance Institute (BPI) and Passive House....

I sent an e-mail and they quickly got in touch with me to schedule a phone call with a rep. A few days later we talked for an hour and he gave me a rough estimate and said he'd like to come for a site visit. And he did. He spent an hour talking about two different options with us and continually attempted to guide us toward what he would do with our situation to fit his tastes rather than what we wanted. Fine. We would be willing to keep the work going in the right direction but it got tiresome. He made a bunch of pictures and said he'd follow up in a few weeks with an estimate. We haven't heard from him since (and gave the project to someone else).

Description of Work
We asked Green Hammer for an estimate for adding a second bath to our home .

I'd worked with these people on a project at a previous house, and had really enjoyed working with them. I'd readily work with them again, but on a large project like this one, I would play a very prominent role as "manager" of my own project interfacing with them. Put everything you want into clearly composed emails, so there is a written track record. But I think that is just a common-sense good approach with any project such as mine. On both projects, the work was done with high quality. And all Green Hammer personnel were pleasant, well-informed, willing to readily share information about their work and helpful. GH made this big complex project relatively easy. There were just a couple things that went awry in the project... Wiring for a 2d floor smoke alarm was NOT connected to an available nearby circuit dedicated solely for all house smoke alarms, but was instead wired into another circuit in the house. I had mentioned that "smoke alarm" circuit in conversation with the GH project lead, but I should have been a bit more formal by putting that in writing in an email etc. Or I should have been present to go over this detail with the electrician myself. On both this and the earlier project, the intent was for re-roofing to also include fixing drooping roof ends which over the years had pulled corbels out of their positioning on the house exterior. And in both projects, this fix was not implemented as desired. In the earlier project GH roofing sub-contractors did make an IMPROVEMENT. In the 2d project that is the specific focus of this review, it's more complicated. Historic district restrictions prevented the most obvious approaches that might have been applied. After the roof was done and I mentioned that the roof end drooping hadn't been fixed, GH said that the mechanism they'd planned to apply didn't seem workable after they had the roof off. So apparently there was simply a decision to make no improvement at all. If I were to engage GH for similar work again fixing drooping roof ends, I would be VERY tenacious and visible with them about this roofing "fix". I'll repeat however that my review is very positive and I'd work with GH again. But it makes sense to play a strong "project manager" role yourself while interfacing with them. Maintain knowledge and clear written communications about your details, and follow up to make sure those are understood and implemented. But I think this would be true in EVERY big project.

I was very happy with them, they were proffesional, and very clean. I would recommend.

Description of Work
They insulasted my attic and basement.

This was our first big home renovation on a newly purchased 1926 Irvington house. Greenhammer was very professional and responsive from start to finish. They provided excellent design-to-completion guidance and overall the complex project with many moving parts was finished without any major setbacks or headaches. And honestly, this was more than I expected. The project schedule and pricing was very transparent and changes we asked for half way through (for example, we decided to remove the chimney), were quickly accommodated. Overall I thought we thought the subcontractors did strong quality work and Greenhammer project lead stepped in immediately whenever there was a quality issue. I felt they had our backs the whole time.

Very well. Very complete and timely. Although we did not use them in this project I wouldn't hesitate to hire Green Hammer in the future.

Description of Work
Gave an estimate for insulation.

It went great. They did everything I needed done. I would recommend them to others.

Description of Work
I used Green Hammer to insulate my house, replace windows, and put a new furnace in.

They were excellent! They pay attention to detail. We hired them because of their focus on energy conservation and green products.

Description of Work
They did almost a whole home remodel. They have done everything from kitchen, bathrooms, flooring and much more.

I liked that they were local and that they were green. There was kind of a mix up because the guy who was in charge of our account quit in the middle of it, so there was this kind of overlap where there wasn't any work done for three days and no one knew what was going on. They made up for it and gave us a discount. They were pretty professional and did a very good job. They had some very good artisans and people that knew what they were doing. They were also here on time.

Description of Work
Green Hammer insulated our house including the attic. We took off the asbestos siding ourselves and they cleaned things up, so it looked like the original house. They also installed a heat pump and a backup gas furnace.

Thanks for your understanding regarding the project manager transition that happened during the installation of your project. That was a challenging transition for us to navigate, and working together with a considerate client like yourself made it possible to arrive at a successful project with a minimal amount of disruption. It was a pleasure working with you! Best, Devan
3.0

Not too well. They were nice enough when we discussed the problems, but they did not deliver. I think their reputation is overinflated.

Description of Work
Green Hammer did our energy audit and agreed to weatherproof our house and blow in insulation into our attic. They had to be micromanaged to finish the job and still missed key places they promised to do (which appeared on our bill as completed). We also looked into them having manage our window insulation but found them to be unresponsive and expensive.

Hello Member, Thanks for reporting your concerns about your experience with Green Hammer. Unfortunately your project happened during a transition time for one of our employees, and he is no longer employed at Green Hammer. I realize in this instance that our work was not up to our usual standards. If I recall correctly, I listened to your concerns, asked what I could do to make it right, and was agreeable to the financial adjustments you proposed. I'm sorry you had this kind of experience with Green Hammer, and we are all grateful for this opportunity to improve. Best, Devan
5.0

Overall they did an excellent job. I will definitely use them again.

Description of Work
They installed new sidings, built a new deck and did some repairs.

My Oregon Painting is a locally-owned and operated residential and commercial construction company that specializes in delivering high quality custom renovation projects in SE Washington and the Portland Metropolitan area for over the last 10 years. Our well-trained team members are the backbone of our operation. The people that make up My Oregon Painting are proud to bring their craftsmanship and professionalism to every project big and small.  …

thanks for visiting, give us a call or click for an estimate, today!  …

*** ATTENTION CORONAVIRUS PANDEMIC*** WHAT IS PORTLAND CONSTRUCTION IS DOING? To all of our Clients we would like to let u know that you can be sure to contract us without any pending and with the confidence that we are taking all the necessary precautions to give you all the Safety to your family that due to the CoronaVirus, we will be disinfecting all our Tools before entering your home,of course takes time consuming but Portland Construction's priority is your safety and your Family,also we will have a Water Station with Soap outside to wash our hands before entering your home.We will treat your house like if is our house . Please stay safe and Healthy! PORTLAND CONSTRUCTION LLC is a full ser­vice DRYWALL COMPANY and REMODEL with 20 Years Experience Building Nike, INTEL, OHSU, Legacy Hospitals,Providence Hospitals and Schools over the years (Commercial and Residential). We are de­voted to ful­fill­ing the needs of our lo­cal clients. Our goal is to cre­ate a level of trust with our cus­tomers, so that they are com­fort­able know­ing that our pric­ing struc­ture will be money well spent on their dry­wall projects. It’s im­por­tant for us to dif­fer­en­ti­ate our­selves from fly-by-night con­trac­tors and de­serve the rep­u­ta­tion in the com­mu­nity. Portland Construction is here to bring a fair bid to acomplish our Quality. If u need a free Estimate call us: ‭(971) 732-6475‬ CCB# 217861 Chuy Pay with Crypto and get 10% off: Bitcoin Ethereum Cardano Dogecoin  …

Bonded
Insured
All statements concerning insurance, licenses, and bonds are informational only, and are self-reported. Since insurance, licenses and bonds can expire and can be cancelled, homeowners should always check such information for themselves.To find more licensing information for your state, visit our Find Licensing Requirements page.
General Information
Free Estimates
Yes
Eco-Friendly Accreditations
Yes
Payment Options
Check
Senior Discount
No
Warranties
Yes

How is Green Hammer overall rated?

Green Hammer is currently rated 4.6 overall out of 5.

What days are Green Hammer open?

No, Green Hammer does not offer a senior discount.

Are warranties offered by Green Hammer?

What services does Green Hammer offer?

Are there any services Green Hammer does not offer?