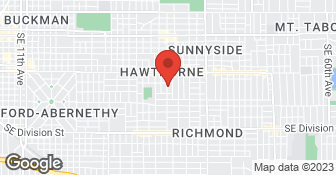 Experienced, Local, and Green Serving Portland, OR since 2004 Licensed and insured for both residential & commercial properties...

I don't have any comparison for the price expect for where I am now, in which case is really expensive. Of all the other ones I've had, Good Green Neighbors is the only one I'm the least like "yaaay". There were a few things that I asked, I guess, the issue would be: follow through with promises made by the caretakers on site.

Went pretty well. We got his info based on some work he performed for a friend, and I thought it looked pretty nice. We told him what we were looking for, and he had us choose out some plants from the nursery. All in all the end result looked pretty nice for the budget, and the drainage stuff he installed looked pretty solid, though I'm not in a position to really evaluate the efficacy. I really liked some of the aesthetic choices he made: the choice of rock features and the way he laid out the rock riverbed was quite nice. I wish there was some more mulching done to prevent weed growth, and the zen rock garden was not the best idea as my cat found another use for it. Good idea though.

I guess they're very busy, so they never got back to me. Kind of unprofessional.

Description of Work
After my initial phone call, I followed up twice via email to get someone to come out and take a look at my lawn and provide a bid for service -- no one got back to me.

I called Rich to get some yard work done at my home and also at a triplex that own nearby. I called on 6/10 and left a message but didn't hear back. I called again on 6/11 and left a message. Rich called me back the next day. He was very nice on the phone. I described what I wanted and he estimated a price that I thought was very fair. Because of the nature of the work to be done, I needed to meet with him at both properties and do a walk around. We set an appointment for the next morning at 10am, 6/13. I explained that I had friends coming over that afternoon, so the work would need to be done in the morning. We would meet at my house and then go to the triplex. The next morning I waited but he did not come at 10. At 10:45 I called him. He said that he had switched some jobs around and would be at my house at noon. I said that it would have been nice for him to call and let me know so that I could take care of some other things in the morning. He didn't apologize but just said he was taking care of a lot of things. I told him that I could change some things around to meet him at noon, and I reminded him that I needed to be done by 1:00 because of my company coming. He wasn't there at noon, but at 12:20, a truck pulled up with one person. When I went out, I found out that it wasn't Rich. This person was willing to get started, but I said that I needed to walk around with Rich and make it to another property and get back to my house by 1:00. I asked him where Rich was and he said he'd be along shortly but he didn't know exactly when. He was willing to get started, but I really needed to go over all the work and get Rich's advice before anything got started. Without knowing how long it would be before Rich got there, I said I would need to cancel because I wouldn't have time to go over both properties. The young man was very polite and apologized. He left and I never heard anything further from Rich. I hate to write a bad review because I know we all have bad days. Rich was certainly nice on the phone and his price was fair, and I was eager to do business with him. But I didn't feel like he was respectful of my time, and he didn't communicate with me about the schedule changes. I felt frustrated because after waiting several days for him to return my call in the first place, and then getting an appointment set up, I then wasted an entire morning waiting for him.

Description of Work
service not performed

I was running a little late that day. It was spring time. When we are crazy busy One of my employees was has gotten there a few minutes before me. But was told by [member name removed] to leave, since I wasn't there And told him she didn't want our service. That being said I felt no reason to follow up , We try our best to make every appointment , but sometimes we are overwhelmed with inquires especially in spring and summer If only there where more hours in a day
5.0

Landscape maintenance. Price was $125 per month

I really love these guys. They show up when they've said they're going to and they do a great, thorough job while they're here. The yard looks all set to go for the winter now!

Description of Work
Mulched, cleaned up yard, pruned, cut back overgrown summer plants, checked on the tree they planted in the spring, cleaned up after themselves, tidied the gravel pathway they put in for us in the spring.

They were outstanding and by far the best company I've worked with in a long time! The owner came out personally and walked grounds with me. He gave me options as far as where I should spend and where to save. I feel like I got a tremendous value for what was done. The crew busted it out and did a great job and they all seemed like they were having a good time. His knowledge of the grounds and what was wrong with our trees was outstanding. Without asking, they even stacked all of the wood from the trees they cut down for my firepit. I intend to use them again this summer.

Description of Work
Good Green Neighbors came for a consultation for landscaping and tree removal.

I've worked with Good Green Neighbors since 2005, and recommend them without reservation for lawn and garden maintenance, gutter cleaning, and backyard landscaping projects. Rich and his crew are always a pleasure to work with. Easy to contact by email, phone or text, and show real care for your property. Rich has had the same core employees for the entire time we've worked together, and I think that really says something about how he runs his business. I've used them for: - lawn mowing, edge trim, weeding, upkeep - lawn renovation / leveling and re-seeding - tree/shrub removal - backyard landscape and hardscape planning and execution - vegetable box installation For our hardscape project, Rich selected the most amazing battleship blue slate pieces. We eventually re-painted the house using those tones as our inspiration. I've always loved to work in the garden, but once I had kids I just couldn't prioritize it like I used to. Hiring GGN periodically for a seasonal clean-up or a small project has helped me focus where I need to while keeping my own gardening a pleasurable, escapist experience. I also love that Rich and his team use eco-friendly gardening practices - they are the fastest hand-weeders you will ever meet, so save your back and hire GGN!

The best part of the service was that they use very quiet non gas powered tools and methods to revitalize the landscape. It was almost hard to remember they were present. They were also very knowledgeable and attentive to differentiating between weeds and non weeds and had a solid knowledge of native plants.

Description of Work
3 crew members trimmed all bushes, trees, and roses, cleared out all beds and applied organic mulch, weeded between stones in path, and cleared a substantial amount of blackberries off of bluff behind house. We were very satisfied with their service and prompt responses to our emails and calls.

Good Green Neighbors is currently rated 4.7 overall out of 5.

No, Good Green Neighbors does not offer a senior discount.

No, Good Green Neighbors does not offer warranties.