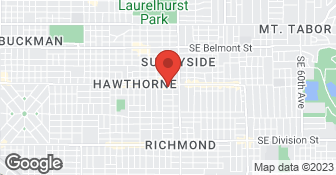 Description of Work
Set up and programmed a stereo system. Left me a nice little cheat sheet to use until I learn how to operate it!

They were courteous, professional and knowledgeable. They did what they said they would and finished earlier than expected at the cost we discussed. Good value. In addition, I was given several resources to locate hard-to-find pieces that were missing.

Outstanding particularly in terms of quickly diagnosing problem and working with manufacturer to get appropriate speakers. They now sound like new.

We had a broken amp and malfunctioning CD player. Thought they might be fixable. We checked Angie's List and got Fred's and one other recommendation. Called both, can't remember what happened w the other one, but the guy at Fred's said probably in our interest to replace both, rather than spend the money to try repairing them. Months later we went to Fred's to buy new equipmt, plus our speakers were over 40 years old! so we decided to replace them too. Bill White at Fred's was a jewel. Friendly, professional, helpful, willing to take enough time, and able to explain things clearly to people like us who were obviously clueless. Yet without being condescending. NO sales pressure whatsoever--none--completely, cleanly hands-off--even suggested we go for coffee and think about it on our own before deciding whether to buy. Once we bought the items, he assured us we could call him if any questions etc. We also could have had one of their people (for an additional fee) come out and set the equipmt up for us, but we ended up not needing that.

Description of Work
We bought a pair of speakers, an amp, and a CD player from them.

These guys are just the best. From Bill White, the manager or service manager, to the technicians (Dave is outstanding), I can't imagine a better customer experince. They are skilled, fast, thorough, of high quality, and polite. They fixed broken components, istalled new items, fixed various unrelated things with a smile. Highly recommended!

These guys are just great. The attention, service attitude and technical knowledge are just remarkable. I have not used other companies for high end installation so I can't compare, but I cannot imagine better personal care and service than I have received from Fred's. They have built a loyal customer in me. From Dave the technician to personal calls from Bill the store manager, these guys are just great.

Description of Work
I bought a house with a six year old, complex, high end audio and video set-up. It did not work fully and was confusing. Dave from service came out and got us going, added Sonos for the music, and figured out this comlex house set-up, while suggesting possible upgrades for consideration.

This is the second time I've had Fred's complete work in my home. They are always quick to complete the job and take time to answer any questions I have about our system. Thank you!

Easy to work with. Answered my questions to help me better understand how my network's setup and resolved my issues.

I took a turntable to be repaired and basically I walked in, dropped it off and it was really easy. They knew the problem right away. It just needed a new part. It was not expensive and it was a pretty quick turnaround so overall, it was a positive experience. The people who worked there were great.

Description of Work
We have used Fred's Sound of Music Audio Video Incorporated for stereo repair.

It went great! They told me I didn't need a new component and sent me home!

Description of Work
I brought in my old DVD player, which had quit on me, to be recycled, planning to buy a new one. The young salesman told me he was just going to check out the old one first. He dusted it off, connected it up, and lo and behold it worked. He wrapped it up and told me I didn't need a new one and if I had any more problems to call and they would try to help me with them. All this for nothing! I know darn well I would not have gotten this level of service at any of the big chains. I am totally impressed with this store and believe me when I really do need a new DVD player, this is where I'm going to buy it!

They came highly recommended and I would use them again.

Description of Work
They repaired a stereo receiver that was very old and valuable. No other companies could fix it. They immediately diagnosed the issue. They were extremely proficient in their repairs. They have very knowledgeable sales people.

They checked in a couple of times before doing work that we might not have wanted. They seem very honest, knowledgeable and reasonably priced.

Description of Work
Repaired an old Dual turntable (is "old" and "turntable" redundant?).

EVERYONE ON THE TEAM FROM THE SALES STAFF TO THE INSTALLERS WERE VERY PROFESSIONAL. ALSO, FRED'S SOUND OF MUSIC HAS A 30 DAY PRICE MATCH GUARANTEE. AFTER OUR TV WAS INSTALLED WE FOUND IT ON SALE AT A LARGE CHAIN STORE, SO THEY GAVE US A REFUND FOR THE DIFFERENCE.

Sean Murphy comes from a large family and learned the trade from his dad in Oregon at the age of 14. Since then him and his team help homeowners with their electrical needs, everything from recessed lights to electric vehicle chargers. Murphy Family Electric strives for providing the customer valuable skilled trades at a good value for the customer.  …

Callahan Electric is a small shop that focuses on detail and price. We are less expensive from most shops because our overhead is low, and our attention to detail is why we have lots of repeat business and many referrals.  …

Fred's Sound of Music Audio Video Inc is currently rated 5 overall out of 5.

No, Fred's Sound of Music Audio Video Inc does not offer eco-friendly accreditations.