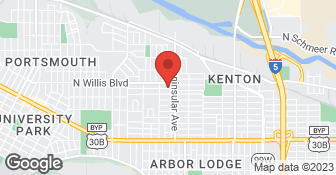 I am a tile contractor who specializes in stone and tile installations. I been in business for 29 years, with experience in all areas of installation from mud set showers, stone walkways, glass tile walls and large dimension tile counters with custom polished edges. I will meet with you to determine the scope of the work, design choices and installation methods. There is no charge for a bid....

The work went very well. There were several things that made this job a bit challenging. First, we used tile that was custom made for us by a local tile artist, and as a result, there was slight variation in the size of the tiles. Secondly, the mantel above the fireplace is not completely level. Third, our fireplace is flanked by built in wooden bookcases, and some of the tile had to be cut to fit around part of the bookcases. Mike did a great job of dealing with all of these challenges and making the installation look really beautiful. The kitchen was probably not as challenging but again, Mike did an excellent job and we're very pleased with the result. Mike is very professional and is very easy to work with. He shows up on time, does exactly what he says he's going to do, and cleans up after himself. I highly recommend Columbia Tile Art Contracting!

Description of Work
Installed custom tile on our fireplace surround and hearth, and replaced our kitchen backsplash with new custom tile.

We called at least 4 tile contractors on Angie's List, and Mike was one of two who actually returned our calls. He came out the next day to bid the project, which was installing subway tile backsplashes in two kitchens. We had previously purchased the tile with the idea of doing the work ourselves, but were running out of time and energy. He offered advice on how to prepare for the tile jobs and, then after we had selected his company to do the work, he came out that very day to remove some old tile from one of the kitchens and replace the drywall, as we were having new countertops installed the next day. He charged us $120 for that, which we were happy to pay, as we did not want to do this ourselves and it really was very short notice to him. Then, one week later, he came back, and over 4 days, installed the new tile backsplashes in both kitchens. They turned out beautifully, and we are very happy with Mike's craftsmanship and our new backsplashes. Mike is just a nice fellow: very mellow, not rushed. We intend to use his company again in the future and certainly recommend him to others.

Description of Work
Mike tiled backsplashes in the two kitchens in our duplex. He also removed old tile in one kitchen and replaced the drywall before installing new tile.

He was incredibly patient with my horrible scheduling. He knew his craft with high craftsmanship. Would use him again. Would refer him to others.

Description of Work
Installed tile in 1927 bathroom. Did a great design around sink.

Mike very patiently helped me design a plan for placement of travertine tile with glass and stone accent for our shower. His suggestion about how to incorporate the accent pieces with the travertine turned out beautifully. He also had to finesse the tile we had chosen for the shower floor to make it drain properly. Mike had a suggestion for how to incorporate a touch of the travertine in with the ceramic bathroom floor tiles. Looks great! Fortunately, the wine cellar floor was a little more straight forward but is also just lovely. Mike's prep work is expertly done. We have been going through the permit process with City of Beaverton inspectors and the inspector that came for the plumbing said Mike's work was excellent and the best he had seen in quite a while. Mike also took great care in making sure the walls and floors were level as he installed the tile. When the glass was measured for the shower enclosure, they said it was unusual to not have to compensate for unlevel tile around soffit areas. Ours was perfect. Mike Patunas is a soft spoken, thoughtful man who was a pleasure to work with.

We had Mike install tile on 2 full height walls, around the window opening, as well as the shower pan, shower shelf recesses and floor. I had very specific thought on how I wanted the tile joints to lay out. Mike did an incredible job. He takes a lot of pride in what he does. The tile cuts he does to make things turn out just right are really impressive. He is also extremely nice and easy to talk to.

Description of Work
Mike did the tile installation for our Master Bath shower and floor, and Hall bath floor and base

Mike is really an outstanding craftsman. His attention to detail, his design suggestions and his rapport with clients are amazing. He is thoughtful and articulate and it was a pleasure having him on this project.

Mike's work was meticulously done and artistic. He worked well with our contractor, designer, and us. He was responsive to our needs. Our tile and stonework is beautiful---we love it! Mike can be reached at pajunas1847@comcast.net.

Description of Work
Mike did all our tile, travertine & limestone work in our complete remodel. He completed two large showers including working around a shower window and putting in inset shelves; floors (including a complex Versailles pattern for a curved hallway, family room, bathroom, laundry room and wine room), backsplashes for the kitchen and bathrooms, and glass and granite insets. He installed heat under the travertine floor and the limestone floor. He cut limestone to make our shower floor when there was no matching floor tile, and worked with our granite contractors to install a granite border in the floor of the shower and at the top of glass tiles. Mike worked with our designer to create a limestone and glass half wall behind our tub. He fashioned travertine molding for the floors, and covered two uneven steps with travertine.

Mike pajonas is great, very professional is there when he says he will be communicative asks the right questions & resolves issues if then arise. Good quality at a good price & clean within the workspace. highly recommend !

Work finished on time with very attractive results. He inadvertently caused a water leak but fixed the problem at his expense within 24 hours.

Description of Work
Columbia Tile Art Contracting graded the ground and installed a series of flay stones and custom steps.

He was wonderful ! His price was reasonable, worked carefully, and his work is beautiful. He is a master tile layer.

Description of Work
Mike, did all tile in bathroom, fireplace and foyer. This was floors and shower tub areas.

Always a pleasure to have on job. Hardworking, thorough, self motivated. Good client interaction, creative solutions to design challenges. No callbacks, most important.

Description of Work
Tile installations from simple back splash to complex mortar set tubs. Working with clients/architects on design and layout of tile materials and install.

Hardwood Floor Specialist LLC is a family-owned and operated business. We’ve been working with hardwood floors for over 20 years. With years of experience we put our guarantee on every hardwood flooring installation without hesitation. We specialize in hardwood floors of many kinds of woods and can customize and install a new wood floor for your home or office. We can also refinish old, worn-out floors to restore the warmth and charm of your home or office. We will work with you to ensure that your new floor or restoration project is effortless for you. We will discuss with you all options and help you make the best decision. We take your flooring project personally and follow through from start to finish. At Hardwood Floor Specialist LLC, we don’t just want your business. We want your repeat business... and your friends’ business... and your family’s business, and this only happens by going above and beyond your expectations, for a great hardwood flooring installation. Hardwood Floor Specialist LLC is fully Licensed, Bonded and Insured  …

Our focus is truly on providing you with the best customer service and the highest quality of work. Since we are not structured as a retail store, but as a warehouse we don’t have the mark ups on our products like our competitors. This allows us to pass on significant savings to you! On average we are 15% to 35% less than any of our competitor’s SALE prices!  …

Bonded
Insured
All statements concerning insurance, licenses, and bonds are informational only, and are self-reported. Since insurance, licenses and bonds can expire and can be cancelled, homeowners should always check such information for themselves.To find more licensing information for your state, visit our Find Licensing Requirements page.
General Information
Free Estimates
Yes
Eco-Friendly Accreditations
No
Payment Options
Check
Senior Discount
NO
Warranties
Satisfaction

Columbia Tile Art Contracting is currently rated 5 overall out of 5.

No, Columbia Tile Art Contracting does not offer eco-friendly accreditations.

No, Columbia Tile Art Contracting does not offer a senior discount.

No, Columbia Tile Art Contracting does not offer warranties.

Are there any services Columbia Tile Art Contracting does not offer?