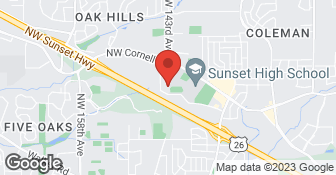 We are a premier auto glass repair and auto glass replacement glass company in the Portland Metropolitan area With 2 locations to serve you...NW Portland and Tualatin. Auto glass replacement and ADAS calibration in addition to specializing in all cars, trucks, and SUV's also high end European cars like BMW, Mercedes Benz, Mini Cooper, Volvo just to name a few. We work with all Insurance Companies and 3rd party billing networks like Lynx Services, & Safelite Solutions. All of our Technicians are fully Certified with years of experience. We offer Free mobile service to anywhere in the Portland Metro area. Our Warranty is a Lifetime No Leak Guarantee for as long as you own your vehicle....

I had never had a rock chip in my windshield before so I had no idea where to go to get it repaired. I was looking for a company in my area that could schedule me ASAP as both my dad and my husband were concerned that the chip would spread into a crack across my windshield quickly because it was a little deep. I checked with a few companies online and compared prices and responsiveness and appointment availability. Collision Auto Glass surpassed them all in every area!! They answered my call immediately, offered to repair it same-day with no appointment necessary and quoted an estimate that was a fraction of amount of the other quotes I had received. Added to that, they are a locally owned company and since my husband is a small business owner we do enjoy providing business to local companies over corporate giants whenever possible. Over the phone Brad told me it would take about 30 minutes to complete the repair. When I arrived at the office, I was seen right away, he sat down with me and was honest about the repair process and how it would look BEFORE he started work. I was in and out of their office in about 20 minutes! I will definitely use Collision Auto Glass again if the need arises and I highly recommend their service!

Everything went very smoothly. They guided me in getting my insurance claim started and then worked with the insurance company to get approval. Once they had approval and the parts they needed (a couple of days), they called and set up a repair time. At the set time someone from the shop picked up the car and took it to the shop. They brought it back when they were done. Because of the Eyesight system on my car, they had to recalibrate the system after replacing the windshield. They have the equipment to do that. I was impressed with their professionalism and service. I would certainly use them again.

On time and performed with no problems.

I have been contemplating for a while if I should post this review or not but I came to the conclusion that I should let other people know about how their experience with this company could be, I am sure that some people have had no problems, and maybe some people don't expect much but I do and I am disappointed with the service and product I have received. I sent out a request for a quote to replace the windshield on my 06 BMW 330ci on a Sunday, Monday morning I get a reply back from Brad with a quote and after some emailing back and forth with questions I had I said go ahead, Brad called me shortly there after and set up an appointment for the coming Friday that week. The technician (Frank) shows up at my work and he was very nice, and replaced the windshield. Later that day when I drove home from work I noticed that the windshield was severely wavy and uneven, everything you looked at got distorted. I sent Brad another email and he said that I should come in on the following Monday so that he could look at it. I get there and some guy (don't know his name) took my car to look at it, a few minutes later Brad comes up and said: yeah, that's pretty bad so wee will have to replace that for you, I ask him how long it would take and he said that they would get the new glass the next day and that he would get back to me. Tuesday goes by and I don't hear anything, Wednesday I email Brad again asking how it's going with my windshield, he said that it was scratched so they had to order another one. On Thursday I email Brad again asking how it's going with the replacement windshield, he said that they have ordered another one and if that one looks good they can install it the day after (Friday) On Friday I email Brad again asking about my windshield, he said that the warehouse didn't ship it on the afternoon run they sent it on the morning truck and that the windshield was looking good, he asked me if I wanted to come by their shop to look at it first or just have it installed Monday, I told him that I would trust him on this one and have them install it Monday, I also told him that it was the same address as the first time. Monday comes around and I get a call from Frank that he will be there in a few minutes and he asked if the address was right that he had, I told him no, that's my home address, I told Brad that the install would be at my work again, apparently Brad didn't tell him this. Frank finally shows up and he shows me the new windshield asking me if it it looks good, I said yes, but it's hard to tell before it is actually installed on the car and you are sitting in it. Frank installs the new windshield leaving black adhesive on the front fenders, this stuff is hard to remove! As I drive home from work that day I don't see much " waviness and distortion, the lower corners are bad and the passenger side is not all that great but what I did notice was that the glass has like tiny speckles in it, you can clearly see them when the sun is low, like in the morning and evening, so now I have a new windshield that looks pretty much the same as the original one I replaced because it was pitted. To sum things up, if you want good quality glass and no hassle you should not go with this company, This company's business practice is clearly to sell cheap seconds glass, take your money and not standing behind their services at all, everything goes fast and painless up until you get the new glass installed, but if you have any issues afterwards things slows down drastically. They brag that they are the preferred glass installer for Kuni BMW, that makes me wonder about Kuni's business ethics, does Kuni really stand behind the quality of the materials used by this company? So, if you want glass that is of good quality and want good customer support stay clear from this company, don't say I didn't warn you.

Scheduling was a breeze and the replacement was great.

Thanks [Member Name Removed] for your business!
5.0

Called for price and was given a quote and was asked if I want to schedule the job. Told him I would get back to them, called a couple of days later and was given different quote. When I asked why the difference was told market pricing but was quickly told they would honer the first quote. Scheduled the work and upon my arrival was greeted by name and shown the waiting area and offered coffee. Work was done quickly and professionally, received vehicle back clean.

Thank you [Member Name Removed] for your business and taking the time to write a review!!!
5.0

Description of Work
They replaced my windshield. Scheduled the service quickly, were on time, absolutely professional & it cost slightly less than the original estimate!

Thank you [Member name] we appreciate your business and taking the time to say good things about us!
5.0

They did clean work being careful to not break the expensive windshield cap that's very hard to get off the car in one piece. They used the correct moldings and were just a little ( few minutes ) early, ready to work with a friendly & competent attitude . They did not rush the work, being careful to see each aspect of the job complete before moving on to the next and overall I could not be happier with the results. I would definitely have these people do my next windshield replacement.

Description of Work
Replaced the windshield in a 2007 Toyota FJ Cruiser in the parking lot of my home.

Thank you for all those kind words, and we appreciate your business!
5.0

They did a great job! Billed my Insurance Company it was very easy. They were referred by my dealership Kuni BMW

Description of Work
Replaced my windshield on my BMW X5

I meant to write a review ages ago after the service but never got around to it. This was the third time I've used these folks for rock chip and complete windshield replacements and they are great! Highly professional - used to working on BMW's and high end cars - responsive and helpful. Highly recommend.

Description of Work
Repaired rock chip on new Subaru. This one didn't bring the windshield back to nearly perfect as my previous repairs have, but the repairman warned me it may not - however I still trust this provider to do the best job possible.

Thank you for taking the time to write a review on Angie's List. We strive to please every Customer and achieve this through quality work, honest pricing, and good communication. Thank you again for your review and your business!!!

4 EMPLOYEES. NO SUBS. COST IS DETERMINED BY THE JOB. NO TRAVEL CHARGES. ASK ABOUT ANGIE'S LIST DISCOUNT.  …

Insured
All statements concerning insurance, licenses, and bonds are informational only, and are self-reported. Since insurance, licenses and bonds can expire and can be cancelled, homeowners should always check such information for themselves.To find more licensing information for your state, visit our Find Licensing Requirements page.
General Information
Free Estimates
Yes
Eco-Friendly Accreditations
No
Payment Options
Check, Visa, MasterCard, Discover
Senior Discount
No
Warranties
Yes

No window tint, no classic cars or restoration work

Collision Auto Glass Inc is currently rated 4.6 overall out of 5.

No, Collision Auto Glass Inc does not offer eco-friendly accreditations.

No, Collision Auto Glass Inc does not offer a senior discount.

Are there any services Collision Auto Glass Inc does not offer?

No window tint, no classic cars or restoration work