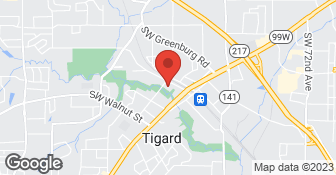 Stuff Adjust is a unique, highly personalized organizing company for your home, office and life with a focus on recycling and donation. At Stuff Adjust, our goals and guidelines are to: * Help you reclaim your peace of mind through organizing. * Refresh your space by rearranging and reusing. * Help reduce the amount of stuff occupying your space. * Remove what is no longer wanted, needed or useful to you. * Promote reuse through donation. * Recycle as much as possible. * Respect you and your stuff.  …

A Cut Above Woodworking

A Cut Above Woodworking has been serving the Greater Portland area since 1993. All of our work is custom built to your specific job. We Design build high quality cabinets that will last and make your home improvement a great investment.  …

Getting our home organized was a huge priority. We needed an affordable solution in order to address each room so we decided to do it ourselves! We discovered Closets To Go who specializes in CUSTOM closets AND offers a DIY (do it yourself) option and couldnt be more pleased! We were surprised how easy and quickly the installation was especially after the first one. Everything looks SOOOO professional and it was a fraction of the cost doing it ourselves. Our home is way less chaotic now, the kids actually enjoy putting their toys/clothes away and I get alot of pleasure out how organized my family has become. We highly recommend Closets To Go. If we can do it, you can do

Description of Work
All closets in our house and pantry

We knew what we wanted and they were very good at listening to us and quoting the closet we wanted. Several other companies wanted to sell us what we didn't want. Their price was fair and service was great. We ordered the closet components and they were ready one week later. A friend and I installed the closet in just 5 hours.

Description of Work
They provided a closet system/organizer for a new 8' x 10' walk-in closet.

The end result of my closet system turned out very nice, the designer was knowledgeable and friendly and the product was well made. However, I did experience some challenges with this company. I received a bid for a walk in closet system for $1855, and then I purchased an online deal in the amount of $250 from Half Off Deals Portland. The deal was supposed to result in $1200 off of a closet system. I was skeptical of the deal before I bought it and spoke with the company owner, who assured me it was a legitimate deal. However, after I purchased the online certificate I received a second bid from the company in the amount of 2856 for the exact same closet. After questioning the price change, the owner of the company explained that the voucher I purchased could only be applied at MSRP and that original bid already included a deal that I never knew I was receiving. I checked the voucher, website and my bid documents and found no mention of these price adjustments. So, in the end the voucher made no difference to the cost of my closet system at all, and I ended up paying the same amount as the original bid- despite the "deal" I had purchased. This experience verifies for me that these types of deals usually don't amount to much and can be more trouble than they are worth. The owner did offer to purchase the voucher from me to address my concerns but in the end I decided to proceed with my order given the amount of time I had already invested. Additionally, upon pick up we had to go back to the shop twice for missing parts to the system.

Description of Work
I purchased a closet system that we picked up and installed on our own.

They arrived on time and were professional, but the shelving is too narrow to hold our bins, as they tip out of the shelves if we load them with the narrowest end out. That means we have to load them with the widest part completely on the shelf so that the bins are not unstable. This leaves a tiny bit of useless space on each shelf. In addition, the shelves are not terribly strong for garage storage. They would be fine in a closet, but are not really adequate for the garage. They have been a big disappointment, and I would not be surprised if we decide to remove them at some point. The gentleman who 'designed' the space really did not do his job well. He should have measured the items to be stored to ensure that the shelving would accommodate everything. Quite frankly, for what we paid, I think I could have done as good a job. There also was no follow-up to see how satisfied we were with their product. I would NOT recommend this company.

Description of Work
The provider came to my home to see our garage where we needed shelving. He could see the bins we had and we told him how high we wanted the shelves to be. He did not have any product with him, so we were unsure of the quality of the shelving, and had to go to their warehouse/store to see an example. We had to pay extra for our shelving, which I felt was simply their way of upcharging to recoup their cost of selling through Angie's list.

The new design really improved our storage space. It is much cleaner looking and has lots of new spaces to store our shoes and bags along with the usual space for hanging clothing. Their final design took into account access panels and floor vents.

This seems to be a pretty good company but WATCH OUT FOR THOSE "BIG DEALS." I purchased an Angie's List Big Deal to get $1,000 worth of cabinets for $500. Nowhere in the fine print did it mention that the $500 would not apply to delivery and set-up, nor did it mention the cost of that. It turns out that, for the two tall cabinets I wanted (that cost $775), delivery and installation in my garage would be $350. That meant I would actually be spending $850 rather than $500. And I felt the $350 fee was way too high to install two cabinets that sat on the floor. I called Angie's List to protest and they called the company, which refused to budge on the delivery fee or use any of the $225 left over from the cabinet order to cover delivery. I then called the sales person who had come out to my house. He was willing to work with me and found what I felt was a good solution. The cabinets are of very good quality and the set-up, which would have cost me $350 out of pocket, only took about 45 minutes. So if you are taking advantage of a special, be sure to find out about the installation fees, which are based on the length of the cabinets.I can see how that would make sense if you were having lots of cabinets and shelves and rods installed in a closet, but not for my situation. I would use this company again, but would make sure I was clear on all the charges before I placed my order.

Description of Work
Built and installed two large cabinets in my garage.

Wendy Jo also designed a plan so that I can, in the future, add more cabinets in the garage. I did end up having to pay more that the initial $199 advertised to get two large cabinets that go floor to ceiling. But the fact that I can add on in the future is very appealing to me. They were ordered and delivered very promptly and installation went smoothly as well. I would definitely use them again and highly recommend them and their services.

The closet looks fabulous, but it is a small closet, so I thought they would have done it for $500, but I had to pay $160 more. The closet looks really organized, and the guys were really fast and efficient. I had to do some work on the closet before they worked on it, and so as soon as I called them, they came and did it. They charged $136 for one more hanger. It is an older home, so I wanted it cut out, but they don't do that, they only organize it. I don't know if I would refer them, just because they are so expensive. They were all nice enough, and they did it well enough. I called them, and it was scheduled for a Monday, and she said that she will make sure they were coming, and would call me back. They didn't call me back, and then they just showed up. They showed up right on time. They were here at 9 in the morning, and that was good. They were very professional.

Description of Work
I had purchased a big deal for Closets To Go. They put shelves and hangers on each side of the closet.

We cannot say enough good things about our experiences with Closets To Go. In December 2013 we consolidated two households into one condominium and needed to maximize our storage space in our new home. Closets To Go designed and installed a coat closet, bedroom closet, walk-in bedroom closet and laundry room storage area for us. Their design ideas were far superior to those of another closet company we consulted. They asked questions to assess our needs and constructed designs that absolutely maximized the use of our space beyond what we could have imagined. They were prompt in presenting design ideas and thoroughly professional and efficient in the installation and cleanup of our new closets. We could not have been more pleased with the design work of Craig Mulkey and the installation work of Chris and Thomas. In the spring 2014, we started working with a designer and cabinet maker to create a built in storage/display cabinet for our living room. After they returned to us with a proposal at twice the cost we had budgeted, we contacted Closets To Go to see if they might be able to help us. Craig Mulkey did an outstanding job improving on our original ideas to produce an original wall unit that we are ecstatic about at slightly more than 60% of the cost we were quoted by our designer and cabinet maker. Thinking that Closets To Go is essentially a company that concentrates on building closets and storage units, we were concerned that designing and building a living room cabinet might be outside their usual product line and were concerned it might look like a closet piece, and not a living room unit, but it turned out beautifully. Thanks to Craig for his patience, creativity and perseverance in arriving at a final design, and to Chris and Justin for their work on the cabinet installation. We believe they all reached beyond their usual work in creating this piece for us and did an outstanding job at a reasonable price. We give Closets To go our highest endorsement.

The work and scheduling both turned out fine. They work with your needs and in determining how to build it to your specific needs. I didn’t have any issues.

Description of Work
They helped with our children’s bedroom closet.