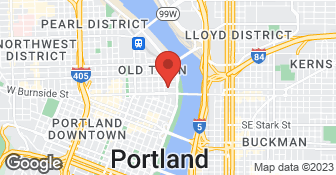 It went great! He was available the same day and was here on time. He was able to move the fridge and tell me what was wrong with it within a few minutes. He ordered a part and picked it up and installed it the next day exactly when he told me he would. He was very nice, professional, and didn't comment on all the dirt we discovered under the refrigerator. The price was reasonable, and I will definitely call him the next time we have a problem with one of our appliances.

Description of Work
Replaced fan motor in my GE refrigerator

I called them and they were able to come out right away for same day service. They fixed my refridgerator, and it was much less costly than if I had had to buy a new one!

Other than than the charge being somewhat higher than expected everything went well.

Description of Work
Secured the vent pipe on our dryer.

Called for service around 12:30 pm today and was told schedule time will be between 4 to 6 pm. Mike came at 4:20pm turn on the washing machine, knew exactly what was wrong, repaired the problem in 10 minutes and was done. He was prompt, fast, clean and friendly. I wonder if being a Angie's List member if I can get a discount? Oh well...too late, I will definitely hire again.

He always comes promptly and does an excellent job.

Description of Work
He has fixed both my washer and dryer several times over the years.

He did a great job.

Description of Work
He dealt with my icemaker. It was a frozen line. I've used him 2-3 times in the past.

They responded same day and arrived right on time Man went to wrok immediatley and was very efficient. Had the entire task completedd in 25 minutes Very competent--knew exactly what to do.

Description of Work
Removed glass particles from the Pump area

Description of Work
repaired leaking dishwasher and ordered a new handle and installed it.

Several times he has fixed our Whirlpool washer when it shorted out by wiggling too much when over loaded. Last time he found out that our CCU board in our washer is failing. He also fixed a water temperature problem with our washer.

Description of Work
Mike is excellent. He is punctual, honest, and knowledgeable about appliances. I have used his services in the past for our washer, dryer and refrigerator. And I will continue to use his services. I would highly recommend him to any home owner.

Service man found that there was nothing wrong with the machine. The problem was the power supply. He only charged us the minimum service fee. Nice to know there are honest service providers out there.

Response was quick, work was done and company called with clear explanation of work performed and cost.

Description of Work
ABC Appliance was available when needed (next day). Work performed was on a clothes dryer which needed a thermal fuse kit replacement. Total price seemed a bit high, but was given a discount for Angie's List. ABC called after the service visit and explained what was done and collected payment via credit card. Getting the receipt seemed a bit slow (almost 2 wks). Overall, would use ABC again as I appreciated his quick response to an urgent need in a rental house.

Very professional--showed us what was causing the problem. Would and did use again later on washer issue.

Description of Work
Dishwasher wasn't draining. They removed extra portions of the drain hose and the problem was solved. Standard diagnostic fee of $79.50 + $20.00 labor.

Went so great we have hired them to repair our stove as well.

They acted professionally, but the price was a little higher than I wanted to pay.

Description of Work
The came out and gave me an estimate.

It was easy to make an appointment that fit my schedule. the repairman arrived on time. He removed the pump and cleaned out some coins. he then turned the washer on and he remained to observe through most of the spin cycle but not all. he took the model information for the microwave so he could check on the availability of a needed part. after he left, the washer stopped at mid cycle again. He came back and did not charge for the service call, but the part he brought for the washer did not work. From his comments it was clear that had he stayed all through the cycle the first visit, he would have seen where the cycle was stopping and would have known which part to bring. So, we needed a third visit. in addition, he had misplaced the microwave information and didn't have anything with him at the second visit to fix the microwave. at that point i was irritated at needing the third visit, so told him to forget the microwave. he returned with the washer part, fixed the machine and it works fine. bottom line: if he had spent a few more minutes at visit one, he probably would not have needed visit 3 (nor would i have had to re-arrange my work schedule so i could be at home on 3 separate occasions).

I believe this is not my company. we do not work on microwaves.
5.0

It was fine. They were available within a day or two after we called. They worked quickly and he had the part with him and the machine is 35 years old so that was impressive.

Description of Work
They replaced an internal hose in the washing machine that was leaking.

A little after ll am, I was called for directions and to let me know he would be arriving before noon. When I explained the problem in more detail. I was told it sounded like the condenser motor, which he fairly quickly replaced and the refrigerator has worked well since.

Description of Work
Late in the afternoon I realized my refrigerator was not cooling properly. I called at approximately 5pm and was told, after I described the problem and model of refrigerator, that a serviceman would come between noon and 2 pm the next day.

Although the Yellow Pages ad claimed "same day service" the gruff person on the phone scheduled us for two days out and did not want any more information beyond "it leaks." The technician arrived as scheduled and repaired the leak. Even though we were able to point directly to the source of the leak, he started from scratch diagnosing the problem, then proceeded to replace the leaking injector. The technician refused to replace the aging internal hoses as requested claiming it was not necessary. After completing the repair, the machine was not repositioned back into the original spot against the dryer, but simply shoved sort of close. We had to put it back in place ourselves. We were charged for both the technicians time and a $51.50 diagnostic fee, even though the problem was obvious and pointed out. (I guess we are spoiled by high quality service from Division Matag, which went out of business.)

Description of Work
Repairman was called on Tuesday to repair a pin hole leak at the injector of our 29 year old Maytag washing machine. The machine was leaking water on the floor during operation and could not be used. We also requested that the internal hoses be replaced due to age and deterioration as a preventative maintenance item.

THE REFRIGERATOR WAS FIXED TEMPORARILY, BUT AFTER THE SECOND TIME, IT HAS WORKED CONTINUOUSLY WITH NO PROBLEMS. BECAUSE OF THE GREASE PROBLEM, WE WERE ADVISED TO REPLACE THE WASHING MACHINE AND ALSO GOT A DRYER AT THE SAME TIME, BUT IN THE INTERIM THE DRYER WORKED BETTER AFTER THE LINT WAS CLEANED.

Description of Work
THEY CAME TWO DIFFERENT TIMES FOR THE REFRIGERATOR. THE FIRST TIME THEY REPLACED A DEFROST THERMOSTAT AND ANOTHER TIME, PUT IN MORE FREON AND LEAKSTOP. PREVIOUSLY, THEY HAD DIAGNOSED THE CLOTHES DRYER'S OVERHEATING DUE TO LINT BUILDUP AND ALSO DISCOVERED A GREASE LEAK IN THE WASHING MACHINE.

THE PROBLEM APPEARED TO BE SOLVED, BUT THEN HAPPENED AGAIN TWO WEEKS LATER WITH THE ADDITIONAL PROBLEM OF THE ICE MAKER NOT WORKING. HE ALSO COMMENTED ON THE FACT THAT HE HATED WORKING ON AMANA'S! I WAS CHARGED $40 FOR SERVICE TIME, $40 FOR SERVICE CALL, AND $26.50 FOR THE PART. PRETTY STEEP! I CHOSE TO CALL ANOTHER COMPANY TO HAVE IT FIXED A SECOND TIME.

Description of Work
REPAIR OF THE WATER DISPENSER ON MY AMANA REFRIGERATOR.

our warranty goes 90 days on the work we performed, coming back a 2nd time is at no charge except new parts or a different problem, which the ice maker was a new problem, you chose not to fix it, we did`t charge a new call to the door even know the ice maker was not on our warranty. price of 106.50 is actually an extremely good price since 26.50 for a part is almost unheard of now days. the service call then was 39.50 a lot cheaper then most of our competitors.parts cost are based on the distributes suggested retail.

Hajek Heating & Cooling, LLC is a small, family-run company that specializes in Emme Controls/Home Comfort Zoning. Whether your needs include a small repair or a full-system upgrade, we can work within any plan and any budget.  …

Whether you just need a simple boiler repair or a complete AC replacement, Pyramid Heating & Cooling is ready to help. With over 15 years of experience, Pyramid Heating and Cooling is Portland’s premier source for all things HVAC. As a Carrier factory authorized dealer, Pyramid offers a broad range of services and systems. The company’s team is made up of NATE certified and highly skilled technicians. They are the experts when it comes to repairing, installing, and maintaining any heating or cooling systems including furnaces, boilers, radiant heating, central air conditioning, heat pumps, ductless units, and even geothermal system. Additionally, the company offers proven and innovative indoor air quality solutions such as air purifiers and humidifiers. Call now to experience your best comfort at home. Pyramid Heating & Cooling is also on-call 24/7 for emergency heating and cooling services in Portland. Free estimates and financing options are available.  …

Climate Control provides high quality residential and commercial heating, air conditioning and indoor air quality systems, repairs as well as scheduled maintenance services. These systems include the client’s homes and businesses. Climate Control, established in 1989, focuses in the add-on, replacement and HVAC service business in both the residential and commercial marketplace. The company grew out of a vision of the owners to focus on the service and add-on replacement business. The founder’s previous HVAC service experience was commercial only but saw an opportunity in the residential add-on, replacement and service business that was under served. By focusing on long term relationships through planned maintenance and providing high quality HVAC repair and service, the company established a loyal client base. With a specific focus, the company can achieve consistently higher standards to benefit the client.  …

Bonded
Insured
All statements concerning insurance, licenses, and bonds are informational only, and are self-reported. Since insurance, licenses and bonds can expire and can be cancelled, homeowners should always check such information for themselves.To find more licensing information for your state, visit our Find Licensing Requirements page.
General Information
Free Estimates
No
Eco-Friendly Accreditations
No
Payment Options
American Express, Check, Discover, MasterCard, Visa
Senior Discount
5%
Warranties
Ask For details

ABC Appliance Inc is currently rated 4.6 overall out of 5.

No, ABC Appliance Inc does not offer free project estimates.

No, ABC Appliance Inc does not offer eco-friendly accreditations.

No, ABC Appliance Inc does not offer a senior discount.

No, ABC Appliance Inc does not offer warranties.