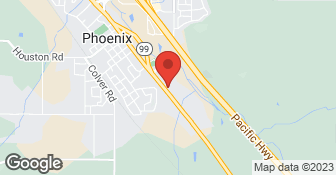 Since 1991, Welburn Electric, Inc. has been providing quality electrical service for residents in the greater Phoenix, OR area. We offer 24-hour emergency service for residential, commercial and industrial customers. We specialize in electrical design and construction. For troubleshooting, we use state-of-the-art testing and methodology to get right to the heart of the problem. Our services include: Service changes Remodels, additions and new construction Troubleshooting Certified cabling Design/build Power quality monitoring Call Welburn Electric, Inc today for all your electrical needs. Be sure to ask us about our green energy technology

It went fine, no headache. I had my panel updated and is now a 200 Amp Panel. We have an older house and had them install GFCI breakers for all the non-grounded circuits. They could have cleaned up better, drywall dust was left on the floor of the garage, but you know, its a garage and I have a vacuum.

Great! Sean showed up as scheduled, was efficient, professional and friendly. We are so glad we called Welburn Electric and will call them again if we want more work done in the future. And, we'll be sure to give a good recommendation to neighbors too.

Description of Work
We had 5 LED ceiling lights installed and changed one faulty wall switch. We purchased all fixtures and the switch, Sean installed them.

Sam is fast and efficient, everyone loves him.

Description of Work
They cleaned up some wiring that wasn't done properly before I bought my house and hung three lights and a ceiling fan.

Description of Work
Installed electric to an outbuilding in back yard. Very good job and done on time.

Description of Work
House was being sold and the smoke detectors needed to be upgraded. They were busy and had to book the service at overtime hourly rate.

Description of Work
He came in and without delay found the problem with my electric outage. He explained the reason and what to do so it wouldn't happen again.

Description of Work
Upgraded some panel connections and rerouted a circuit in the basement. Sam was very efficient and finished in a short time.

Description of Work
replaced a bathroom fan. I had two other electricians here to do my other fan and it took them one hour! Sam did the work in under one hour and explained things I did not even think to ask. Wish I had found Welburn Electric before, they are now my only electricians

Description of Work
It was ok, liked my previous electrician better, but he is out of business.

Very professional, with job will done. They will be my first call in the future.

Although they are based in Phoenix they have a local electrician in G.P. He was exceedingly punctual, informative, and worked quickly. He was friendly yet professional. I didn't have one of the fixtures I needed to change so when I had it he returned to install it. They offer a senior discount. Their charge per hour was considerably better than one of their local competitors.

The work done by the tech was pretty good. He was very nice, and worked quickly. I thought it was strange that the company decided to bill me, instead of just charging me on the spot (especially since this wasn't a complicated job). Upon receiving the bill, I was surprised that it charged me for 1.5 hours of time, when I know for a fact that he was here exactly 60 minutes (almost on the dot), as I noted when he got here and when he left my house. When you are paying $80 an hour, that adds up. The second, and more minor thing that annoyed me was how much they charge for Oregon Minor Labor permits. Don't get me wrong, I know it's needed and have no problem paying the actual cost for me, but they shouldn't be selling permits to make a hefty profit. Per the Oregon Building Codes division, contractors are charged $140 for 10 label permits. This company charged me $30 for one....when the actual cost is $14. Over double markup! These two things gave me a real sour taste in my mouth, so I will not be recommending this company to anymore. I don't appreciate being nickel and dimed at every opportunity.

.Went very well. Alan sent a young man named Brett that was very good, efficient, and knowledgable. He quickly repaired the items on my list and some that were not. He also noted that our main panel did not have a surge protector and he installed this item too - plus the price was very reasonable. We just had our home repainted and the wood floors redone, he was very careful and took off his shoes on a cold day to boot.

Description of Work
I purchased a bank repo that needed quite a bit of electrical repairs. Alan was not the lowest price but he came well recommended by my realtor and listed on Angie's List. The home was a newer home but the prior owner took a lot of fixtures and did some re-wiring that was not to code.

He was very knowledgable about what was needed to pass inspect for pools, and gave generously of his time and expertise. Also allowed us to buy the necessary wiring through him, which saved us quite a bit. After the work was done, he came back and spent time inspecting, making suggestions, and overall making sure everything was done EXACTLY to code, and safe. We are very impressed, and would definitely use them again. They take safety very seriously, and we appreciate that. This is our second experience using Welburn, and both times were very satisfied. Highly recommend them. Feel they are not only knowledgable, but trustworthy. We had contacted some other electricians first, simply because they were very close to us (we now live almost to Central Point). But it was exasperating! They either didn't know much about the electrical requirements to putting in a heated pool, and tried to fake it. Or, they were unprofessional and it was like pulling teeth to get a call back. Or, one said he would come over, yet TWICE flaked out and didn't show. When WE called him, he always had an excuse. We finally called Welburn, even though they were farther away. And now we are very glad we did. It's nice to deal with people who are dependable and have integrity!

Description of Work
We were installing an above ground pool, with heater, large pump, and filter. Needed new heavier electrical panel with grounded outlets, etc. He inspected the grounds, the pool equipment, what was needed to make this safe and effective, and gave detailed suggestions, and an estimate for work and/or materials.

. Some of our house power was off, and the usual tipping back the switch on the fuse box did not work. Their response was prompt, and the electrician competent. There was a simple fuse box solution. The repairman was not here for more than two minutes, but we paid the standard housecall charge of $60.00. (The electrician apologized to us.) We understand that the company expended time and manpower to attend to our problem, and we learned something, but we would wish for a lesser fee, especially since we are in our 70's.

Description of Work
The electrician flipped a switch in the fuse box.

I was happy with the service. It required digging a trench from the well and putting in a breaker on my panel.

Description of Work
Ran electric connection from well to my house.

These guys are great. Our biggest problem is because the problem is intermittent, the power needs to be out when they are here so they can track down the source. Twice we had to cancel because it came back on. They explained that they could come out and test every single outlet when all power was on, but that would be very time consuming (aka expensive). I felt they had our best interest in mind at all time. They were *not* out to make as much money as they can. A less honest company would have said, sure, we'll rewire the whole house for 10 or 20 thousand. But these guys worked with us, and helped us problem solve less expensive alternatives which would be safe and serve our needs without sending us to the poorhouse. I posted before about how helpful they were in problem solving. When we called for them to come repair, we got an appointment quickly. The worker arrived on-time (a little early, actually, and he called first to see if it was OK for him to get there early). He was friendly, professional, and knowledgeable. He explained what was going on, and recommended a less expensive alternative. I will definitely use these guys again whenever I have anything electrical!

Description of Work
We have faulty wiring that intermittently goes out in various parts of the house. The owner came out to assess our situation and give us several options (the choice we had first made he advised us against because it would be too expensive: he said, sure, they'd let us pay them for a ridiculous amount of time, but there are less expensive alternatives.) They came out to do the work, but we had an unexpected emergency so had to turn them away. They were understanding and did not charge us for the time. We fully intend to use them. We had intermittent power outages in parts of the house. They installed a new outlet, installed a GFI, and fixed several outlets that had been "backwards" (pos/neg)

Great - they were prompt, thorough and cleaned up after themselves!

Welburn Electric Inc is currently rated 4.8 overall out of 5.

No, Welburn Electric Inc does not offer eco-friendly accreditations.

No, Welburn Electric Inc does not offer a senior discount.

No, Welburn Electric Inc does not offer warranties.