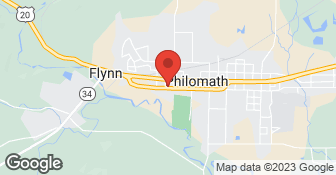 2 days prior to installation (which was also 3 days prior to moving into my house), Mainline called me to cancel the installation, citing that that could not get consistent help, and that they are overbooked. Ok, now what do I do? So I went to their shop and bought the system they were installing, and put it in. I intended for them to eventually follow up and re-pipe my well house which they were originally supposed to do. Water quality improved, but then I noticed that when I’m gone for a couple days water quality goes bad again (very orange). I called Mainline for help, and they can right out that afternoon (was very happy with them). They found nothing wrong with my instillation, they took samples, and now 4 weeks later I haven’t heard what needs to be done. I’ve followed up 4 times always hearing that ill get a call back, but nothing. Really nice people, but not the way to run a business. Very unhappy, now I have $1500 system that I don’t know is working properly, or more likely have another issue (like large rust deposits in my house).

Description of Work
I bought a new house that has a well with rust issues. Took a sample of water to mainline pump, they prescribed an iron removal system. They set up installation for 6/14/18.

Guy showed up, did not introduce himself, did not make eye contact. Did not complete the work on the day he was supposed to which was over one month ago. Office did not update on the progress. Pump was finally installed 4-5 weeks after original scheduled date to install. I would only use them again because they are the only ones available in the area.

The work was not completed on the date scheduled as the person you had install water lines did not glue all fittings. When the system was energized water was spaying from those lines. Unfortunately, this was not due to our error. The delay after was waiting for a message from you to let us know you had fixed the issue and we could move forward. This was also in our busy season and we are always booked out 30 days or more.
5.0

Control box died and was fixed immediately. Pressure tank was leaking. They were over within a day of calling and had a new tank installed the day after that. Professional, kind, polite. Answered all my questions. Had used them previously when I had a frozen pipe (fixed within 2 hours).

Description of Work
Assessed and replaced my water pressure tank and control box.

The work was performed in a timely and effective manner.

Description of Work
Six years ago, Mainline pump installed a 1,500 gallon water storage tank beside my pump because my well was not adequate to keep up with household use and irrigating my wife's numerous outdoor flowers and shrubs. So now my well pumps into the tank, and another pump in the tank pumps into my water distribution system (in the house and hose bibs). In August, 2012, while working on another project near my pump house, I noticed that the pump was turning on and off frequently, so I called Mainline again to see if there was a problem. When I called, they asked if I also wanted the tank flushed out. Since sediment had been settling in the tank for over six years, I said "Yes." The timing of their response was reasonable. They immediately identified the reason that the pump was cycling frequently was because much of the air had leaked out of my pressure tank. They filled the tank with air, and then proceeded to empty and clean out the water storage tank. That process took a couple of hours, but when they left, I was confident that the inside of the tank was clean.

They responded and diagnosed it quickly. They did the repair fast and the pricing was reasonable. They got done and every thing worked well. They did a really good job.

Description of Work
I had a plumbing point switch replaced for my well.

The main problem was that I wanted an outside faucet near the wellhead. Mainline Pump made an error in the design of the system so I ended up not being able to have a faucet near the wellhead. The reason - they told me one pipe between the wellhead and house would be adequate. They didn't realize until later that with the system they were installing 2 pipes would have been needed to provide this outside faucet. I also had trouble getting them scheduled and getting them to arrive when scheduled. The invoices have also been confusing. They're very nice folks, but seem a little disorganized at present.

Description of Work
I built a new home, including having a new well drilled. Mainline Pump conducted the water quality and flow tests on my well, put in the well pump, and installed a pressure tank in my house. The pipe from the well to house was installed by others (as part of the general excavation at the site).

The other company laid the water lines and did so prior to checking with us. As in any new construction site everyone has to maneuver around others on site working. When checking with other construction workers we had to re-schedule or work the job back in as possible. We were surprised as no concerns were ever brought to us.
5.0

I have a very old system, and have problems with iron bacteria. Shirley tested the water - all was fine but we still had rusty slime in our system We discussed a softener system, but in the end decided to just replace the other system components, which I had need to do anyway due to low water flow from the very old pump, and see if that solved the problem. The old tank had no bladder, so was contributing to the issue, along with a 5 year vacancy at the property, which gave the bacteria time to multiply. Service was performed quickly and professionally, and solved the issues I had. Mainline is a family business, and by the time you are done, Shirley makes sure you are one of the family. Their after hours line rings straight to their house, which Shirley picks up. I definitely recommend this business.

It was outstanding. It was an emergency repair, so they responded within two hours of our call on a Sunday and had it fixed in an hour. They were professional and friendly.

Description of Work
They came to our home and did a repair to our standing pipe.

Plumbing problems don’t usually solve themselves, that’s why you need an experienced plumber right now. With 11 fully stocked service vans your issues get solved quickly. Just give us a call and you’ll have a plumber at your door right away. Our services include the following plus much more.  …

We are the clear choice for your water system solutions. We are prompt, clean cut, professional, and most importantly feel that communication is key to our success and our customers satisfaction. We offer free estimates, free water testing, and 24 hour emergency service. We have some of the industries best available warranties. We accept most major credit cards. Additional phone - (503) 657-8000. Additional email - services@clearwaterpumpservices.com.  …

We are a small local company from Monmouth Oregon. We are a father and son owned drain cleaning company. We are devoted to delivering quality services and the customer's satisfaction with our work is our main concern. Together we have around 30 years of experience doing drain service work as well as plumbing.  …

MAINLINE PUMP & IRRIGATION is currently rated 4.3 overall out of 5.

No, MAINLINE PUMP & IRRIGATION does not offer eco-friendly accreditations.

No, MAINLINE PUMP & IRRIGATION does not offer a senior discount.