Down To Earth Irrigation LLC 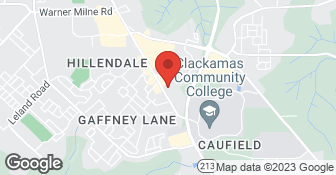 Down To Earth is family owned and operated right here in the Pacific Northwest and has served the Portland Metro are since 1972. We are a Certified Irrigation Design business as well as a RainBird Select Contractor. ...

Complicated project that required replacing an overhead system and working around existing plantings in several areas. Initial installation occurred in late Fall-winter so system required some follow up corrections once growing season was in swing. Overall quite satisfied after modifications were made and more information provided. The negative with drip systems is their complexity and need to change as plantings change; sadly this business is too busy to provide "maintenance" or support either directly or via referral.

spoke to owner on phone - said he would call me back - never did.

Owner did a good job replacing the broken sprinkler head - said he does not take credit cards and does not know how he got on Angieslist.. His company is very busy and it was difficult to reach him and find a time when he could come out.

Description of Work
The owner came out and replaced a broken sprinkler head that apparently a vehicle had driven over as it was close to our driveway.

Phil came out the same day that I called him. He gave me a bid that day. We agreed on the terms. He started work the following week. My system has 3 zones, but Phil installed a 6 zone control box, in case I wanted to add more zones in the future. He included several upgrades along the way with no additional charge. He seemed very knowledgable and professional. He also has an A+ rating with the BBB.

Description of Work
Fixed a problem I was having with my irrigation system.

We were very happy with them, they were excellent, and I would recommend them.

Description of Work
We used Down To Earth Sprinkler Systems to repair a non functioning circuit in our underground sprinkler system.

The company is also known as "down to earth irrigation". The owner is very courteous, knows his stuff and has been in the business for long time. He took time to help with the system and go over the details after it was put in. The price was very competitive and the quality of their work is great. The guys took effort not to damage existing landscaping as much as possible. They were ready to accommodate all our requests and knew the intricacies of the water engineering. The company was under a different owner couple years ago and was bought out by the current owner which could explain their old, not very good ratings.

Description of Work
A new 4 zone irrigation system was put in in a mid-size front and back yards with 2 drip zones and 2 sprinkler zones with a smart controller. They've used all Rainbird equipment with the exception of the sprinkler heads. The heads are from Hunter and have great reviews. The system was put in in 4 days.

They put in the sprinkler system. It was a very difficult lawn, so there were a few places where water wasn't covering. All I had to do was call and they would come out to add new sprinkler heads! Businesses like this are a relief!

Description of Work
Phil Severson did all the work on my sprinklers.

We are disappointed. We called four times to request repairs to a system installed by this company. They did not return any calls. We know that Summer is a busy season, but would have appreciated a call to at least tell us that they were too busy to help. Repairs were completed by another company.

Description of Work
We needed to find another company to do the work.

VERY SORRY FOR YOUR BAD EXPERIENCE BUT THIS HAPPENED BEFORE I TOOK OVER THE COMPANY SUMMER OF 2007
1.0

The original person I spoke to said that a design could be turned around in a couple of days. After dropping off my landscape plans, no phone calls were returned. After several attemps at contacting them (only answered phone once in 15 trys) I gave up. Now, I'm just trying to get my set of plans back. They act like they're going out of business. At this rate, they won't have to act much longer.

Description of Work
I asked for an irrigation system design.

VERY SORRY FOR YOUR BAD EXPERIENCE BUT THIS HAPPENED BEFORE I TOOK OVER SUMMER 2007.
5.0

They were great, prompt and thorough. I would recommend them highly.

Description of Work
They installed a lawn irrigation system for me.

Fantastic work! The crew was professional, cleaned up everyday and the overall installation time was fast. Great folks and great work! Their initial estimates where in the middle of the pack by they had come highly regarded from a neighbor and a coworker.

We called several companies in June for an estimate. Granted this is the busiest time of the year for sprinkler installers, but Down to Earth was able to provide a quote right away. The explanation of the work to be done was the best out of the other bids and the estimate was also the best. After signing the contract, we were put in the queue of jobs to be done, and it took a while (5-6 weeks) for them to finally start, but they did a good job when they started. Their follow up during this time period could have been better, so we would know when they planned to start. The installation was fairly straight forward. They did a great job of explaining how to use the system, and one week into having the system and our grass has looked better than it did at the end of spring. Overall, we were very happy with our experience using Down to Earth.

Description of Work
Installed sprinkler system for front (including area between sidewalk and street) and back lawn areas.

We called and waited almost 2 months for an appointment. Finally someone showed up and drew a map of our sprinkler system, saying they'd be in touch with us shortly. We kept calling until we were told that Gary had been on vacation and he'd assess our needs and call us back within days. He never did. We called again and were told it was a difficult job and that Gary was very busy with other jobs. They offered to send us the unhelpful map the fellow had drawn so we could ''go somewhere else.'' Meanwhile it had gotten so hot, our lawn is now damaged. My husband called Down to Earth and said he wanted a call back in the next few days or we would contact Angie's List and the Better Business Bureau. Evidentially, Mr. Shuler did not care, as we have never heard back from him. With this business method of operation, I am amazed this company is in business at all.

VERY SORRY FOR YOUR BAD EXPERIENCE BUT THIS HAPPENED BEFORE I TOOK OVER SUMMER 2007.
2.0

My overall experience with this co. is a negative. I hired them because they were ref. to me for a repair last year, and they completed it satisfactorily. I called them this year to activate the sprinkler system and do some repairs. I made an appointment and they showed up 2 hours late (without a telephone call to let me know of the delay). I was unable to be here for the turn on and repair. They turned on the system but did not perform the repairs as arranged. They came out 4 weeks later to complete the repairs, when I said I would not pay until they were completed. For the 2nd appt, they showed up 45 minutes late, and were not able to repair one item due to lack of experience with the type of sprinkler head that needed to be replaced. They did perform the other repairs that needed to be done at that time. I called them a 3rd time due to a break in a sprinkler pipe and needed to have it replaced immediately. They told me they did not have time to take care of the repair and could not help me.

VERY SORRY FOR YOUR BAD EXPERIENCE BUT THIS HAPPENED BEFORE I TOOK OVER THE COMPANY SUMMER 2007.
3.0

The plumber was late, but when I called they said he was at another job finishing up. Once he came, he was hard working. He began to dig up all the surrounding lawn/weeds/tree roots affecting the system. I have had to call them back because one zone was not working properly after he left. I will fill in another report after the final job is completed.

Description of Work
They fixed the broken sprinkler heads. They attempted to find a leak that was keeping back zone pressure down. They replaced zone knobs to turn on/off water to drain in winter and spring.

Description of Work
Down to Earth installed our sprinkler system last year and did a great job for us. When we needed to have our annual certification report done, they did not have a certified person on staff at the time but did refer us to someone who was certified who used to work for them, but went into business for themselves. This really helped us out.

Excellent customer service - my call was returned promptly and the work done within a week. The crew was prompt and worked diligently and neatly and finished faster than I had expected. I'd recommend this company highly for any work you need done.

Description of Work
Installed sump pump in basement and installed pipe to drain water outside.

THE PERSON THEY SENT OUT WAS PLEASANT. HE DIDN'T SHOW UP ON THE DAY I WAS TOLD HE WOULD COME. I CALLED THE COMPANY, AND HE CAME AND PERFORMED THE WORK THE NEXT BUSINESS DAY. I HAD ASKED FOR HIM TO CHECK FOR LEAKS, WHICH HE HAD NOT DONE. HE OFFERED TO DO SO, BUT I DIDN'T WANT HIM TO HAVE TO FILL THE PIPES WITH WATER AGAIN AFTER HE HAD ALREADY SHUT THE SYSTEM DOWN. PRICE IS FAVORABLE TO THE COMPANY I USED PREVIOUSLY, BUT THEY DON'T USE COMPRESSION TO GET ALL THE WATER OUT. SAID THEY'VE NEVER HAD A PROBLEM WITH FROZEN PIPES IN THE 30+ YEARS THEY'VE BEEN DOING THIS, AS IT DOESN'T GET THAT COLD IN PORTLAND.

THEIR RESPONSE WAS BOTH QUICK AND EFFICIENT. WE WERE ABLE TO GET OUR LAWN FINISHED IN VERY SHORT TIME. THE TECH'S AT DOWN TO EARTH REALLY KNOW THEIR STUFF WHEN IT COMES TO INSTALLING THE BEST SPRINKLER PATTERNS AS POSSIBLE.

All About Concrete & Masonry

Design it smarter, build it better, enjoy it longer, From design to installation, All About Concrete & Masonry can turn your vision into a reality. Pour a new path or driveway, lay a new paver patio or paths. We serve the entire Portland Oregon Metro area.  …

Frequently Asked Questions & Answers about Down To Earth Irrigation LLC

How is Down To Earth Irrigation LLC overall rated?

Down To Earth Irrigation LLC is currently rated 4.3 overall out of 5.

What payment options does Down To Earth Irrigation LLC provide

Does Down To Earth Irrigation LLC offer free estimates?

Does Down To Earth Irrigation LLC offer eco-friendly accreditations?

Does Down To Earth Irrigation LLC offer a senior discount?

No, Down To Earth Irrigation LLC does not offer a senior discount.

Are warranties offered by Down To Earth Irrigation LLC?

What services does Down To Earth Irrigation LLC offer?

Are there any services Down To Earth Irrigation LLC does not offer?