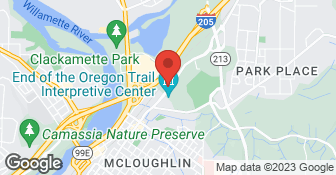 My family and I have done business with Clackamas Landscape Supply for years and have always been pleased, until today. Like many other times, a load of rock was being delivered to our house. We live on a main thoroughfare with a well-marked center lane in front of our house making it easy for delivery drivers to back into our driveway. My husband has backed countless trailers into our driveway and we’ve had numerous delivery drivers do the same, without incident. This morning however was a bit different. The Clackamas Landscape Supply driver, pulled into the center lane in front of our house and without checking his surroundings immediately began backing up across traffic into our driveway. Another driver was traveling down the road behind the Clackamas Landscape Supply truck and was forced to swerve around the large delivery truck when he began backing up. When the driver of the car went around the CLS driver it must've startled him because he began blowing the air horn on his delivery truck at the other driver. The CLS driver then turned to my husband who was standing on our front porch and began flipping him off angrily from inside the cab of the truck. The CLS driver quickly jumped out of his truck and yelled to my husband "you couldn't f**king back me in?" and continued to sling various other profanities at him. Several people witnessed the exchange and were just as shocked as we were at the CLS driver's behavior. My husband told the CLS driver to leave our property in no uncertain terms. With that the CLS driver jumped in his truck and took off. My husband then contacted CLS and spoke to the owner who was less than helpful. He said that he would talk to his driver and call my husband back. The owner called my husband back a few minutes later and said that his driver admitted as much with a slight variation to the story but with that being said offered NO apology and made excuses for his driver’s behavior. Again, not once did he apologize, offer to deliver the rock himself, offer a discount, etc. for the havoc and inconvenience his driver caused. It’s amazing to us how lax customer service has become. We are both business owners and would never (ever) conduct business like that. We would be tripping over ourselves to try and make it right. We were surprised at the owner’s lack of concern over his employees behavior and attitude and unwillingness to make the situation right. We have since taken our business to Canby Sand and Gravel whose prices were competitive even with the extended delivery.

Description of Work
NOTHING!

Price and quality was good but when I came back for my second load of gravel I had to wait for a car and trailer to leave and they closed their gate on the front of my truck before 4pm, their closing time and it delayed my project for an entire week. I used another company for the rest of my sand/gravel needs. I paid more at the other place, but was happy to do it at a place that appreciated my business.

Description of Work
I was needing to purchase 2yards of gravel and 1 yard of sand (6 truck loads) for my paver patio that I was constructing in my back yard.

I like their availability of products, that they are located nearby, that the cost is very reasonable, and that they deliver when they say they are going to. Their employees are knowledgeable about the products and they are friendly.

Asexplained above, I called, they quoted a price, they gave me a date and time (next day) and he came and did a wonderful job with such precision with such a large truck and load.

Description of Work
I went to the company and ordered cedar chips and asked if when the driver brought them out if he could/would put them on a large tarp. I also asked that when he came if he could walk an area with me and understand the problem that I would require rock/gravel. He came when advised, dumped an entire load of cedar chips on the tarp with not one chip on the graveled area. He then walked the area that was in question, advised that a certain type of rock (3 quarter minus) would so the needed job. I called the company to order a truck of this particular gravel and it was delivered about two hours later in the spot that I indicated. It was so nice to have a very professional driver (Bill) who was very willing to assist me in what I needed and put the two entire truck loads exactly where I wanted.

Description of Work
We always buy all of our materials there. They are very helpful and nice.

He brought out really good soil for me. It was just what they said it was. They were very prompt.

Description of Work
I ordered 2 different kinds of soil for garden from Clackamas Landscape Supply. He brought it out for me.

They were on time and the placed the topsoil, etc. where I liked it to be. Overall experience was great from office staff to the team the came out to the home.

Description of Work
They brought out 14 yds of topsoil to do landscaping with. I have also purchased topsoil and landscaping stones and woodchips from them.

I ordered the topsoil mix over the phone, paid with credit card and set up a time to have it delivered. The driver was on time and dumped the load right where I showed him. He took extra pains to try and not get any on our driveway gravel. He wasn't entirely successfully in his efforts but he gets an A for effort. I have used Clackamas Landscape several times and have found them to be very helpful on the phone, the drivers are always courteous and on time, and their products seem to be of good quality.

Great! I was very happy. The yard crew were professional and friendly, as were the guys who delivered the rock.

Description of Work
We went looking for a large rock to add to the landscaping in our yard. We found a large rock and they gave a visual estimate of $100.00. After weighing it, the rock was worth more, but they sold it to us for the price quoted. They delivered it to our house as well.

It was fine. They were on time and professional. They dumped it exactly where I wanted them to. The driver was very courteous. Their price was very competitive.

Description of Work
They came to my house and they delivered seven yards of cedar chips for me.

NEW TO HOMEOWNERSHIP AND LANDSCAPE WORK--NOT A PROBLEM AT CLACKAMAS LANDSCAPE. THEY ASK YOU ALL THE RIGHT QUESTIONS ABOUT YOUR PROJECT AND GET YOU JUST THE PRODUCTS YOU NEED. TOP SOIL AND MULCH HAVE BEEN EXCELLENT QUALITY. SUPER FAST SERVICE. GREAT ADVICE. FRIENDLY.

Description of Work
KNOWLEDGEABLE ADVICE AND RECOMMENDATIONS OF PRODUCTS NEEDED. PROMPT PURCHASE AND DELIVERY OF TOP SOIL AND MULCH FOR LANDSCAPE PROJECT.

Working Year Round serving the Greater Portland Metro area since 1977 in Landscape Design & Installation. We use only the finest materials & guarantee our work. Our crew will work with you to create the perfect Landscape for your location, size and budget. Customer satisfaction is our top priority. Our professional staff can handle just about any project. People truly enjoy working with David in creating their special garden spaces as David has an extensive plant knowledge.  …

B Rustic and Restoration

B Rustic and Restoration is a small business owned and operated in oregon by Brenda C. And is registered as small minority owned company. B Rustic and Restoration was founded in 2017 by a struggling single mother of a disabled son who had never picked up a power tool until August of 2017. After deciding to build her son a unique dresser that looked like a toolbox she soon learned how to mill wood, make homemade stains and paints and created a one of a kind company that turns discarded wood and metal into functional one of a kind eco friendly upscale furniture. B Rustic now employs 10 employees and you can find our product in 21 states and 4 countries  …

Clackamas Landscape Supply is currently rated 4.7 overall out of 5.

No, Clackamas Landscape Supply does not offer eco-friendly accreditations.