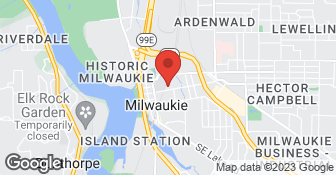 We’re a local small business with a big plan. Family owned and operated. We strive to exceed your expectations, from our initial contact and set up process to the quality of work we perform for the affordable prices we offer. Our guys, from our tree climbers to our grounds men, are seasoned, skilled and very professional. They get the job done right the first time around. We clean up after ourselves and leave you with a good feeling about doing business with us. All of our work is guaranteed. We’re also licensed and over insured

They completely butchered the side of a beautiful, healthy Doug fir. Our neighbors said they were pruning it but when we came home from work, every single limb was cut off all the way up to just the last 25% of the tree top. Our neighbors said they weren’t expecting them to cut that much either. I called Anderson and left a message, asking for some reassurance that what they did would not be damaging to the tree, and nobody called me back. I really wanted to give them a chance to explain why they cut so much, but they didn’t even care enough to call me back. Two other certified arborists have assessed it since and said it was grossly over-pruned, and much more likely to die in a few years. More susceptible to wind damage, and the existing limbs more likely to break now. I would not recommend them for this kind of work. I have never written a negative review for any other company or service until now. But I feel they do not have the knowledge and skill needed to prune a tree without causing severe risk to it’s health/causing it to die, or they do and they just don’t care.

It went great. Everything got well-trimmed and the tree branches were cut off so they were no longer laying on my roof. They chipped the branches from all the trimming and took it away with them. They cleaned up all the areas that they worked and it all looks great! Very nice people that came out, personable, knowledgeable, hard workers.

Description of Work
Trees and bushes, mature ones, all needed trimming. They had become quite overgrown and more than I could handle by myself. Tommy came out and I showed him my area's of concern, we talked, he made notes and then I got an estimate for what I wanted done in email.

Clean up was a little wanting, but they were there on time, and did do work.

Description of Work
One-time yard clean up, signed up for twice-monthly maintenance.

I called many arborists out for a bid to trim an 80 foot fir tree and a small cherry tree. Some companies never called back and some said they’d come out and never arrived. First impressions are critical with me and Anderson Landscape did not disappoint. Tommy arrived at our scheduled time and discussed my options in depth. His bid was very competitive. Email and phone calls from his office staff were courteous and returned promptly. The crew arrived on time the day of the trimming, worked swiftly, and made sure everything was trimmed to my satisfaction. All debris was cleaned and I am a very happy customer. I will definitely use this company in the future and recommend them to friends and neighbors.

Description of Work
We needed an 80 foot fir tree trimmed and a small cherry tree trimmed.

It went well, they were fast, efficient and were very professional. They were very good.

Description of Work
Trimming shrubs and hauled away debris from the trimming. They trimmed shrubs all around the house.

Description of Work
They did a great job. Tech helped me moved some furniture to make sure they got the whole carpet. I added a 4th room and some deodorizer. Very pleased! didn't take long at all to dry! Helped to have all the windows open and fans blowing of course!

They came out when I was away from the house and assessed the situation, then called and gave me a quote. We set up an appt and a week later they came out and did the work when I was out of town. I was very pleased with the work when I got home and was glad our phone communication worked. I did not need to be there to oversee to get the job done right! They did a great job!

Description of Work
Trimmed my laurel hedge and some other big bushes.

They showed up on time and worked fast. The hedge now looks like it was shaped by hand. They cleaned up every trace of debris.

Description of Work
Trimmed a dwarf laurel hedge to 5 feet and manicured the sides. It was about 80 feet of hedge.

Company apparently came out for estimate, but didn't contact me. When I called them after waiting around a few hours, I left voicemail asking for clarification and they didn't respond. Later I received an email from them with quote, only listing part of what I requested. Poor communication.

Description of Work
Company set appointment with me for an estimate on yard work needed.

Hi Member, For whatever reason I am just now seeing your comments on Angie's List. I apologize for our part in any kind of lack of communication in setting up your estimate. We have it in the system as a drive-by estimate.See below, this is what was in your appointment setting. Estimate-Drive by Go thru gate into back yard Side Yard and Back Yard -pull all walnut tree start that are in flower beds and growing up thru lilac next to the veggie garden. -Cut back blackberry vines/briars -weeding all beds including ones on the side yard -edging -spread customer already has Mulch in flower bed areas And this is what we estimated for. If and when you may need assistance with any kind of yard and/or tree work we will make sure to set up an appointment time to review projects prior to estimating them. Again, my apologies! We hope to earn your business in the future. Please feel free to give me a call or email me if you have any questions. Warm regards, Amy Bradley Anderson Landscape Maintenance (503) 659-3172 andersonlandscapemain@comcast.net
5.0

The Office Manager, Memorie, scheduled me for Friday that week and I asked if any cancellation occurred that I might be rescheduled earlier in the week. I was delighted to get the opportunity to reschedule earlier in the week - to Tuesday afternoon with completion on Wednesday. Doug and Tommy supervised the crews. They were very approachable, thorough and customer friendly. They made helpful suggestions which I appreciated. From my call to the Office Manager, Memorie, and the Estimate Visit by Doug to the final work I was very pleased by the attention to details by all the employees. I don't recall mentioning the Japanese Maple tree in the front yard to Doug. . . but the low hanging new growth was trimmed also, which added a finishing touch to the look of the front yard. This is one example of the professional attitude and care of the employees which I appreciated so much. I would hire this company again !

They are absolutely excellent, I can not say enough good things about them. They are really great at quoting pricing for jobs. They are extremely neat, polite, professional, and dependable!

They were fast and efficient. They got everything out really quick. They did a great job. I would definitely recommend them. The only issue we had was when they cleaned up all of the trash and everything around the yard, they put it all in the recycle bin.

Description of Work
They removed a gabbana.

They did an excellent job trimming a tree for me a year ago. They have done some solid yard work for me as well too.

Description of Work
They have done some landscaping work for me multiple times.

They came out and gave me a bid on trimming on four Douglas fir trees. They followed up with the work the next day. They did a great job. I did not even need to be there. They did the work correctly and cleaned up after themselves. I would highly recommend them and use them again.

Description of Work
They did some tree trimming for us.

The work was okay.

Description of Work
They did some clean up work and landscaping. They also planted some flowers.

Description of Work
They trimmed our hedges and they cleaned up a limb that had fallen off our tree.

Description of Work
They took out some trees, and did some clean up work for me. The work turned out fine and I thought they did a good job. They worked hard. I have used this company multiple times and I have always been happy with the results. I like them; they were fun to be around and it's been a good experience.

absolutely great. Office staff very helpful and friendly, the crew was on time, and worked non stop. On site supervision excellent. I would recommend this company to anyone wanting a job well done. Geri

Anderson Landscape Maintenance is currently rated 4.5 overall out of 5.

No, Anderson Landscape Maintenance does not offer eco-friendly accreditations.

No, Anderson Landscape Maintenance does not offer warranties.