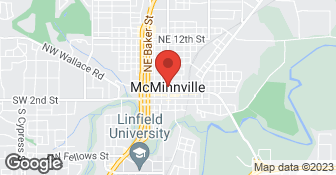 Cost is determined by job.

It was just so-so. He came in and I guess he did his best. It wasn't what I was expecting.I didn't realize until he had left and had the paint dried. I can still see where it is but it wasn't as bad as it was. I felt bad for him. It was out of his depth. Overall, he was very nice. He was late. Overall, he was a good person.

Description of Work
I have used Ask A Contractor. I had an uneven wall. In the past, my husband had taken out a window and try to fill it in. He used the wrong size of sheet rock. For years, we had it. I had them come in to make that even.

I called from "yellow pages" they came when they said they would and did the job with professionalism - -even making two trips............Case Plumbing is great !

Description of Work
fixed broken pipe and cked others

He did great work and I was pleased with the results. He does pretty much everything and I may hire him again in the future for handymen work. He was exactly on the dot as far as time was concerned.

Description of Work
He did drywall work me.

Walter Dotson is very professional while his personality is pleasing. He is patient. I was in jeans as we waited for an electrician to arrive. Walt was saying "we will get it done." He installed the AC when the electrician came.

Description of Work
Built a lovely gazebo in the summer of 09' $65 for the labor and supplies. Repaired a smoke alarm (hooked up a wire and put in a new battery.) bombed the home to control hobo spiders.

Owner operated with over 25 years of experience. High quality upscale work. Honest and dependable. Residential and light commercial work. Cost is determined by the job. No travel charges. Two locations in Oregon City and McMinville. CCB# 207112  …

How is Ask A Contractor overall rated?

Ask A Contractor is currently rated 4.8 overall out of 5.

What days are Ask A Contractor open?

Ask A Contractor is open:

What payment options does Ask A Contractor provide

Ask A Contractor accepts the following forms of payment: Check

No, Ask A Contractor does not offer eco-friendly accreditations.

Does Ask A Contractor offer a senior discount?

No, Ask A Contractor does not offer a senior discount.

Are warranties offered by Ask A Contractor?

What services does Ask A Contractor offer?