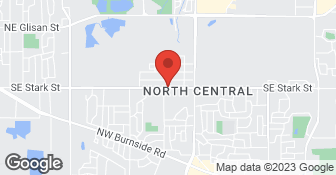 Gresham Appliance has been servicing the East County area for over 35 years. We offer genuine OEM parts for all major brands. service calls in a timely manner . We also offer Guaranteed Reconditioned Appliances ,with a 90 day warrenty...

Knapp's Service & Appliance Repair LLC is your best bet for quality appliance repairs in Portland. We offer appliance repair for fridges, dishwashers, washing machines, and more. We're licensed and insured for home appliance repair, and we have 14 years of experience in our industry. You can trust us for expert workmanship and professional customer service.  …

All Tech Appliance Service is a family owned, technician managed service company. Our goal is complete customer satisfaction and we will do our best to resolve your appliance issues to keep you as one of our customers. We have two full time technicians who are all paid employees of the company as we do not use contract or leased workers. We are licensed, bonded, and insured for your protection, and we offer discounts to Angie's List members. For quickest response time, please call 503-762-1427 or email service@alltechappliance.com  …

COVID-19 SAFE VIRTUAL SERVICE. Virtually diagnose and/or repair your appliances today without anyone stepping foot inside your home! For $35 you can take control of your home appliance repairs via video chat or text with a certified technician when it’s convenient for you. Just make an appointment and tell us what’s going on. Neli’s advanced camera sharing ability, user-friendly chat features, and certified technicians will guide you over the phone through your appliance diagnosis and repair. Schedule your appointment today at nelihome.com or call us at (833) 876 0900!  …

Super. Jason came, saw what was wrong, ordered the part and was back in two days to install it. Jason is super nice and very adept at his job. Will always hire Gresham appliance for repairs.

Gresham Appliance replaced the motor on our dishwasher about 6 months ago. About two weeks ago the dishwasher started acting up again. I called and made an appointment for them to come out. They gave me a time window of 10:00 am to 2:00 pm. On the morning of the appointment they called at about 9:15 am saying that they were running early, and asked if they could come at 9:30. I wasn’t home at the time, and requested that they come after 10:00. At about 1:30, I had still not heard from them, so I called. They said they would contact technician, and call me back to let me know when he would arrive. At 2:00, I had still not received a return call. I called again and they said the technician was tied up in another job and wouldn’t be able to make it at all on that day, but that they could come the following day. I had taken the day off work, and now I would need to take off another day. So, they had done a poor job originally because the dishwasher needed repair again after only 6 months. And, they did not show up at the time they said, and did not communicate with us to let us know they wouldn’t make it. I will not use their services again.

On 6/8/2017 we did come out and service your dishwasher. However, we did NOT replace a motor. What we did was clean debris from the motor. If you look at invoice #9812 you will see that is what was done. We are sorry that you feel that we did not do a good job for you. However, no parts were replaced so it is possible that more debris were in the dishwasher. As for the scheduling problem unfortunately we do sometimes run into calls that run very long. We did try to stay in touch with you. The office spoke to you and did say the tech was in a call that was running longer and they would call you as soon as he was finished. You did call back before he was finished and we rescheduled for the next day. When we called the next day you did not answer so we sent the technician. He left a card on the door. You than called and said that you were going with another company. Again, sometimes things time wise don't go well. We do try to communicate with our customer. Also, we are sorry that you feel that our company did something wrong because your dishwasher "broke" after 6 months. But, as we stated, no parts were replaced in the previous repair. It was debris that had been removed. Nothing mechanical involved. We are sorry you were unhappy with your experience with our company. We do try our very best to keep all our customers happy.
5.0

I called late in the afternoon and an appointment was offered for the next business day. Turned out the transmission in the machine stopped working and replacing it would've cost more than replacing it. I was able to buy a new-to-me machine from them, which was delivered and installed the next day. A few weeks after purchase the replacement machine had an issue, which was repaired at no cost to me. Very happy with the service I received, I'll be back next time I need appliance help or am in the market for a used appliance.

found problem quickly, fixed it and have had no problems since

Thank you very much for your review of our company. We are glad that you used our services and that you were happy with our company.
4.0

So, it was $79 for the house call. He just came, and he was very polite and kind.

Description of Work
They serviced my dishwasher.

Thank you very much for your review! We very much appreciate that you were happy with our service and that you would recommend us to others.
5.0

Called Gresham Appliance over the weekend after they had closed. They called me at 8 AM Monday morning and had someone at my house by noon. Service rep quickly identified the problem with my dryer and had it fixes within about 15 minutes. He also gave me a recommendation on how I could improve the airflow in my venting system and looked up a Dryer Booster Fan online and gave me all the information. He also fixed a leaky pipe in my stove area that had been a problem for a few years. He checked out my washer that was making strange noises. He told me not to worry about it at this time as it could still run for a few years. All in all I was very pleased!

Description of Work
Dryer was not heating

We appreciate your review of our company. We are glad that you were happy with our services and thank you for the recommend!!!
5.0

I called Gresham Appliance and they scheduled me for the very next day. They called ahead to let me know the repairman was on his way. Jason showed up on time and in under 45 minutes had done an excellent job of diagnosing the problems with my washing machine and my dishwasher, and fixing both! I will definitely call them the next time I have a problem with my appliances!

Description of Work
Repair of washing machine and dishwasher.

Thank you for your review of our company. We appreciate you calling our company and we are glad that you were satisfied and happy. Please do call us again if you need service on your appliances.
5.0

This provider was upfront with price of service call, and was able to set an appointment for next day. Serviceman was professional, detected the problem quickly and replaced defective fan quickly. Though I think all appliance repair is costly, I think the cost of repair was lower due to quick assessment of problem by serviceman. I would recommend this company.

Description of Work
Repaired my refrigerator

We appreciate your recommendation of our company and our services!! Thank you for calling our company and hopefully when you need help in the future you will call us again.
5.0

Description of Work
new switch in my refrigerator

They were prompt and able to fix my refrigerator. The provider was responsive and cleaned up after themselves. This is the second time I have used them. I would use them again and recommend to other members.

Description of Work
The water dispenser was broken on my refrigerator.