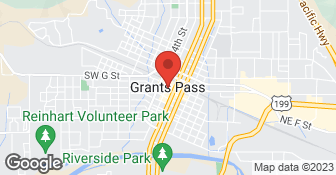 I am a Certified Arborist offering full service tree care....

They originally came out to give us an estimate. Later that week they came out to remove one tree for us so a project could move forward and then returned later in the week for the scheduled appointment to handle the rest of the projects which included: assessing tree health, identifing trees, pruning trees, removing a root growing under the walkway (and near the house), removing a tree, trimming trees, removing dead manzanitas and brush near driveway, creating burn piles and hauling away large pieces that couldn't be burned. They were professional and got everything done in about 4 hours. I had them give me an estimate for another project I'd like to do later this year before they left for the day so I plan on hiring them again.

They trimed two enormous Locust Trees and cabled them to prevent any limbs from breaking in the future. They also trimed and cut a few other trees that obviously needed some help. Had excellent equipment - large bucket truck, trailers to haul away old limbs. Cut limbs for firewood for me, and were very professional. It was a lot of work, and they did a great job. Very important: They cleaned up all the debris from the trees. Hardly tell anyone had been working in the area.

Description of Work
American Tree Service responded quickly to my phone call, came over to see the property and gave me a bid. Tom, the owner, is an Arborist, and knows the proper way to cut limbs and trees.