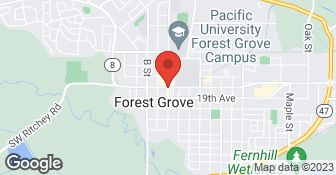 A family-owned, local company in business for 14 years specializing in residential and commercial remodels, including decking, fencing, painting, roofing, siding and windows....

A1 Paint Removal Painting and Restoration

Specializing in interior and exterior painting, paint removal services from many different materials/ surfaces, lead testing, and more! We guarantee your satisfaction and we won’t leave until the job is done right. We pride ourselves on the quality work we provide, while delivering great customer service! Paint removal from concrete, metal doors, chimney, window restoration, and MORE! Check out our services offered and call or click to schedule a free estimate today!  …

Professional House Painters is a family owned and operated full service painting company founded by Ramon Machain, bringing with him over fifteen years of experience and only the best reliable and trustworthy painters of the area. Our team members are professional and experienced painters trained in both technique and customer service. With countless happy clients, we are looking forward to providing you with the best painting job and make your home look its best. Furthermore, we always stand behind our work with a two year warranty! CCB NUMBER: 176310.  …

Call numerous times to get a quote and estimate going. They called once and said an estimator will get in touch with me and never did. I called back to find the status and never hear back. Clearly they don't want new business. I would never recommend them to any one. Will use someone else to perform the work.

The front man - the husband - showed up as pre-arranged, and we spent a nice hour discussing the job and chatting. He dropped a bunch of names of people he knew in town so we mentioned a name also. He claimed to know her. She later said she never heard of him. He left saying that the crew might show up later that day. If not, they'd be there by 1pm the next day. So, of course, we stayed home. No show. My husband called him, and he said they were running a little late and would be there by 3pm. No show. And, that was the last of him answering his phone or calling us back. When we called the office and spoke to the owner - the wife - she said he had received our messages and would get back to us soon. Summary: First he schmoozes us, then promises services, then no show and then no response. What was the problem? Who knows. Maybe they decided they didn't like us or maybe someone they know doesn't like us??? This is one of the problems with doing business in a small town with local small town people.

Description of Work
The provider agreed to do the job but didn't bother to show up or answer phone calls.

Description of Work
I used them, we did a roof with them.

It was done faily well. They were busy with other bigger projects but it was done before the winter set in. That was my goal.

Description of Work
Rebuilt the balcony and waterproofed it.

Turned out to require all new decking and some support beams. Only charged for the materials not the extra labor.

Mark is very considerate and will make sure the finished job is up to YOUR standards!

Description of Work
Replaced hardy plank siding (due to original contractor not installing to manufacturer specifications); treated some of the house walls (outside of sheet rock); repaired rotted porch post; installed new roof and painted house and trim.

I originally called CM out in Nov 2012 to fix my roof based on a friend's recommendation. Mark came out quickly, assessed the problem, and put in a temporary solution to stop a major leak in my garage. He wouldn't let me pay for the repair, asking me to only let him quote on replacing my roof in the Spring when the weather improved. I agreed. I called CM out again in Feb to quote a new roof. Mark took me into the attic to show me some issues, and quoted the job. The price was very competitive to 2 others I received (in the middle of 3 quotes - within $500 of each other). Then the issues started. Part of the payment was supposed to be my truck (his idea). He liked my truck, was used to having that make / model in his fleet, and knew I was selling it. He offered a very fair price, and was going to finance the balance through his company. We set a date for April to do the roof. As the time approached, delays starting to happen. He stated he was working on a large project, it had run over, and could I be a little more patient. I agreed. The delays continued, I had to keep calling to get any kind of update, and finally pinned down Mark to a date of June 18th. Since there had been previous no shows, I waited to make sure they showed up. To this day I have not heard back from CM. While Mark is a very friendly and engaging person, I am convinced they do not know how to run a business successfully. Promises Mark was making to me were discounted or disallowed by Cara. It was difficult to impossible to get a straight answer that both of them agreed to. I went out and got another quote from and quot;A New Image Exteriorsand quot;. Phil was very professional, showed up on time, did the work as promised, and was done by mid-July. I spoke to him of my previous issues, and he fast-tracked my project to get it completed before a scheduled vacation. A good ending to a nightmare with CM.

Description of Work
Initially Mark came out to repair a bad leak in our roof. He was quick and very friendly. But it went downhill from there.

They showed up on a Saturday with two crews. They tore off the old roof and went down to the rafters. Installed new plywood, felt and shingles. They repaired some dry-rot around the gutters at no extra cost. Touched up around the roof and gutters with paint and cleaned up all the mess. All of this was completed by Sunday afternoon. I am very happy with the work, and professionalism.

Went as they saided it would on time on budget

Description of Work
New roof and other maintain w