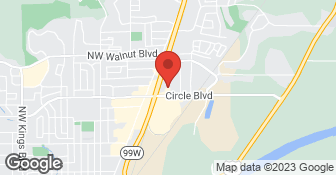 Benson's Interiors is your locally owned ABBEY CARPET AND FLOOR dealer. Abbey carpet and floor is over 700 stores strong! We have been helping our neighbors with their flooring and window coverings needs in homes and work places for over 60 years. We are proud to offer excellent products and services to meet our customers individual lifestyles....

Kristi was fantastic to work with to choose the product and color. She was very prompt and thorough on the site visit to measure and estimate. The installer was prompt and very efficient. He did a great job, did it quickly and cleaned up all debris leaving the house ready to move back in. I will definitely go back to Benson's for future needs.

not well installed incorrectly. found out I was way overcharged, and she would not refund, even after I showed her proof

Description of Work
Purchased vinyl flooring for the bathroom. Had the store install. |Pros: 1)Good choice of materials. | 2) People were friendly. | 3) Prices were competitive. |Cons: 1) Because of their commission system, you were required to work with the person who showed the original samples. That person, due to flexible scheduling, was not always in. Had to come back once or twice. | 2) While I was told the store had their own installers, it meant the installer was a subcontractor. He was good at his job, but I had assumed that he worked for Benson's exclusively.

It took them four attempts and eight different guys(employees) to complete the project. We started with getting a bid from Kristy at Bensons. We explained to her that we had a toilet leak and only one bathroom so we will have to schedule all of the work carefully because we were also living in the house at that time. She reassured us that things would be taken care of and run smoothly, that they knew general contractors if we ran into problems. The first two guys that showed up apparently were not qualified to replace all of floor damage from a toilet leak so we had to call in our own general contractor to do the work because Kristy could not find anyone as promised to work on it. Bensons then dropped us from the appointment list because they were short people. When they returned to resume work, a few days later, with different guys, father and son who did not speak English, they had the wrong size plywood and it was cut and installed wrong with some pretty good gaps around the toilet. I let it go and assumed they knew what they were doing. When we tried to communicate with these guys that the plumber was scheduled to install the toilet later that day and asked if the floor would be in by then, and if not, I would need to call the plumber to reschedule. He nodded and agreed with me. Later that day I checked in and found that they had put down the floor but the adhesive was not drying and sticking. They reassured me that it would dry by the next day so we went ahead and had the plumber install the toilet. The next day the floor edges curled up because the adhesive did not stick. We called Bensons and they said that they would take care of it but it would be a few days out to find someone to fix it. A few days later they sent out two more guys to rip out and reinstall of the floor. Mid day I went to check on how it was going and saw them with the new linoleum flooring spread out on my (not cheap) living room oriental area rug, cutting the floor to size with a box knife. All I heard all day while these guys were trying to install the second floor was cussing and talking to himself out loud about how difficult this project was for them and how incompetent the first installers were. After hearing more cussing than usual, I went to check on things again and found that this guy had accidently ripped a 6and quot; tear in the floor by the toilet and tub. He tried to talk me into cutting out a 12and quot; square in this area and put in a patch. My thinking was that I was paying for a new floor, not a patched new floor. The guy left that day, cussing all the way, and told me that someone would contact me. After speaking to a manager at this point they said that it would be a few days but they will send out another two guys to tear out and reinstall another floor. I at that point inquired about the cost. The manager reassured me that since it was their mistakes, there would not be any additional costs. These last two guys finally got it right, with no problems. When we received the bill a few days later they had added an extra $150. charge. I called and spoke to Kristy who told me that it was for extra materials and man hours . I called to speak again to the manager and she said that I did not have to pay for the extra they charged me and we were done. Never again will we think to call Bensons to do any work for us.

This bathroom project was a very poor example of Benson's Interiors normal work ethic! Our first priority is to meet the customers needs with quality and service. In this case, a customer with one bathroom, that has been torn apart, obviously needs flooring put in sooner than later. June is our busiest time of year, and the less experienced mechanics are the most available to schedule on demand. In hindsight, we wish we would have waited for one of our more experienced flooring installers to be available to do this work. However, we would not have been able to fulfill the urgent need to get the floor covered and the bathroom up and functioning. Experience level aside, we do expect more professionalism from our representatives than this review describes. Benson's Interiors prides itself on providing superior customer service, quality materials & workmanship to the Willamette Valley since 1946.
4.0

I would have given them an A; however, I was not told I needed to cover my things. The mess was everywhere and it took me 3 days to get everything clean. Everything else was great. I love my floors. And the service before the actual work was tops.

They were great. They had top-notch customer service. They were very kind, thorough and had good follow up. They were patient with any questions I had. They were really professional and friendly. They did a great job giving me all the different options including the price categories within my request. They offered me other options but didn't push them. They made it known that these services were available but didn't push them. I thought the prices were fair. Kristi McLean was my gal. She was super helpful, courteous, professional, and perfect amount of follow through. It took me awhile before I decided. They called when I left messages if I had to. It was kind of monthly check up but not more. She would call when I left a message. Then when I was ready to move forward, the quality of the blinds was great. One thing I liked was that she wasn't trying to up sale me. She was genuinely trying to help me meet my needs. I have 3 distinctly different spaces that I needed blinds in. She did what she was supposed to do, talk about needs, give you some options, different price points and let you decide. Any guidance I needed I felt was there.

I always go to Kristi when I am looking for flooring, shades, and shutters. She is someone who can really help me and I trust her. She was willing to travel three hours up in the mountains to assist me with a project. She is really smart and I highly recommend her services to others.

Description of Work
I last hired Kristi to complete the marmoleum flooring in our cabin. I am currently working with her for a carpeting project.

It took them three days total to complete the job.

Description of Work
This company came out and removed the old composite sub flooring and tiles. I had them install new plywood sub flooring and earth friendly marmoreal linoleum flooring. The area were they did the work was about 9 x 20 feet.

I install, repair, refinish to the the best of your liking. Leaving my customers satisfied is a main goal and I would love to be the one to help you.  …

We are a family run business and I am a 4th generation contractor, having recieved my first contractors liscense in 1978. We specialize in remodeling light commercial and residential buildings. Our skill set is framed in meeting the needs of our customers with a focus on troubleshooting problems and recommending specific solutions. We place emphasis on doing turnkey work and have the ability to provide design and build services. We self perform some carpentry related tasks, but bring in sub contractors to help get larger projects done more quickly. I always rely on licensed plumbers and electricians to do specialty work, while applying for building permits and having the proper inspections completed as occasion requires. Since communication is such a large part of success, we use smart phones to stay in constant contact with our customers as we work together. Payments with Visa is possible. Generally we require 50% payment upon acceptance and the balance upon completion.  …

We specialize in: Carpet & Area rugs, Vinyl & Linoleum, Laminate floors & Hardwood, Counter tops, Wall & Floor tile, Natural stone, Window coverings including draperies, blinds and shades. We offer repair & cleaning service of blinds & shades. Professional installation is available on all of the products we sell. If you prefer to do-it-yourself, we offer free advise.

Sorry, We do not offer repairs or installation of flooring products that have not been purchased at Benson's Interiors.

How is BENSON'S INTERIORS overall rated?

BENSON'S INTERIORS is currently rated 3.6 overall out of 5.

What days are BENSON'S INTERIORS open?

No, BENSON'S INTERIORS does not offer a senior discount.

Are warranties offered by BENSON'S INTERIORS?

What services does BENSON'S INTERIORS offer?

Are there any services BENSON'S INTERIORS does not offer?

Sorry, We do not offer repairs or installation of flooring products that have not been purchased at Benson's Interiors.