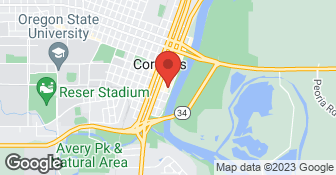 We love what we do! Beckon Call is window cleaning company. Services Beckon Call offer include: window washing, roof cleaning, moss removal, gutter cleaning, house washing and pressure washing. Jim Ordway started Beckon Call in 2009. As of start of 2020 Beckon Call has been in over 1,000 homes in the area! Most of our clients are professionals or retired professionals, that are either busy or want to avoid tasks that involve risk (ladders, walking on roof). We are comfortable working with a full house of people or by ourselves. Many customers give us access to perform the work while they are on vacation (nice to come home to work done!) or leave once we get started. Honestly, it's your home and we are comfortable with whatever you choose!...

Very well. They were scheduled for 1:00 PM, but called to see if they could come earlier. I was ready, so it was fine. Had 2 or 3 people on the job for about 3 hours. Very professional and courteous. Decks and railings look great

The provider came to my home to assess the job and give me a quote. I thought he was super nice and professional, so I hired him to do the work. My windows and tracks were very dirty, and his quote included the scope of the job I wanted done. Even said on the quote that he would clean the tracks. After he cleaned them, I was shocked to find several windows with very dirty tracks, and some windows with spots that had needed to be razored off b/c they didn't come off with wiping. When I asked him to come back and inspect the job and let him know that I wasn't satisfied, he argued with me about it. He told me that cleaning tracks and razoring spots off windows costs extra, and that they don't usually do that for people. Then he switched tactics and told me that my windows were so dirty to begin with, that I should be pleased that they were cleaner now. I held my ground on this, and to his credit he then went back and redid the whole job, and did a nice job. I am very upset that I was put in the position of having to argue with him to get what I had signed up to get in the first place. Very awkward!!!

Description of Work
Washed all windows in my 2 story home.

Well it is always tough to have a negative review. I could have handled this situation better. All of the issues were resolved, and the conversation regarding the issues only lasted a few minutes, I just wish I had handled the conversation better and just got to doing what I was going to do anyway...which was fix the issues. I did leave thinking the issues had been satisfactorily resolved, I addressed all concerns and even helped reposition their Grand Piano (no charge). They thanked me for returning and taking care of the issues. (Work was performed on June 9th & 16th, 2014).
5.0

We have a three-story house built on a woodland slope. Our eaves are sometimes home to birds, squirrels, and bats, all of which leave deposits on high windows to remind us that we're in their territory. Beckon Call is well-equiped to handle extreme heights without a ladder, which saved us angst about safety. The work was thorough and impeccable. The before and after difference in the brightness of our house was surprising! Previous window washers have taken two days and left streaks and scratches?not the case here. It's amazing what Beckon Call can accomplish in a day. Jim was accommodating, good natured, environmentally conscientious , and hard working. I will definitely continue as a customer, and highly recommend Beckon Call's window washing.

[removed member name] - Thank you for the detailed review! Our pure water-fed pole for exterior cleaning has really increased cleanliness and reduced risk, it's nice to hear that you appreciate the safer processes and the results. I'm looking forward to cleaning all those again! –Jim
4.0

Thank you John for the great review! It was a pleasure working at your home. – Jim
5.0

Jim and his crew arrived the next week and cleaned all of our windows inside and out in just an hour and a half! He even was able to clean one window that was covered two years ago with a sticky garden spray. They were prompt, polite, and barely noticeable as they worked throughout the house. It was a pleasure having them here and at no time did I feel that they were inefficient, or untrustworthy in our home. Jim charged exactly what he had bid, which we considered to be very reasonable. It's wonderful to look out any of our crystal clear windows now and not see the streaks that we would invariably leave when we cleaned them ourselves. We won't hesitate to have Beckon Call clean our windows again next spring. In fact, I'm already relieved at not having to dread this project which used to take us a half day to do ourselves.

Description of Work
We live out on the edge of the forest and our home has large windows on the west and south sides. It's beautiful to look out at the trees and our garden ... unless the windows are dirty from rain storms, pollen, dogs, birds, etc. We've always cleaned them ourselves in the fall and spring, but it's becoming more difficult for us to do and we were beginning to squint through the windows last month when the sun would finally shine through. Then I learned of Jim's services with Beckon Call and asked him to give us a bid. He walked through the rooms in our house and told us exactly what it would cost to clean all of the windows.

He gave me an estimate and measured the windows. Then came out to conduct the work. He did a great job. I would definitely use him again in the future.

Description of Work
I used Beckon Call for cleaned the inside and outside windows. He cleaned a total of 22 windows.

GOOD VIEW GUTTER & WINDOW CLEANING LLC Depends upon repeat business and positive word of mouth referrals. As a result our focus is on establishing a long term relationship with our customers based on demonstrated value, trust, and mutual respect. Our signature service is always our priority to make sure you are 100% satisfied. Call us for a free estimate.  …

Referred Roof Cleaning is a full service roof and exterior cleaning company that has served over 2000 residential and commercial clients since 2011. We have a proprietary online bidding system that allows us to perform accurate bids of most projects remotely, saving our customers time a money. We offer a special 10% off discount to all online bids and guarantee you will receive your bid within 24 hours of your inquiry. We also offer in person estimates if that is your preference. Our company motto is "High Quality, Fair Price, Happy Customers". We follow the Platinum rule which is; "Treat others the way they want to be treated".  …

How is Beckon Call overall rated?

Beckon Call is currently rated 4.6 overall out of 5.

What days are Beckon Call open?

No, Beckon Call does not offer a senior discount.

Are warranties offered by Beckon Call?

What services does Beckon Call offer?