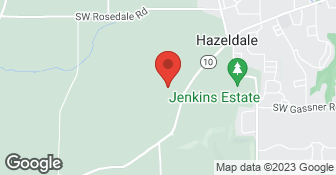 When you need a professional excavator, you can count on the highly experienced contractors at The Excavators, LLC. For many years, we have been offering customers all throughout the Portland Metro area the best in excavating services. As a third generation family owned and operated company, we place a large emphasis on customer satisfaction. We also do sewer repair. There are so many options today for sewer repair in Portland. With trenchless repairs, traditional, and others, going through the options can be overwhelming. So which one is best for you? The Excavators, LLC can help!...

My wife and I are Sellers in a real property transaction on the West Slope. Eric LaRue provided prompt, informed advice about sewer line inspections. The buyers' real estate agent obtained a scope and then prepared a report claiming $4500 was required to dig out and replace part of the sewer line. We sent the video scope to Eric for independent evaluation. First he analyzed their film to determine that a tree root which caused a 'failed inspection' did not clog the pipe. Next he evaluated the lay of our private line with the City's main segment, and explained a method for entering the City main to take a better look at the roots' location. Eric counseled us on how best to approach the City Public Works department to get them involved. A rigorous inspection by the City showed the tree root was in their pipe, not the homeowner segment. Further, the root was diminished in size compared to claims made by Buyers' agent, and posed no obstruction. Eric's calm, fact-finding approach helped us fend off a faulty inspection report. His knowledge of sewer scopes, pipe materials, and how older lines are conjoined is superb. Not every job will result in such a quick or favorable outcome. But I trust Eric LaRue to figure out what's needed to solve sewer problems -- whether "the issue" is above or below ground.

It's your worst nightmare, right? Having the pipe replaced from your home to the city line? Never fear, the Excavators are here. Eric's company delivered supreme customer service; on time with all of the equipment and staff, job done efficiently, cleanup done perfectly and NO EXCUSES, NO DELAYS. He communicated with me throughout the process, addressing all of my questions. They even identified a problem with the City of Portland water line and called them in to take care of it pronto. I'm not sure I can say replacing a sewer pipe is a pleasant experience, but it certainly was painless.

Shortly after our home sewage-disposal system failed, we requested bids from several contractors to fix the problem. We chose The Excavators because of the company's excellent reputation, as indicated by former clients. Our house, situated on a low hillside, was serviced by a 60-foot-long, outdated "Orangeburg" sewer pipeline that was installed in 1962 when the house was built. This pipe joined a larger pipe that extended for several more feet under the sidewalk in front of our house, eventually connecting to Clean Water Services' main line located in the street. Initial camera footage of our 60-foot-long pipe indicated that it was highly deteriorated in several places, including places where it had been compressed to a point where it was nearly blocked. At least one place along the pipe appeared to be breached. Camera footage also revealed that the larger pipe was blocked with various sorts of debris, including root fragments, pieces of concrete, soil and solid household wastes. The work performed by the contractor was outstanding. As promised, the contractor completed nearly all of the work within five days. An additional day or two was spent cleaning up the site and restoring relatively small areas of our yard that had been damaged by equipment, all of which was unavoidable. Replacement of new pipe was accomplished using a technique that didn't require trenching. The sidewalk, which had to be removed to gain access to the larger pipe, was replaced. Subsequent inspections by Washington County and Clean Water Services approved all of the finished work. Throughout the project, the contractor kept us well-informed about scheduling and work progress. We are extremely pleased with the completed work and would certainly hire The Excavators should we ever require the company's expertise.

Description of Work
Replace sewage-disposal pipeline from our house to main sewage collection facility in the street.

Description of Work
excavating of back yard.

Great. Priced as agreed and punctual.

Eric was able to determine that a very costly sewage pipe block extended farther than was originally identified, he was able to get City workers to come out within an hour, discuss how the problem might have come about, and in the end the City will be fixing the problem the next business day. We were so relieved by Eric's being readily available to help us and his expertise in solving the problem.

The Excavators LLC came in after another plumbing company unsuccessfully tried to fix the problem. They were able to determine what the problem was and it was really significant. The problem was really complicated but they told us what was needed and were super helpful and supportive every step of the way. We had to have the street closed off, involvement with the City, major digging - and it got done with minimal hassle. They were outstanding and we are forever grateful.

Description of Work
I am a Real Estate Broker Licensed in Oregon. Eric Laru has provided work on underground sewer lines on several occasions. Eric provides detailed estimates for worse case scenario so the client has no surprises. Final Invoice usually comes in below the Estimate. He is knowledgeable, communicates well with all parties, dependable and leaves the site in good condition. Eric is very nice and wonderful to work with. Mary Temple Meadows Group Inc., Realtors

How often can you say "wonderful " his team even saved our underground sprinkler systems!

Description of Work
We are in the process of a whole house renovation on a 90 yr. old Portland residence. The sewer hadn't failed yet but was in need of help. Eric was referred to us by American Plumbing who we had used on our rental property. After scooping Eric said we're good candidates for sewer relining because we have cement sections. Eric was ALWAYS so professional but at the same time easy to talk with and fun to be around. Hard to believe when you think of shelling out multiple thousand $ that you hadn't planned on. Job from start to finish amazingly neat and even had a broken rain drain replaced.

How is The Excavators LLC overall rated?

The Excavators LLC is currently rated 4.9 overall out of 5.

What days are The Excavators LLC open?

The Excavators LLC is open:

What payment options does The Excavators LLC provide

Are warranties offered by The Excavators LLC?

What services does The Excavators LLC offer?