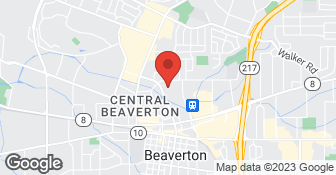 Since 1976, Chelsea Audio Video has designed, installed and maintained custom audio video systems with personalized services customers cannot find anywhere else. As technologies have changed, Chelsea's core philosophy has remained the same - provide people seeking custom audio video solutions with quality, experience and commitment. We began as a specialty Hi-Fi audio store in Lake Oswego founded by Ford Montgomery Jr. who is still the owner and still available in the store five days-a-week....

Description of Work
Audio Visual services. They are professional and prompt. They are our go-to company for our audio and visual needs. I have used them for many years of service.

The job went great. Customer service was amazing all the way through Starting with our sales guy Keith, a great walk around by Scott and incredible installer Ryan. Great job by the entire team. We have a bonus room to do next and I will for sure be calling these guys again.

My most-recent purchase was a subwoofer. It's ideal to test subs at home since their performance depends a great deal on placement, room dimensions, and more. They encouraged me to take home a couple of expensive subs -- admittedly, I've been their customer for a long time and we know each other well -- so I could check them out. The subs performed exactly as they'd predicted and I made my purchase. No drama, no pressure, no rush, extraordinarily helpful. These guys have integrity. I inquired recently about some other equipment and they talked me out of buying it. They'd have sold it to me if I'd insisted but they know my system and the state of the art. They were exactly right. As long as I have eyes and ears I'll buy at Chelsea.

Description of Work
I have been an audio and home-theater nut for more than 45 years. (Home theater nut since there has been such a thing as home theater.) Since I got to know Chelsea Audio Video 20+ years ago, I've bought all my equipment from them. I buy high-end, not lunatic fringe. They are highly knowledgeable, patient, friendly, professional, and extremely helpful, and they sell great equipment at all price points. Their shop is set up for good demos, as opposed to mass-marketers where you cannot possibly get a fair audition. They've set up A/B tests of power amps for me (not a trivial matter), for example.

After auditioning several amplifiers, I decided on a $3000 tube model. When I made the order on May 17, I was told that an outboard phono amp would be necessary to be able to operate a turntable with that machine (which I advised was my primary concern in buying that amp). I was further told that a new model outboard amp was in QC (quality control) and would be available to plug into my machine and quot;soonand quot;. In the interim, I was provided, at no cost, another outboard phono amp to use while awaiting the companion model. Now, over 6 weeks later, I am still waiting for that amp. I have since been told that the outboard model is, in fact, a board that could be plugged into the amp, only to have that later modified into a board that has to be soldered into the amp by a qualified technician. I don't know if my sales person at Chelsea is woefully uninformed, is making this stuff up, or was misrepresented to by the amp manufacturer, but the story keeps changing. In any case, I've heard three different stories since I bought the amp on the premise that an outboard phono amp was available. I feel ilke I stepped into a tarpit. This just keeps getting weirder and weirder.

Description of Work
I ordered an integrated amp and speaker cables from Chelsea.

They were helpful on the phone (a guy named Ford, in particular) to the point that I feel guilty...beyond the call of duty kind of stuff. I bought the equipment about a year ago. I'd hunted around for an Anthem MRX 500 AV receiver, in Portland, and while I can't remember the details now (all prices were the same everywhere), I remember feeling that the person on the phone who answered my inquiries seemed friendly and professional and didn't mind all my questions. They also were able to have it all ready for me quickly, as I wanted to get it in a hurry after weeks of research and being without music. So I was willing to drive out to Beaverton to deal with them. They were closing and had it all ready at the last minute. It's a great receiver, though I had to get a separate phono pre-amp for playing records. It was worth it because the music quality is above most AV receivers by quite a bit. I also got some very nice Bower and Wilkins ceiling speakers for my kitchen as well, which they sold me on after hearing them in their store - no regrets there. Anyway I called today - a whole year later - cause I finally got my act together and was wanting to get the turntable going and we didn't know how to do it. Ford worked with my husband and me on the phone for a long time and with great patience, before realizing it was something simple my husband was doing wrong. Around the time we bought the speakers, we had a speaker defect. It was very rare (reviews show that these speakers rarely have problems) but Chelsea Audio was very good about allowing me to return them. They quickly tested them to help me determine what the problem was (at first we weren't sure why there was a muffled sound), then agreed there was indeed a problem and gave me the new set with no hassles whatsoever - just an apology for the inconvenience. They're very knowledgeable about their equipment, and are very friendly, helpful, professional (and not at all condescending considering how high-end some of their equipment is, which was very refreshing) and fair. Highly recommend. Next thing I'll be doing is paying them to come out and set up one of those universal remotes that do everything but make you dinner. I gave them a and quot;Band quot; for price just because this is pretty expensive stuff and to imply it's a great price is probably misleading. However these items cost the same everywhere.

Description of Work
I mainly only bought my audio equipment from this store - as opposed to having them actually come over to our house and install it - (which I regret by the way: I'd booked with another installer that a friend recommended before I bought the equipment, and they were terrible) - however I've needed help on a few occasions and the guys at Chelsea are so incredibly helpful over the phone.

Excellent work. Kyle and his colleagues were very prompt, professional, knowledgable and friendly. Wouldn't hesitate to use them again!

I spent $200 on that work. They were excellent, experienced, knowledgeable, have a high degree of expertise, responsive and accurate.

Description of Work
I used Chelsea Audio Video 10 days ago for the sales and installation of a television.

They are a good company.

Description of Work
We have been dealing with them with setting up our stereo system.

Very nice, very professional. I was not too thrilled about having to drive from Vancouver to Beaverton to meet with them - time and gas. Their competition (not BestBuy) was willing to come out to my home to see our setup and provide estimates. However, I must admit it was nice to be able to see/hear some of the options. Their costs compared very closely with their competitors. Although I wonder if they could have really done the labor as cheaply as they estimated, without seeing our home. I did end up doing all the work myself to find and purchase all the components seperately through various companies (with free shipping and no tax). We found another licensed and insured individual to perform the installation. Had I not had the time and willingness to endure the frustration of doing all the upfront work myself and someone else to do the labor, I would have gone with Chelsea.

Description of Work
I was looking for a new home entertainment center (flat screen tv, surround sound, blu-ray). The discussed all my requirements and then developed two estimates (Best, Good) which included all components and estimated labor. They provided some diagrams of how it would look.

We are an award winning service company. We've been in business since 1994 and over 90% of our business is repeat & referral. We care about our customers and work hard to earn your business every time.  …

When it comes to Portland electrical contractors, accept only the best. Falcon Electric puts a premium on providing consistent quality and true customer service. We offer a wide range of professional residential and commercial electrical services for our valued clients. Our extensive experience, consistent quality, unmatched customer service and local focus make us a leader as a local Portland electrical contractor. We have built our reputation by treating our customers like family. That’s our difference. If you’re looking for timely and reliable residential and commercial electrical service from a contractor who really cares and takes pride in their work, with Falcon Electric, that’s precisely what you’ll get.  …

CHELSEA AUDIO VIDEO is currently rated 4.7 overall out of 5.

No, CHELSEA AUDIO VIDEO does not offer eco-friendly accreditations.

No, CHELSEA AUDIO VIDEO does not offer a senior discount.