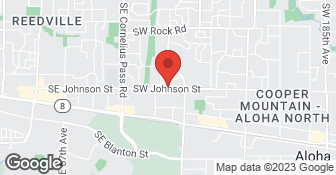 More than 17 years of construction experience remodeling and repairing homes around the Portland/Hillsboro area. Specialties range from full additions and remodels to small repairs. We focus strictly on quality, cleanliness, safety, respect, dependability and especially communication. We are very friendly and easy to work with. Look forward to meeting with you to talk shop about your project....

Tyson (Alpha Construction) was truly impressive. He was on-time, beginning to end. He kept me appraised of everything as he went and showed me what the problems were causing the leaks and why there was a failure originally. He gave me several choices in the repairs (good, better, best). He updated his estimate as he went along. His work was excellent (better than the original builder) and his attention to detail was great. His drywall work blended in perfectly with the original walls. I will use him in the future, have in fact scheduled more work with him. On top of everything he was GREAT with my dogs, all 4!

Description of Work
Tyson did a fantastic job and he was very sweet and patient. My finances didn’t work out the way I thought they were and Tyson worked with me to bring the project scope into an affordable range. He went Way out of his way to get my projects finished and we were very impressed with the finished product. Did I mention how patient he was?

Alpha construction and Tyson acted like they cared about me and mine, not just the job. He bid the original job, kept coming back even though the scope changed and stuck by me till the end. A successful and happy conclusion. He found me subcontractors for the individual projects, did the work as needed himself AND even made use of my interest to help. He even kept his prices as reasonable as possible. I would both call him for a future project and would recommend him to any one!

Tyson communicated with me frequently on scheduling and planning. Explained what he was doing and why. Always here when he said he would be and kept me informed about other held he was involving in the project. Always careful when inside to cover shoes and job sites were cleaned up after work was completed. Would absolutely hire him again and actually already have plans to do just that.

Amazing work done at fair prices and with creative ways to make quality fixes without uneccessary expense. I appreciate his attention to detail and double-checking work until customer is satisfied. He has a good network of subs he can bring in to do work as well.

The project went great, better than I expected. The estimated time was two days (to allow for any unforeseen problems), but it actually took less than a day.

Description of Work
We needed the old carpet removed from a bedroom and wanted wood laminate flooring installed.

Lowest bid. Professionally done. Matched the rest of the fence. My neighbor was very pleased. I am a single lady and appreciate finding someone I can trust.

Description of Work
Tyson fixed a toilet and a bathroom sink drain. He did good work and finished quickly. He's done work for me before at my previous house and I was also very pleased with it.

Both the fencing and pergola were finished on time and on budget. The projects were finished when promised...something that other contractors have not done. They did an excellent job. Both projects look beautiful and are exactly what I wanted. Something that really gave me a good impression was how happy the workers were. They obviously like working for Tyson. Another positive is the way they all treated me...an older woman. They were respectful and very helpful. Tyson and I adjusted the schedule so that I had time to prime all the lumber for the pergola before construction. He was very supportive of my desire to do the painting. They cleaned up nicely before they left. In fact, my garden looked neater and tidier than ever.

Description of Work
He built 60 feet of "good neighbor" cedar fencing. He built a a 10' by 14' pergola in my garden using my design but giving me very valuable input and advice on the project.

Tyson worked with us to make sure that we could afford the remodel that we wanted. To save money, we did part of the demolition and also worked with the county to get the building permit. He also squeezed us into his schedule so that work could be finished before a family wedding. The permitting process was more complicated than expected, as additional support was required in the floor and wall below; Tyson and his crew made sure that everything was constructed according to code and passed inspection. I especially appreciated that John was able to install additional wall support on the spot when the inspector required it, so we could move on with the project without a second inspection appointment. The project itself took just a few days, and the crew showed up on time and cleaned up after themselves when they left. I thought the price charged was very reasonable, and I would hire Alpha Construction again in a heartbeat.

We had a restoration project where a tree fell on a porch. The tree was so bit it blew out the 4' high foundation holding up the porch. After trying to get other companies to give us an estimate and make the repair for 3 weeks I found Alpha Construction (Tyson) and gave him a call. He came right out and even though he had a busy schedule he got his men on it right away. The customer loved the work and we continue to use them. Would highly recommend them.

Tyson and his partner did a stellar job on our project. We will be having other work done later this year and they will be the first call. This job ran a day or two past the time that Tyson said it owuld take but there was really nothing that could have been done to change that. A great company to work with.

Description of Work
Alpha Construction replaced the counter tops in our kitchen, including removal of an old stove top and replacement with a new one that I had bought. They also installed the new tile back splash.

Description of Work
I used the services of Alpha Construction & Repair. They did the siding and roof repair.

Tyson is very detail oriented. We have used him for other jobs in the past such as tile work in the bathroom and he built a gorgeous Pergola in our back yard. We'll definitely be hiring him to do some other projects in the future. His work ethics are excellent, he shows up on time, does grade A work and his rates are reasonable.

Description of Work
Repaired backsplash in kitchen. We recently had granite counters installed in the kitchen. When the old counter tops were removed (by another contractor) some of the glass tiles in the backsplash were damaged. There were also uneven gaps between the glass backsplash and the counter. Tyson retiled the bottom two or three rows of tile and made everything even. He also repaired the wall that was dinged when the old counter top was removed.

Alpha does great work at reasonable prices. I am extremely fussy about everything I have done in my house and they have performed to my high standards. I would use them again and recommend them to everyone if you want a great job done for a good price. Very trustworthy and professional.

Tyson is very professional and prompt. His estimates are fair and reasonable and he sticks to the prices quoted. Everything he has done for us has been completed in an excellent manner. I am very picky and always tell anyone doing work for me right up front so they know what to expect. I watch over everything and tell them along the way if it's not going the way I want it to go. I've never had any problems with Tyson and the prices are fair/reasonable. The work is always completed on time. I give him an A PLUS score; he does excellent work.

PETRA HOME SERVICES SPECIALIZES IN RESIDENTIAL AND COMMERCIAL EXTERIOR & INTERIOR PAINTING, PRESSURE WASHING, ROOFING, SIDING, ROOFING & GUTTER CLEANING, & CHRISTMAS LIGHTS We are a general contractor in the Clark County area. We take pride in our work, guaranteeing a professional and clean job with 100% satisfaction. Our priority is to give good prices and keep our customer happy. We provide a photo progress of your project to show you that the job is done the right way.  …

Alpha Construction & Repair is currently rated 4.8 overall out of 5.

No, Alpha Construction & Repair does not offer a senior discount.

No, Alpha Construction & Repair does not offer warranties.

Are there any services Alpha Construction & Repair does not offer?