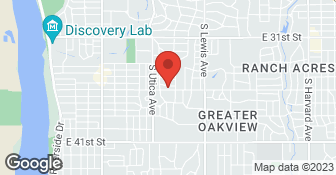 We specialize in concrete services, repairs, pouring, leveling, driveways, walkways, patios, and more! We guarantee your satisfaction, and we won’t leave until the job is done right. We pride ourselves on the quality work we provide, while delivering great customer service! Check out all the services we offer below and call -or- click to schedule a free estimate today!  …

Axis Renovations LLC, is a full service Remodeling/ Renovation Company. We can construct, or repair all of your home or commercial property needs. We offer a full line of maintenance, repair, or new construction services. We have the knowledge and Integrity that you and your property deserve.  …

Every aspect of my experience was superior. I asked for an estimate and was given one the following day. After I committed to the job, Rafael and his assistant showed up the next day to lay out the walkway according to my specifications (it was to be at least three-feet wide, flare out a bit near the street and wind its way through a pair of maple trees to the front door. When the forms were in place, I looked at the proposed layout, I felt it needed some adjustments. Rafael worked with me to make the adjustments I wanted and did not charge me extra for moving the forms. The next day the concrete was poured and the walkway turned out exactly as I had hoped. I frequently get compliments on it from my guests and could not be happier. Rafael was a pleasure to work with at every step of the project.

Description of Work
Rafael laid out and poured a concrete walkway from the street to my front door.

The project went extremely well. They were prompt, courteous and very willing to work with me to get the design and layout of the walkway just the way I wanted it. I recommend them without reservation and would never use a different company for concrete work.

Description of Work
Raphael G. Valenzela Conreted poured a walk-way from my front door to the street.