Handyman Services
Glass and Mirrors
Drywall
Exterior Painting
Licensing
Insured
All statements concerning insurance, licenses, and bonds are informational only, and are self-reported. Since insurance, licenses and bonds can expire and can be cancelled, homeowners should always check such information for themselves. To find more licensing information for your state, visit our Find Licensing Requirements page.
Business Details 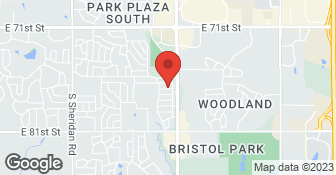 I offer free estimates in the Tulsa area. Your investment with Classic Image Renovations will bring a great return since you will receive a wonderful new bathroom, kitchen, or living space and you will be enhancing the value of your home. I take great pride and care in my work so you will receive a beautiful, well done project. I will be performing the majority of the work in your home and I can provide names of numerous homeowners who have trusted me in their homes. I work almost entirely for one client at a time. Many contractors do little of the work themselves and instead send out subs to perform the work so the homeowner is left with strangers working in their home instead of the person they thought would be working in their home. I have a Degree in Fine Art from the University of Tulsa and have been renovating homes since 2003. I am also very adept at helping a homeowner with design ideas and colors. Be sure to look at our profile pictures here on Angie's List of look at our website at bathroomremodelingtulsa.org. Feel free to call me with any questions. Scott Nichols...

VALU Handyman hires General Contractors that offer everything from home maintenance, repair work, quality whole house remodeling to innovative kitchen and bathroom renovations to space increasing room additions to ground up commercial construction. There is no job to big or small.

My team is comprised of skilled handymen. I provide all of our own tools and aim for your satisfaction. If it is a project that is out of our realm, I will be up front about it. We will NOT do work that a plumber or electrician should be completing. Our specialties include carpentry, doors/windows repair, TV mounting, fence/drywall repair, framing, trim, etc. Please refer to photos of my work. Choose HDHM and you’re choosing quality! - Austin

This privately owned business was started in the mist of the Covid-19 pandemic and takes every precaution to insure the safety of it's costumers and it's staff. I have worked in the construction field for 20yrs. I'm dedicated to craftsmanship and costumer satisfaction. I stand by my work! We specialize in anything from shoveling your driveway to installing; ceiling fans, light fixtures, changing door locks, hanging tvs and more. How much can we get done for you in 1 hour?

Scott listened to what I envisioned, gave me a detailed list of work/materials/timeline/cost (with the caveat of increased cost if unexpected problems occur). Scott did the majority of work by himself,  was always professional and cleaned up the mess each time before leaving.  He completed the job in the timeframe stated in the contract.  I would definitely call on Scott again.  Most important - I...

DESCRIPTION OF WORK
remodeled master bathroom, including enlarging the shower

Not able to provide suggestions.

DESCRIPTION OF WORK
Provider unable to do any more estimates for many months.

This rating was generated after she called me for an estimate. I have several projects going currently therefore I advised her that I am not giving any estimates at this time. I did not meet with her and I did not provide any services. I am at a loss as to why she took the time to give me a negative review. I have numerous high reviews on Angieslist for my quality projects which I have provided fo...
5.0

Very well.  I have not yet secured his services due to finances but as soon I have the funds, he is the man I will use.  I am also wanting to remodel my kitchen and other things in my home.  I trust his services the most....character.  I plan to have him as my contractor.

The overall experience was lengthy, but the quality of work was worth it.  From what I've heard from others, the fact that we had both of our bathrooms done back to back and lived through it is a testament to how smooth things went.  Even when we were sent the wrong shower doors, Scott worked with us to try to resolve it with Home Depot.  We got our shower floor (master bath) and the tub walls (ot...

DESCRIPTION OF WORK
The above cost reflects two bathrooms that we had remodeled.  Both were demo'd back to drywall, including removal of soffits that were over sinks and tub/showers.  Existing drywall was either repaired or replaced, new ceramic tile was put in both floors as well as in one shower.  We had purchased our vanity's and cabinets online from Ikea; they assembled them and installed them along with other accessories we purchased. Rooms were then painted and floors sealed.

[member name removed], Thanks you so much for the wonderful review. Todd and I enjoyed working with you and were very happy with how both your finished baths looked. I am so happy you are enjoying them. Scott
5.0

It went very well.  I love all the bathrooms as well as the hall and bedroom.  I'm am so pleased I had it all done and think I made a wise choice when I chose Scott to do the work.

DESCRIPTION OF WORK
Scott Nichols, owner of Classic Image Renovations, has done some beautiful work in my home.  After I called him, he arrived prepared to take notes and consider all the ideas I had for renovating three bathrooms as well as painting a long hallway leading upstairs and painting dark paneling in a large bedroom (he helped me to decide to go ahead and try painting rather than removing paneling).    Within a week, he sent a professionsl detailed quote by email for my consideration.  I felt the jobs were fairly priced, and we decided to proceed with one bathroom at a time.  During these bath remodels, he even helped me with some of the decisions about color, sizes and placement.  I was very impressed.  During these remodels  I felt Scott was trustworthy and reliable and never worried about his being in my home. First, he totally remodeled our upstairs bathroom.    Our house is about 50 years old  and we have lived here almost 35 years.  A few  changes had been made about 5 years prior to our purchasing it.  However, most of the bathrooms had original tile, stool, tub, shower, etc.  There was an old cast iron tub which we had covered with a ReBath tub insert some years back.  I never liked it because it was very hard to keep clean and always looked a little stained.  He removed the insert and the cast iron tub, which believe me was not an easy process.  The tub served as a shower as well and he tore out all the old tile.  We just wanted a shower...no tub...so he built a wall to enclose the opening so a shower door could be installed.  He had to re-texture the entire bathroom so that all wall texture would match. He retiled the entire shower reaching a few inches from the ceiling where he trimmed it out with an attractive narrow rounded tile.  The 6" x 6" tile we chose had a lot of color variations, so he staggered the tile ,choosing each tile individually, so that the color variations looked almost like a pattern. He built a step into the shower which he covered with tile as well, again trimming with  narrow rounded pieces.  We used a solid surface floor base and a frameless shower door, and I really think we made a wise choice.  He removed the old floor tile, and we chose a 12" x 12" tile for the floor which complimented the shower tile.  He removed the old toilet, installed a new one after completing the floor tiling.  He installed a cabinet above the toilet, tore out the old mirror along with the medicine cabinets, and then chose a beautiful rectangular mirror to hang over the sink as well as a new light fixture.  He repainted all the lower cabinets white, painted the walls a very nice soft green.  He installed all new hardware, and now it looks like a bathroom in a brand new house.He painted the hallway leading up the stairs and into the bathroom the same color.  With the new white cabinets and white woodwork, it all looks so much brighter. About 6 months later he started on the master bath.  He tore out the enitre shower, widened the space for the door.  Again we chose the solid surface shower floor.  He tiled the shower to the ceiling again staggering the varying color variations.  Again we used the frameless shower door.  He painted the room, put up a new mirror, installed new hardware and a new light fixture.  It all looks terrific. About six months later he began remodeling a bedroom with dark paneling on the walls.  The entire bedroom was very dark.  It has a private bath and had an old ugly molded shower insert which looked awful.  It was a very difficult removal for one person to do alone, but he removed it all and had to put up new studs to build a frame for a new shower stall.  We used the same shower tile, chose a solid surface base, and a frameless shower door again, but chose a different floor tile which is  larger and  is grey/green in color.  He removed the old gold toilet and installed a new one along with new fixtures.  What a tremendous job he did.  With his help, I decided to paint the paneling in the bathroom as well as the bedroom itself.  We used the light green and it looks fantastic with the floor tile he helped me choose.  Now the bedroom is so bright and inviting. He has a great eye for decorating and I found him very pleasant to work with.  I love all the work he has done and highly recommend him to anyone.