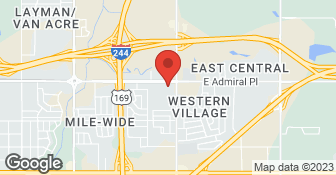 You can count on Builderhaus Construction to get the job done quickly and professionally. We look forward to helping you with all of your future interior or exterior home renovation construction and handyman needs. We would love to get our bid in for review....

Description of Work
Was introduced to this company via a Living Social Coupon. Beware of non existent fine print!! I first tried to use coupon in Spring to do drywall repair. Took day off from work - guy never showed. Company did call but only 1 hour before he was scheduled and too late for me to go to work. Gave up on having them do the drywall work. The unwritten fine print is apparently you still have to pay for 2 hours of labor to use the coupon - no where on the voucher does it say this. And the labor rate... $50 per hour!! for a painter! We finally got a guy scheduled to come out today. Apparently he's a subcontractor - on call basis. Not only did we have to provide paint, understandable for a painting project, but we had to supply the paint brushes, tape, drop cloth, rags etc. this was never discussed when I set up the appointment. For $50 bucks an hour!! This painter was running late - he did have the decency to call and he scrapped up some paint brushes to start in on the job. My dad had to go run out and get the other supplies he requested. Forewarned - be sure you ask lots of questions with this firm so you know what you are gettting into.

I eventually used the Groupon to have a doggie door installed, which only took about one hour of labor. Once scheduled, the handyman coordinated and appeared on time. He was professional and completed the task quickly and conscientiously, using cutout materials to insulate the door around the cut-out. I don't believe I got the full value of the Groupon. I also spent too much time coordinating, quoting, scheduling, etc.

Description of Work
I bought a Groupon for Builderhaus for approximately $50.00 for 2 hours of labor. I initially tried to get them to do several small jobs on the front of my house - guttering, wood repair, etc. - and was willing to pay the excess as long as I got the credit for labor. The quote I got back was higher than quotes without any credits or discounts. And, I can't say the quoting process was very efficient since it took several weeks to schedule and then receive the quote.

I was unhappy with the quality of their work. Their finish work was poor; there was no attention to detail. I would not use them again.

Description of Work
I hired Builderhaus Construction to put in some new walls, install a new door, put in a door to the garage, install a toilet and do some tile work in the bathroom.

www.VideoGeeks.TV has 20 years of installation experience. We installs TVs on dry wall, brick, cement, cinder block, and other surfaces that can hold the weight of a TV mount and TV. We can hide, in hollow walls, your cables and AC Power using NEC approved systems. Or just cables using low voltage wall plates. We can place conduit on the wall of solid walls as a 3rd option. We can install using your TV, your mount, your cables or bring everything with us to do your job. Cost of the job is dependent on what options you need. We are also known as iMedia. Check us out. www.videogeeks.tv or www.imedia.network  …

David Parker has been painting in the Tulsa area since 1979. He and his team strive for perfection and will never collect money or leave a job without the customer being fully satisfied. We specialize in both interior and exterior painting. We are always on time, we clean up after ourselves when the job is completed, and keep the customer informed from start to finish. Call us today for a free quote!  …

Insured
All statements concerning insurance, licenses, and bonds are informational only, and are self-reported. Since insurance, licenses and bonds can expire and can be cancelled, homeowners should always check such information for themselves.To find more licensing information for your state, visit our Find Licensing Requirements page.
General Information
Free Estimates
Yes
Eco-Friendly Accreditations
No
Payment Options
Check, Visa, MasterCard, PayPal
Senior Discount
No
Warranties
No

How is Builderhaus Unlimited overall rated?

Builderhaus Unlimited is currently rated 2 overall out of 5.

What days are Builderhaus Unlimited open?

No, Builderhaus Unlimited does not offer eco-friendly accreditations.

No, Builderhaus Unlimited does not offer a senior discount.

Are warranties offered by Builderhaus Unlimited?

No, Builderhaus Unlimited does not offer warranties.

What services does Builderhaus Unlimited offer?