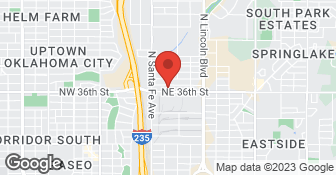 Great! On time, fair price, explained all to me, didn't ty to sell anything.

The estimate and scheduling went great, install seemed OK, until I was told my electric line going to unit had no power. Installer said he'd checked a breaker that was off by turning it on but nothing happened so he turned it back off. I assumed (like an idiot, without confirming for myself) that this was the breaker to my hot tub which is not in use. Called an electrician out next day and paid $175 to be told my breaker was off. Never felt so stupid. Flipped breaker on and since it was evening and I do not live in the house because it's being renovated, set unit on "cool only" mode and left. When I returned next day it was 97 degrees in the house. The high outside was around 70. I called first thing Monday morning and they got someone out by noon to fix it. This gentleman was great- polite and competent. He rewired everything and fixed some other things that had been done wrong. It has worked fine since. So, there was an initial screw up, but they were courteous and quick to repair it. Their customer service has been great. I'd use them again, tho I'd request to not have the same crew that installed this system. My house is old and a bit unusual, so maybe it was just something those guys hadn't run into before.

[Member Name Removed] I want to apologize for the headache this has giving you. We would like to reimburse you for the amount you paid the electrician. Please contact our office and we will get this resolved. Thank you
5.0

Everyone we worked with at Prudhom Heat & Air was courteous and professional. This family-owned business offered a good product at a fair price that met our needs perfectly. There was one small issue a few days after the installation but we called and they were back out within 30 minutes and had the problem resolved in less than an hour. We'll definitely use them for our future HVAC needs!

Great! My AC went out on a fairly warm day and I knew all AC companies would be swamped. They got someone out the same day, he answered all my questions, was very professional and did a great job at a reasonable price. I would definitely hire them again and have already recommended them to some friends.

I was very stressed calling someone out to take a look at my heating unit after hearing about so many horror stories of dishonesty and people being swindled out of there money. I got a referral from a co-worker and they were very positive about this company. I made an appointment and I am very glad I did. Eric my service tech within minutes of meeting him he eased my stress level and I felt comfortable right away. He was very friendly, respectful, explained everything in detail, answered my questions in a simple way that I was able to understand. I had such a good experience I will be using this company in the future and I would recommend them as a company of integrity.

Description of Work
My Heating Unit was putting out cold air instead of heat and the temperature was not regulating on the thermostat. Eric my service tech determined it was a heat flow issue which lead to the unit receiving false readings and it would shut down as a safety precaution. Eric did a wonderful job with determining and fixing the problem.

Dustin, from Prudhom HVAC performed the work on our system. He did a fantastic job. Also, he installed 2 digital Carrier COR thermostats in our home (in only 1 hour) which will give us better environmental control and more efficient energy consumption. This company is professionally lead thinking about the customer first!

Description of Work
We needed our fall heating system check and service.

Great. Emails reminding me to schedule. Emails confirming appointment Tech(Eric) was on time, did his job and was very professional. System works great and I am happy to be Prudhom customer..

Dustin did a superb job, taking my outside unit apart and cleaning it better than anyone has ever done in my 22 years living in my house. He has been the most thorough of any air conditioning service tech I have ever had at my house. Utmost professional, knows his business and an ultimate pleasure to deal with. I highly recommend using Prudhom Air for your air conditioning needs.

They are great about explaining what they need to do and how to operate new products. They are responsive to your call for service and they are friendly and professional.

The crew did an exceptional job on the installation. Ernie Prudhom was very informed about the best carrier system for my home and helped me complete the ONG rebate form that will save me some additional money. Very happy with the system and the company.

How is Prudhom Heating and Air Conditioning LLC overall rated?

Prudhom Heating and Air Conditioning LLC is currently rated 4.9 overall out of 5.

What days are Prudhom Heating and Air Conditioning LLC open?

No, Prudhom Heating and Air Conditioning LLC does not offer a senior discount.

Are warranties offered by Prudhom Heating and Air Conditioning LLC?

What services does Prudhom Heating and Air Conditioning LLC offer?