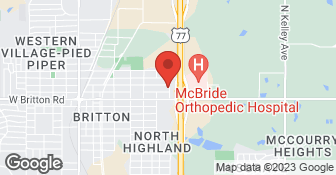 Locally and family owned and operated. 24 hour 7 days a week emergency service is available. We are a flat rate pricing company.Oklahoma Air is a Trane Comfort Specialist™. This certification is only awarded to an elite group of dealers that meet Trane's stringent standards and demonstrate a commitment to customer satisfaction and continuous training. We service all central heating and air brands, and install Trane products....

Mark and his crew installed my AC and heating unit 12 years ago and I have had them perform the yearly inspections every year since then. They have always been very friendly and helpful with excellent service. Oklahoma Air is a company you can trust.

Mark and crew had taken care of heating and air conditioning needs at this home for many years. When we purchased this house 15 years ago, we continued the annual service contracts - and have been more than satisfied with service. Oklahoma Air upgraded our equipment - excellent experience - and provided good advice when we needed to replace other household equipment. Service is always prompt, professional, and reliable - and at reasonable cost.

Mark and crew are great. Mark was punctual and professional, reviewed the problem and gave us an estimate within a few hours. This is not the first time I have used them. They do my heat/air check spring and fall and are always helpful. Once when my system quit I the middle of the night an the middle of the winter. Mark himself came out cleaned few things and the system ran great! I cannot thank them enough for their professionalism and service.

Came to our home, replaced a faulty wire in our outside AC unit. Unit caught fire same day after wire replaced. Wire placed was area start of fire. Talked us into replacing entire unit. Did not replace 24 year old intake duct work in attic. Did not put in additional intake air duct for larger tonnage unit installed. Is difficult to contact and communicate with. May be under staffed.

We have two units in the attic and one quit working. They did well. They sent two workers.

Description of Work
The pipe that drains the moisture was clogged.

They answer their phones. Their employee was close to on time. Not the best service. Not the worst. I will keep looking. The prices are unreasonable given the rigor of the work.

Have used them for about 10 years now and have never been disappointed. They are professional, prompt and have great customer service.

Description of Work
Semi Annual preventative maintenance on HVAC and electronic air cleaner. Cost was for the annual service done in the spring and the fall.

They were great, on time, the technician was very politely and very efficient.

Description of Work
They checked the heating system, replaced filters and made sure the furnace was running properly.

He checked the unit and supposedly cleaned it and came in and said there were no leaks and we were good until next time. Then, he said there must be a small one somewhere, because he had to add one pound of freon, but if we wanted him to find the leak, it'd cost $165 more dollars. I THOUGHT THERE WERE NO LEAKS!!! Some time later he came back in and the unit was shot, and I needed a new one! Then he checked the inside unit, and guess what? It, TOO, was completely useless and needed to be replaced also!!!! So I got out my paperwork from when we bought it, and coincidentally, THE WARRANTY EXPIRED LESS THAN TWO MONTHS BEFORE!!!. Red flags were going up all over! The next day, I called two other companies to come out and "service" our a/c.....the first one charged a service fee, and said we HAD NO LEAKS OR OTHER PROBLEMS!!! The second guy came out, checked everything out thourghly, and, once again...nothing was found wrong!!!!!!!! What do you make of all this? Needless to say, I won't be replacing this unit. In the future, if I do start having trouble, I won't be using these guys. I still can't believe this happened, and I almost got scammed. My advice? ALWAYS GET A SECOND OPINION

Description of Work
It was supposed to be the $89 spring check up, but when it was all over, it skyrocketed up to over $300.

Mrs.[Member's name removed] , we reviewed your service records and it indicates that our technician performed an air conditioning check as part of your maintenance plan ($159 for the year) and a halogen leak test for $165 and did add a pound of Freon (that you were not charged for), and found several leaks; in the evaporator coil and both king valves and Schrader valves. The existing system was over ten years old, and the technician would not have done anything without pre-approval of charges from the customer. The halogen leak search is the proper way to detect leaks that cannot be found by a simple visual inspection. If the other companies did not perform the proper leak test, they would not have found the leaks. Our technician would not have recommended a replacement if he did not think it was the best option to save money in the long run. We appreciate your business and hope to resolve any further issues you may have. Please call our office directly so we can better serve you in the future. By calling the office, you can speak to Mark or Cathie, the owners, directly.
5.0

Excellent! They installed a flip for us. We expected cooler temps for that week but this is Oklahoma and it was hot instead. Our installers were Evan, Joe and Cody. They were very patient answering all my questions sometimes more than once. Since I use the attic for additional storage they elevated some of the duct work for my convince without my asking. I recommend them highly.

Comfort Xpress is here to make sure you get the most out of the heating and cooling systems in your home or office. In the event your equipment needs servicing, you can have peace of mind in knowing we're centrally located in Ohio, and only a phone call away. We offer emergency 24-hour service. Need a new system? We can install or design any type of heating or cooling system for your home or commercial building. We install only high-efficiency comfort systems designed for cost-effectiveness. Call us out for a free estimate. We offer Comfort Club Memberships for regular system "tune-ups" and preventative maintenance. Preventative maintenance will help to extend the life of your heating and cooling system and offers peace of mind during Ohio's unpredictable seasons.  …

Triple Play Home Services/HVAC Solutions is a Full Service Heat & Air Company. We're confident in our GREAT Financing options, and life-time warranties! We accept cash, check, Visa, Mastercard and Amex, as well as billing for businesses From Residential to Commercial and even Property Management of all types, we are your One Company! We have the ONLY full service HVAC showroom in Oklahoma. We have over 20 years combined experience with a GREAT team of highly trained professionals that are not only great with equipment but with YOU, our customers. We service all brands and focus on selling and installing Amana Quality and Innovative Equipment!  …

Bonded
Insured
All statements concerning insurance, licenses, and bonds are informational only, and are self-reported. Since insurance, licenses and bonds can expire and can be cancelled, homeowners should always check such information for themselves.To find more licensing information for your state, visit our Find Licensing Requirements page.
General Information
Free Estimates
Estimate for system installation is no charge.
Eco-Friendly Accreditations
No
Payment Options
Check, Visa, MasterCard, Financing Available
Senior Discount
No
Emergency Service
Yes
Warranties
Yes

Oklahoma Air Conditioning Inc is currently rated 3.9 overall out of 5.

No, Oklahoma Air Conditioning Inc does not offer eco-friendly accreditations.

No, Oklahoma Air Conditioning Inc does not offer a senior discount.

Are there any services Oklahoma Air Conditioning Inc does not offer?