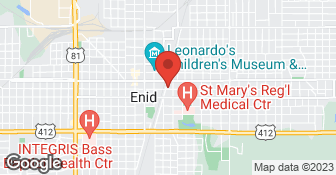 Prompt reaction in a crisis. We had a sewer line rupture in our building basement — a crisis for us. Luckinbill was quick to respond to triage the situation and within two hours had the heavy equipment and personnel on site to do excavation and repair. Thanks to Luckinbill’s James Jones, a smart guy with a good ol’ boy personality who made things happen — FAST — when we really needed it.

We noticed leaking water heater on New year's Eve morning-- First two plumbers we called said no way till next week--Luckinbill said would come on New Year's day, but charge double time labor--We agreed but later that day they freed up a plumber and finished both jobs by 5:10 PM

They came out, ran a snake and camera down the line. Told me it was a good line, clear to the main. Said the Main line was approximately 10-12 feet deep and a new main would run several thousand dollars. After digging up the line to install new piping, for a new location, I tried to run water through the line and it was clogged, not open to the main. I called the guy who did the work and he returned for no charge. Together, we discovered that when the gas company installed a new line, they broke through the sewer line and sealed it off by placing wet cement in a bag and stuffing it in the end of the broken pipe. This would not have posed a problem if I would have known about it. I rented a track-hoe to dig the ditch for the new piping and didn't dig up the portion in the alley where the break in the line was because I was told it was good to the main. I then had to rent another tractor to finish digging up the bad line and buy more pipe to replace the bad portion. While digging up the remainder of the pipe, I found that the line had been cut into buy yet another utility with a trencher during installation of an underground cable right next to the main line. The main line is only 3 feet below the surface. The unknown delayed project completion nearly 3-weeks and increased the cost about $500. All-in-all, I'm not quite sure what I paid Luckinbill for.

Description of Work
I called and asked for an estimate for a new service tap into the city sewer main line. They called and recommended that I have them run a camera down a known, existing line to see if a new tap was necessary and told me it would be under $500, so I agreed.

Luckinbill Inc. Mechanical Contractors is currently rated 4 overall out of 5.

No, Luckinbill Inc. Mechanical Contractors does not offer a senior discount.