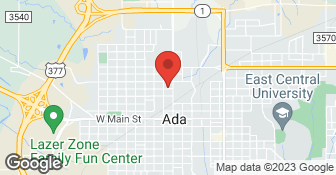 Ram Jack of Oklahoma provides foundation repair services for residential and commercial structures. We have over 300 products to address issues with slab and crawl space homes as well as drainage correction....

Description of Work
The father/son team was very professional and explained everything they were doing. The floors were definitely more stable after their work.

Description of Work
He came when he said , gave an honest estimate and completed the job on time

Description of Work
Inspected foundation for pier repair on outside. Did not look inside (have basement.) Stated I needed considerable, expensive repairs first before they could do anything and refused to pier my home interior or exterior until such time.

Description of Work
We were told by another company that we needed thousands of dollars of foundation work performed on our home. We called Ram Jack for a second opinion & were told nothing was wrong with our foundation. Very prompt, honest, & professional

It took a few weeks to get an appointment for a quote. Ronnie Randolph recommended that we get piers put both outside and inside, but before we could do anything he recommended that we get a plumber in as he felt we might have a leak in the kitchen area. He also recommended that we contact our insurance agent as if it was a leak some of the foundation repair might be covered by insurance. It took us a while to sort out the plumbing. Yes there was a leak (old pipes) and that likely lead to additional damage in our kitchen, dining room, and lounge areas. We did get some of the work covered by insurance. Once all the plumbing was sorted we got Ram Jack to come back as it was evident that there was more movement. That did add to the quote but we could tell ourselves that what was recommended was needed. We signed the contract to get the work started. Ram Jack (Jose and his team) started late July and had the outside nearly completed within a week and then started on the inside. From day 2 we could see things moving back into place. I had taken a number of before shots so that I could really see what was going on and how things have changed. It was very exciting. Having the outside of the house done was no problem. But keep in mind that they will have to dig up plants. If you like those plants then you probably want to dig them up yourself and keep them well watered. We weren't precious about our plants and in fact, they looked better after Ram Jack had finished! Working on the inside was more difficult. We moved out all the furniture in the affected areas but still lived there. In hindsight, it might have been more comfortable for us if we didn't as there is a lot of dirt that gets dug up. The workmen try and keep things as clean as possible but it was a big job. There were 19 piers put inside. Excitingly, doors now open and close with ease, benches are now aligned with the wall, and gaps between the cellings and walls meet. Jose was very excited to show us what was now fixed. However, there was some big movement going on so there are a number of cracks (some new) in the walls that will need fixing (wait for my interior decorators review). Jose was really good at making sure I knew what was going on. There are some things that can only be predicted, such as how deep the piers can go. Ours need to go down 37 ft to hit bedrock not the estimated 30 ft. There was also a couple of extra piers recommended. One set was in an area that was obvious would need to be done eventually so rather than have them come back I could just agree to getting it done right then and there. On day one they broke a water main. This was fixed and is part of their cost. Ram Jack has been and gone but our home still needs a lot of work as the roof needs replacing and the interior (walls and floors) need fixing. Would I use them again - yes. Did I think things went well - yes. Am I happy with the job - yes. Do I wish it was cheaper - yes, but would I do it all again if I had to - yes.

Description of Work
We were in dire need of foundation repairs. It's a common problem in this area. We had cracks in the walls (both inside and out), many of our floor tiles had cracked and doors didn't open and close properly. We knew it was going to be a big job. Jam Jack had been recommended to me by friends.

Although it took 2 weeks, by appointment, to get an estimate. The rep was on time (actually early) and have us a curtesy call. He got right down to business and told us what was recommended and didn't try to sell us anything we didn't need. He gave us an estimate that was cut and dry and exactly what we ended up paying. They came in 2 days to do the work and got 5 piers installed in about 3 hours. They leveled that end of the house and all cracks closed up and all doors/windows are working fine. Once we got our estimate, they made the rest of the process easy for us. I'd highly recommend this company. They're professional, knowledgeable and reasonably priced compared to other foundation repair companies

Description of Work
Installed 5 steel piers at corner of pier and bean house to repair settling.

I have only received an estimate. The work will be done in a couple of months. They would have done the work a month ago but I have a big boat in their way and it would be difficult for them to access the problem area until the boat is back at the lake.

Description of Work
Mr. Randolph has been to my home to estimate repairs to my foundation and is also the VP of the company. He was on time and very nice and informative. He is the kind of man you can talk to for just a few minutes and it's like you are friends already. He's been in the business for a long time and has done it all and I feel very confident with his advice and estimate. I have spoken with the ladies in the office and they are extremely knowledgeable and helpful. I am really tickled to have found Ram Jack. They are to work on my foundation in a couple of months and I feel very confident they will do a great job. I only wish they had an office closer to my city because Mr. Randolph and the workers have to drive a couple of hours to get to my home.

We specialize in foundation repairs, French Drain installations, and more! We guarantee your satisfaction, and we won’t leave until the job is done right. We pride ourselves on the quality work we provide, while delivering great customer service! Check out all the services we offer below and call -or- click to schedule a free estimate today!  …

PierMan is dedicated to providing lasting foundation solutions. Our mission is to provide the right repair for each structure we work on. We pride ourselves in doing quality work on time for each and every customer. Our evaluators are certified by DynaPier and are required to have structural education every year. Every project has a different repair plan. We show our customers what is causing the structure’s foundation issues and the right repair plan. Using the best repair methods coupled with the right repair plan we are able to offer our customers a lifetime warranty on our foundation piers. Pierman is located in Ada, Oklahoma that services Oklahoma and north Texas. We specialize in Foundation Repair, House Leveling, crawl space and pier and beam repair. We understand foundation repair projects can be confusing or overwhelming to homeowners. Our mission is to take the time to explain and educate foundation repair to homeowners. During this time we go over the cause of damage, repair solutions and repair process. After meeting with one of our professionals you will agree that we have the best solution at the best price for you and your family.  …

How is Ram Jack of Oklahoma & Arkansas overall rated?

Ram Jack of Oklahoma & Arkansas is currently rated 4.9 overall out of 5.

What days are Ram Jack of Oklahoma & Arkansas open?

What payment options does Ram Jack of Oklahoma & Arkansas provide

No, Ram Jack of Oklahoma & Arkansas does not offer eco-friendly accreditations.

Does Ram Jack of Oklahoma & Arkansas offer a senior discount?

No, Ram Jack of Oklahoma & Arkansas does not offer a senior discount.

Are warranties offered by Ram Jack of Oklahoma & Arkansas?

What services does Ram Jack of Oklahoma & Arkansas offer?