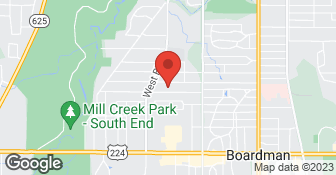 We are a fully insured construction company that has been in business for over 20 years. We do commercial and residential work....

This whole project went so much better than I could have ever hoped for. I am extremely pleased with the detail Joe and his workers had for every part of the job.

Description of Work
I was so impressed with Joe Guerreri's work on my room renovation that I almost hate to share him with anyone else. He come and gave us an estimate to make our enclosed porch a family room and he was by far the most reasonable. I had heard of his work somewhere and I knew he was trustworthy- but I had to see for myself. He started the job on time. He went above and beyond all that he said he was going to do. I had walls put up ceiling recessed lighting, siding on the addition, new french doors, install a fireplace and wall television, new outside doors, new floor, and all electrical and finishing work and it all went according to plan. He helped us with ideas to make the room nice. We had someone to add the furnace and air for that room but Joe worked with him on the project. His men were absolutely wonderful, prompt and very neat. I just can't say enough good things about this company. I will never use anyone but him in the future! In the spring, Joe Guerreri is coming back to side the rest of the wood trim on my house. I don't know now what it will cost but I am sure Joe will be fair and reasonable. He is so detailed and doesn't forget a thing! He made the whole project on my house so much easier!!!

In fairness to Joe Guerrieri, he had several employees / contractors working for him at the time. He did not do all of the work but was responsible for bringing in workers and other contractors who performed various services for him. I had no complaints with: 1. The kitchen cabinents-- these were installed correctly. 2. The shower head-- also installed correctly. 3. The various electrical outlets-- these were also installed correctly. 4. The mulch that was laid down- this was fine. However, everything else was shoddy and was done incorrectly. 1. The drywall was not hung correctly. It is not lined up correctly and is not level. Several sheets to this day, still need additional screws and the drywall "sags" in certain areas of the home. 2. The carpet was not installed correctly- it is bunched up and has hills and valleys. The carpet was not stretched or installed correctly has many "speed bumps" throughout the entire floor. 3. When he replaced the kitchen and bathroom flooring, he neglected to put down an underlayment, which has caused all of the existing tile to crack. Many of the ceramic tiles are cracking because he took shortcuts and put no underlayment down when he installed the ceramic tile. 4. The painting that was done was very sloppy and he used one color (against my wishes) on the baseboards, walls, and ceiling. 5. The kitchen faucet was loose and was not installed correctly. He overcharged me for the work; his prices were exorbitant. Moreover, when I called him about the shoddy workmanship months later, he blamed the work on the people that used to live in the home. The bottom line is that he took shortcuts in the work and made errors that would only show up much later-- after he already had gotten paid to do the work. Moreover, I feel that after talking with him on several occasions-- he lacks professionalism. I would strongly recommend never using his services to anyone. Any questions or if you would like pictures of the poor workmanship, email me: matthew.huberty@gmail.com

Description of Work
I hired Joe Guerrieri to renovate and rehabilitate a rental property that I owned in Youngstown, OH (Boardman). The work he did was very shoddy and was not done correctly. While he worked for me he did many things. This is a list of the things that either he and his contractors did while working on my home: 1. Installed drywall in an upstairs attic/bedroom. 2. Installed lighting, outlets (electrical, cable, and phone) in the same bedroom. 3. Installed carpeting throughout the entire home. 4. Painted the entire home. 5. Replaced flooring and installed ceramic tile in the kitchen and bathroom. 6. Installed a shower head and new tile around a bathtub. 7. Installed kitchen cabinents and a new faucet in the kitchen. 8. Removed landscaping and laid mulch.

Super Service Award-winning company on Angie! The Basement Guys® of Cleveland is Northeast Ohio's exclusive installer of patented, trusted, and proven basement waterproofing, crawl space repair, basement finishing, foundation, gutter protection, gutter replacement, and concrete repair. Our trained and experienced servicemen have the answers to your home's exact problems. We've helped hundreds of Ohio homeowners remodel their basements or repair sinking foundations. We know our waterproofing, encapsulation, basement finishing, and structural repair systems work, but don't just take our word for it. Check out the testimonials from other homeowners throughout Cuyahoga Falls, Cleveland, Akron, and Northeast Ohio who have said the same thing. From a wet basement and cracks along the foundation wall to damaged concrete and gutters, The Basement Guys® of Cleveland can help with all your basement needs.  …

Redefine what it means to be home! Redefine Floors is a 3rd Generation Flooring Company with over 50+ years of experience. Our family believes in making your vision come to life while treating your home as we would our own.  …

At Construction Fleet we pride ourselves on the best customer service and the most transparency. We never have extra fees or hidden costs for our clients and always strive to give the best customer experience as well as finished product for the best cost in the area. We have multiple crews that are fully licensed and insured with experienced general contractors that have high skill in flooring, decks, tile work, demolition jobs, kitchen / bathroom remodel, metal roofing, and almost anything you need done between their 5-35 plus years in the industry. We are happy to give free quotes in a timely manner. Also we pride ourselves in only hiring contractors with strong integrity and work ethic so you can always count on us and our team to do the best work for you.  …

Insured
All statements concerning insurance, licenses, and bonds are informational only, and are self-reported. Since insurance, licenses and bonds can expire and can be cancelled, homeowners should always check such information for themselves.To find more licensing information for your state, visit our Find Licensing Requirements page.
General Information
Free Estimates
Yes
Eco-Friendly Accreditations
Yes
Payment Options
Check
Senior Discount
No
Warranties
No

Joe Guerrieri Construction & Remodeling is currently rated 3 overall out of 5.

No, Joe Guerrieri Construction & Remodeling does not offer a senior discount.

No, Joe Guerrieri Construction & Remodeling does not offer warranties.

Are there any services Joe Guerrieri Construction & Remodeling does not offer?