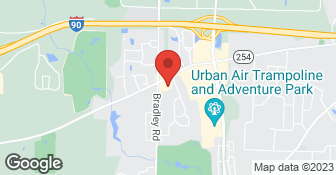 We had our backsplash tiled with subway tile and mosaic trim. The installer did the majority of the install over parts of two days. It looked great. He then said the install was done except for one corner piece that he ran out of. He said it should arrive the following week and that he would call and pop in to install it. Two weeks later, my general contractor had to get ahold of him to finish the install, so basically it took two weeks to complete. That one corner piece doesn't sit flush with the other tile and is very obvious. The worse part is that the bottom of the entire backsplash that meets the tile was grouted instead of chaulked. The grout is already cracking after only a couple weeks.

We are very sorry to hear you rate your experience this low. It is our goal to make sure you are completely satisfied. Please let us know if you would like us to reset the one small tile that doesn't look right that you are referring too. Also regarding the cracked grout along the counter top. this is the counter top and cabinet settling not the tile, Almost anyone who has a tile splash has had this happen to them. It is common for cabinets and granite to settle or they may be loose but I assure you the tile is not moving, we do not use caulking for this because caulk tends to mold and mildew and can be hard to clean down the road, we simply regrout once every thing is done settling at no charge, Please call to set this up if you would like help. Thanks Westbay Staff
5.0

They were very good. I was very satisfied with them.

Description of Work
I had them install a floor. I had a luxury vinyl installed in my kitchen.

Description of Work
They gave me an estimate. They are going to put in (3:55-4:01) vinyl in my kitchen floor

When I had my kitchen floor installed, I was pleased, therefore, I had them come back and install carpeting in my front room, hallway, stairway and two bedrooms. In the process of installing carpet in one of the bedroom closets, they knocked the closet rod down. They readily acknowledged that they were in the closet when it happened and said and quot;It rained clothes on usand quot;. But they denied any culpability. I was told that the problem was that my closet rod was installed incorrectly and and quot;this happens when you are kicking carpet into the walland quot; Never mind that I had no problem with that closet rod or any other closet rod that has been installed for the last 15 years, they didnt want to be confused by the facts. When I brought it to the attention of the store, they were more interested in getting my payment and said they would talk to the installers. I received a phone call from Scott, who only stonewalled me and denied any responsibility for the damage. He was confrontational and tried to intimidate. THis follow up call was not meant to resolve anything but to tell me I was wrong for expecting them to correct the problem. He tried to say this is not unexpected and when I said that if this is an acceptable outcome I should have been warned in advance, and he said and quot;did you read your contract?and quot; At that point I was exasperated and realized the futility in the conversation. I ended the conversation very disappointed. I am sorry to say that this disrepect and lack of regard for me as a customer has left a bad taste in my mouth. It seems like it would have been easier to remedy the damage, but apparently they have enough work that a lost customer is ok.

Description of Work
They installed flooring in my kitchen and carpeting in three rooms, stairway and hallway

I went to WestBay Floor Source (formerly known as and quot;WestBay Decoratingand quot;) to inquire about new carpeting for our living room, dining room, hall, and stairway. The salesperson was very informative about the pros and cons of several different carpets that met my requirements. She also allowed me to take as many samples home as I wished to see how they looked in the lighting of our home. When I made my selection, she arranged for someone to come to measure within the next week. I received a written estimate by email with all the details of the installation requirements for me and for them. I returned a signed copy of the estimate with a 50% down payment. One month later, an appointment was made for installation. Two men arrived promptly, introduced themselves, and got to work. They removed our old carpeting, padding, and staples from our hardwood floors and moved the large pieces of furniture (including a spinet piano) so they could install the new padding and carpet. They worked very well together as a team and complied with any requests I had. They vacuumed thoroughly when they were finished and took away all the old carpet and scraps from the installation. They left us the larger scraps in case we have repairs needed in the future. They were completely finished in 4.5 hours and we are very pleased with the installation. We have used WestBay Floor Source for 2 kitchen floors, a bathroom floor, and now 2 carpet installations. They have always been professional and painstaking in their work.

I liked them very much. They did a good job and followed up on everything. I think they also did work for one of my daughters.

Description of Work
They put in a laminated floor for me. They also put a backsplash in my kitchen.

They seemed very good. The decorator was very helpful and responsive. Their quote was competitive.

Description of Work
I had a quote and consultation with this company for some flooring.

All in all we were happy with Westbay. The sales personnel were quite helpful and the entire transaction took about 2 weeks from start to finish. We found the selection of material to choose from to be extensive and in price ranges for nearly all pocketbooks. The installers were quite skilled and did a very good job. They were not the neatest in appearance and could have been a little more respectful of the homeowners property. They did not appear to have a canvas to protect our carpeting (we laid down a sheet), tools were dropped on a vinyl floor instead of being carefully laid down, and adhesive had to be cleaned from a door and floor. To be fair, this is a messy job and they did an above average job of cleaning up after themselves but a little more care could have been shown.

Description of Work
Installed vinyl flooring in a bathroom and repaired seams in another vinyl floor that were separating.

Description of Work
INSTALLED CARPETING ON STAIRS AND HALLWAY AND IN ONE BEDROOM.

WHILE THE WORK THAT WAS PERFORMED WAS EXCELLENT, THE ATTITUDE AND LACK OF PROFESSIONALISM OF THE CARPET INSTALLERS WAS HORRIBLE!! THEY PUT SCRATCHES ON MY ANTIQUE HUTCH WHEN THEY WERE MOVING IT. THEY WERE OVER TWO HOURS LATE ARRIVING FOR THE JOB. THEY COMPLAINED ALL DAY WHILE THEY WERE WORKING ABOUT HOW THE COMPANY DOES NOT PAY THEM ENOUGH. THEY TOOK IT UPON THEMSELVES (MORE THAN ONCE) TO ADJUST THE AIR CONDITIONER (AT ONE POINT THEY HAD IT AT 60). WHEN MY HUSBAND CALLED TO THEIR ATTENTION SCRATCHES THEY PUT IN ANOTHER PIECE OF FURNITURE, ONE OF THE MEN STARTED YELLING AND ARGUING WITH MY HUSBAND. HE WAS CALLING INSULTS TO MY HUSBAND WHILE STANDING OUTSIDE IN OUR DRIVEWAY. WE CALLED TO COMPLAIN AND WHILE SOMEONE DID COME OUT AND LISTEN TO OUR STORY, WE HAD TO BE REALLY FIRM AND PERSISTENT ON HOW WE WANTED THE COMPANY TO CORRECT THIS HORRIBLE CUSTOMER SERVICE. WE DID RECEIVE A COURTESY REIMBURSEMENT FOR SOME OF THE COST OF OUR CARPET BUT IT TOOK A WHILE TO GET TO THAT POINT.

WE HAD WATER DAMAGE IN OUR BASEMENT RECREATIONAL ROOM and NEEDED A DETAILED INVOICE ACCOUNTING FOR EVERY PENNY OF THE COST OF NEW CARPET INSTALLATION FOR THE INSURANCE COMPANY. GEORGE WAS WONDERFUL - HE FAXED EVERYTHING WHERE and WHEN IT NEEDED TO GO. THEY WERE VERY POLITE and PROFESSIONAL IN INSTALLING CARPET. WILL DEFINITELY GO BACK!

Description of Work
HELPED IN SELECTING CARPET, AND INSTALLING IT.

VERY PROFESSIONAL, POLITE, GOT JOB DONE QUICKLY AND NEATLY, CLEAN UP WAS EXCELLENT.

✨ The House Doctors : A Full Service Company - Office # 216-376-9014 & Mobile # 216-376-9014. We Are A Complete professional contracting company , in which we cover all home & commercial needs ! No subs. Cost is determined by the job. Free estimates & no travel charges. Extra charge for after-hours service. Award winning ! A family owned / operated business since 1975. Additional contact name - Robert J Vecchio Sr. Email Address ; mikehousedoc@gmail.com We do communicate via : Phone , Emails & Texting. We accept ; checks , cash , money orders , & sometimes credit cards. We sometimes will also offer financing for jobs $ 3,000.00 & above. We do offer 10% senior citizen discounts ( must request upon original estimate ). Please put your trust in us , to get your projects done professionally right ! Thank you , The House Doctors. Visit our website at : www.the-house-doctors.com  …

We dedicate ourselves to consumers needs as far as general home remodeling. That can be from painting, tile work, drywall install or repairs, kitchen remodels, bathroom remodels and basement remodels. We look forward to making your home the way you want it with absolute satisfaction!  …

Bonded
Insured
All statements concerning insurance, licenses, and bonds are informational only, and are self-reported. Since insurance, licenses and bonds can expire and can be cancelled, homeowners should always check such information for themselves.To find more licensing information for your state, visit our Find Licensing Requirements page.
General Information
Free Estimates
Yes
Eco-Friendly Accreditations
No
Payment Options
Check, Visa, MasterCard, Financing Available
Senior Discount
NO
Warranties
Ask for details

WESTBAY FLOOR SOURCE is currently rated 4.6 overall out of 5.

No, WESTBAY FLOOR SOURCE does not offer eco-friendly accreditations.

No, WESTBAY FLOOR SOURCE does not offer a senior discount.

No, WESTBAY FLOOR SOURCE does not offer warranties.

Are there any services WESTBAY FLOOR SOURCE does not offer?