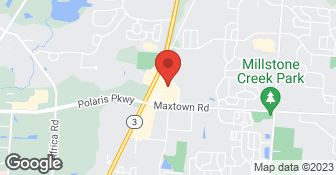 ART GALLERY, CUSTOM PICTURE FRAMING AND GIFT GALLERY. Our art is original art from local artists and from artists all over the world. We represent seven potters and ceramic artists from the USA and one metal artist from Canada. We have a full line of our own ready-made frames for those simple, cost effective projects. Whether it's paper, canvas or three dimensional to go into a shadowbox, no job is to large or to small for us to frame. All work is done on premise and "OUR WORK AND YOUR SATISFACTION ARE GUARANTEED 100%". 30yr. business...

Last June (2017) my daughter and I had a once in a lifetime opportunity to spend five nights attending a certain concert tour here in Columbus. Since it is her favorite band, and I enjoy them as well, it made it even more special. The very first show I noticed a souvenir that said "Limited Edition - Total of 54" and I new that each show would have these. Right then I knew that I wanted to get a souvenir from each show and make something special for her for Christmas. In October I went in to Andy's shop and met with him, taking in a simple drawing and an idea of having the whole thing matted and framed. Andy spend a good 1/2 hour with me and the drawing going over my idea, asking me questions, and making suggestions. I wanted to add the concert tickets from each show, and photos from each show to this project along with a small poster. Andy's first question was "what do you want to accomplish with this project?" I told him that attending all 5 shows was a once in a lifetime experience, and I wanted this project to be a one of a kind "once in a lifetime" gift. With that answer, he replied "Then this needs to be a shadow box, and not a matted piece". THAT is where the 1/2 hour came into effect. He explained what his idea was, brought out examples, pulled out frame colors and styles, and laid out one of my souvenirs along with a photo and the poster so I could visually see what it was going to look like. He took the time to measure each piece, so I could easily figure out the size pictures I needed to print for my project. Christmas came and went and I was not able to obtain the Night 4 souvenir. Fast forward to February of this year (2018) and I got my hands on the missing piece. My daughters birthday was coming up the beginning of March so I immediately went into Andy's shop. Low and behold he remembered me and the project. He didn't have my information in the computer so this was most impressive. We met for another 1/2 hr going over the project again. I let him know that the original picture sizes we spoke of would not print properly and gave him what I had. He said "no problem, I can make this work". While he had everything, I decided to change one of the pictures (lower right corner of the drawing) and I brought him two photos to ask his opinion. After not being able to decide, I just said "you decide and surprise me". Fast forward again to my daughters birthday, and I went to pick this up. It is a HUGE piece. Roughly 4x4 and he used "both" pictures that I couldn't decide on. I left it wrapped in the brown paper that it came in from the frame shop. I had her close her eyes and stood it up in front of her. When she opened it, it literally took her breath away. She couldn't speak, and the tears rolled down her face. "THAT" is what Andy did for me. Are there box stores out there that can do custom framing at a lower price? Probably. The better question is, can those people look at what you have, build something based on your ideas, and make a truly "one of a kind" piece? Probably not. If you wan't your piece done right, and you want personal service then I can not recommend Andy's Custom Framing any more than to say "This is where you NEED to go". THANK YOU ANDY!!!! Thank you, thank you, thank you. You turned my idea into a reality and made a gift that will last my daughter a lifetime.

They do amazing work. The store seems small but they have many brands of frames packed in there. I have come back after shopping elsewhere in seemingly larger stores that don't actually have more frame choices. Both Andy and Karen have the artistic knowledge needed to advise you on what would look best.

Description of Work
Andy and Karen have helped me frame many pieces, most recently high school graduation photos.

The staff does a wonderful job. Very helpful in choosing and pricing the frames. The work is true craftsmanship. Best framer in Columbus.

Description of Work
Ive had two pieces framed at Andy's.

The final work product was excellent. Very well done and professionally finished. We will be very happy displaying the art on the wall. Will definitely use them again for additional framing services.

Description of Work
Framed 2 artist proof pictures that I had purchased.

I had something special I wanted framed and it needed the touch of a specialist. I had several of my gramma's specialty recipes in her hand writting I had professionally framed years ago...four recipes pasted in a very traditional frame...BLAH. The matting/frame didn't go with my current decor and it just didn't represent the special relationship I shared with my gramma. After visiting several framing stores...I ended up with Andy. I had worked with Andy years ago but in moving across town had been using "more convenient" framers. For this project I wanted the best and was willing to forgo convenience and I am so glad! After years Andy still recognized me and in sharing my vision he quickly and expertly put together the most amazing way to display my treasures. I can't wait to get my "art" back because I know it is going to rock the kitchen! And in the future I'll be forgoing convenience...Andy showed me today he's worth the drive!

We took an heirloom tile piece into Andy's for framing. What we ended up with was better than we had imagined. The frame is perfect for the piece and complements it beautifully. We will return to Andy's for the valuable customer assistance and the quality workmanship.

Good morning [member name removed], Thank you so much for your time given to this review. It really does matter more than you know that we always get new reviews because so many of our new clients search for us on line and read the many reviews that great customers like you provide. Thank you again. And a reminder that we have your next piece ready for pickup. Have a wonderful day and we look forward to seeing you soon. Andy
5.0

Andy was very helpful once I gave basic info as to what I was looking for to enhance my 15"x21" picture, but at the same time, not overwhelming the art. He guided me through the selection process without pushing his own opinion. The work was finished by the date he gave me and the workmanship was excellent. I was very pleased with the finished product. The picture hangs in a prominent place in our home and we have received a number of compliments from visitors. I highly recommend Andy's Framing for those looking for quality workmanship and advice in selecting an appropriate frame.

Description of Work
picture on canvas was framed

We have been very pleased with everything we have taken to Andy. His recommendations and opinions have been very valuable and the work he has done has been outstanding.

Description of Work
Andy has been doing our framing for 15 years. Everything from restoring an antique mirror to hanging a large oil. We have had Andy do several framing jobs.

Karen helped me and recommended frames and matting that perfectly complimented the artwork! She could not have been more pleasant. She also recommended that I not use museum quality glass which brought down the expense, but saying it was so small that I did not need to spend the money. Then, as she calculated the cost, she discounted it for me to keep my expense u der $100. She has great taste and excellent customer service! She called me a few days before the date it was promised to me to let me know it was ready. Overall, a superlative experience!

Description of Work
Framed a special piece of paper that I love.

I had used Andy's in the past and tried them again. They do excellent work! Everything always looks amazing and so professionally done. They give great options for you to choose from. I will use them again.

We have the experience and dedication to get the job done right! Specializing in Carpentry and Cabinet Making services; We guarantee your satisfaction, and we won't leave until the job is done right. We pride ourselves on the quality work we provide, while delivering great customer service! Call or click for your FREE estimate today!  …

ANDY'S FRAME SETTING is currently rated 5 overall out of 5.