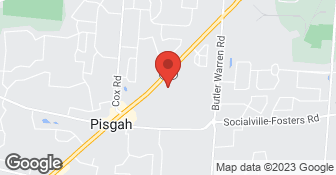 I was very pleased with the pricing and the workmanship. They charged only $45 to diagnose the problem, then credited that toward the final bill. They went beyond just fixing the problem that I brought it in for. They gave the mower a thorough inspection and found some other potential problems that hadn't failed yet. I know this process can be misused by some companies just to jack the price up, but in this case I believe they found legitimate issues and gave me reasonable prices to fix them. And I'm guessing I got lucky on their workload since they turned it around in a couple of days.

Description of Work
The engine on my lawn tractor apparently blew the head gasket and starting spewing blue smoke with smells of burning oil.

Thank you for your business ! We truly appreciate it and hope to help you with any outdoor power equipment needs.
1.0

Work was completed 11/21/2018: drained & refilled engine oil; replaced carburetor, cleaned out fuel tank, replaced fuel(charged for .25 gallon) & added stabilizer. When I picked up the blower they started it for me to demonstrate it worked. I took it home and tried to start it on 1/13/2019 (1st time I tried to start since picking it up from Jericho in November), but it would not start. I took it back to them on Tuesday 1/15/2019 to fix it correctly. They tried to start it but could not do it. The tech told me it was flooded. I left it for them to fix. I received a call from Jericho that same day 1/15.2019 telling me that the carburetor was gummed up from bad fuel. They blamed it on the small amount of fuel I added to top off the tank that contained the fuel they had added after cleaning out the fuel tank. Since I was not able to start the blower, the only way the carburetor could become gummed up, was when they started the engine after refueling it in their shop at the time they did the work 11/21/2018. They insisted that it was my "bad" gasoline that gummed up the carburetor. When I took it back on 1/15/2019 and told them that I couldn't get it started after paying $151 for the November service, the person who checked it in told me that he gave me my one allowed complaint and he didn't want to hear anything else about their service. Quite unprofessional handling of the situation. I have used their very poor service for the first and last time.

Description of Work
Toro Snowblower would not start

Very well. The work was accomplished quickly. I appreciated their professionalism, and will continue to use them.

Description of Work
Annual winter service and checkup for an 8-year old mower, including replacement of one broken part.

Thank you ! We appreciate your business
5.0

Dropped it off and a few days later they called and said it was done. Worked well so far.

The service is still in progress. Later in the week, my snow thrower will be delivered back to me. I am impressed with the owner's service thus far.

Description of Work
My only contact with them was e-mail on Sunday, December 31, which was a non-business day for them. As of today, Jauary 1, I have not been contacted, and I anticipated that following the holiday. Please send me another review format later this week. Thank you.

Thank you for your business
1.0

It was a horrible experience. Tried to turn it on three weeks later and even though it would start, it would kick off quickly and was throwing out white smoke. I checked the oil and it was completely dry. It had oil in it when it was brought to the shop so they had to have drained it. We added the oil and now it starts but it still won't continue to run so that we can move it forward. When I called to talk to the guy he talked over me and then got upset when I tried to get a word in. He was very unprofessional and does not have a clue how to handle his customers. I felt they took advantage of an elderly woman that didn't know anything about engines and brought it back to me in worse shape.

Description of Work
I needed my riding mower fixed. It wasn't turning on. They gave me a rebuilt starter. I paid three hundred dollars for the starter and bringing my mower back to my house.

This work was completed on 4/24/2017 not 5/26/2017. We only installed a used starter and solenoid on her tractor. The starter cost $75.00 ( we could have sold her a new one ) not $300.00. The total invoice cost with tax and pick up and delivery was $259.81. Also this customer was quoted more needed repairs but declined them. Not sure how we took advantage of her when she authorized all repairs? If the mower turns over then the installed starter is working. We did not complete any oil change or any other repairs other than the starter and solenoid. This [Member Information Removed] is stored outside which is less than good for the tractor. Not sure how we did anything incorrectly with this customer or repair. Jericho Mower Service would not have an A rating if we had a habit or taking advantage of anyone. We believe this customer is upset because she spent money on her tractor and it still needs repairs as we had originally quoted. According to the customers own account above what repairs we completed are working as they should.
5.0

Great and I will take the mower back for a tune up at the end f the year.

Description of Work
Just needed a mower blade sharpened and they gladly did the work on the spot. Other shops wanted me to leave the blade for a week because it is a very busy time of the year.

As usual, Jericho was fantastic! We were gifted a 5-year-old lawn mower that needed to be serviced and maintained. They contacted us before they did any work, to ensure we were OK with the price quoted. And gave their honest recommendations on how to proceed with the work. We will continue to go back to them every time.

It was terrible. They came and picked it up in February. It took them 5 weeks to get it completed. I didn't get it back until April 7. After I got it back, it worked twice, then it wouldn't start anymore. I called them and told them it wouldn't start and they said it should be working and I told them it isn't. Come to find out it didn't have drop of oil in it. I put oil in and it started, but the next week it stopped working again. I called them back and they said they would come and get it, but it would cost another pick up charge of $80. I told them no, you took this lawn mower when it was working fine before and now it wont start. They agreed to come and get it and took it back to their shop. They told me they couldn't find anything wrong with it, and that it started for them. When they brought it back, the tech went to set the break and it started making a funny noise and started vibrating badly. Even the man said oh, that doesn't sound good. I asked if he was a repairman and he said that he just picks up delivers. I asked him to take it back and he said he can't do that without permission from the office. The next week I called them back and told them it wouldn't start yet again, and that I had put a new battery in because the battery was dead and let them know it started making that terrible noise again. Their response was that it didn't make that noise when they had it, so they had no reason to come and get it but said they would send someone out to come back to look at it. At this point I had already spent $455, which is a hefty price when they just needed to service it. I asked to speak to the owner about my endless issues with my lawn mower and his exact words were "I can't take this anymore, I can't talk to you about this" and hung up on me. At this point I had to deal with another guy, Joe, and he told me that they've been getting a lot of complaints about the owner, that he has no people skills and can't handle the complaints. At this point, I decided to get a second opinion. The other company told me that I was overcharged and shouldn't have paid that much. They also told me that there are 2 pulleys and that one of the belts was almost torn all the way through and the other one was about to break. Because of this, it caused a bearing to go bad. They quoted me $366 to repair the work that Jericho Mower Service should have caught the first time! They also should've checked the battery, because they charged me $25 for checking, but the battery was dead! I now have spent around $900 to get this issue resolved and am having trouble getting Jericho to reimburse me for the repair I had to have done since they missed the issues. They told me that they would not pay for any of that and that I should've come to them for the repairs. I told him they had two chances to fix it and that I got a second opinion from a reputable company around here and that they said you should've caught this. I have spent so much money to have my mower fixed because Jericho Mower Service dropped the ball on this.

Description of Work
I hired them to service my riding lawn mower.

Problem: unit was very difficult to start, but ran well once started. Jericho fixed the starting problem (2-3 pulls now), complete tune-up, throttle adjustment, cleaned, etc. Unit was returned very clean, in like-new condition, and it has never run better. Total cost: $260.00 = $180.00 for tune-up; $80.00 pickup/delivery (which is optional). The guys at Jericho were great to work with - friendly and professional. Frankly, with the pickup and delivery service, the entire process was completely painless. I recommend them.

Insured
All statements concerning insurance, licenses, and bonds are informational only, and are self-reported. Since insurance, licenses and bonds can expire and can be cancelled, homeowners should always check such information for themselves.To find more licensing information for your state, visit our Find Licensing Requirements page.
General Information
Free Estimates
Yes
Eco-Friendly Accreditations
No
Payment Options
MasterCard, Check, Visa, Financing Available
Senior Discount
No
Warranties
Yes

JERICHO MOWER SERVICE is currently rated 4.7 overall out of 5.

No, JERICHO MOWER SERVICE does not offer eco-friendly accreditations.

No, JERICHO MOWER SERVICE does not offer a senior discount.