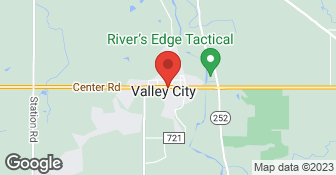 Pro-Cut Landscape Development has been designing, installing and maintaining beautiful landscapes in Cuyahoga, Lorain and Medina Counties since 1991. We have the knowledge, expertise and capabilities to complete most, if not all of your landscaping needs. We know that when choosing a Landscape Service Company, the higher your standards are set, the shorter your list of options becomes. At Pro-Cut Landscape Development, we strive to be the last company on your list after all others have been eliminated. After all your image is also our image!!!!! Additional Fax - (330) 723-1365. Additional email - sales@procutlandscapes.com. Additional DBA - Pro-Cut Maintenance & Design Inc....

8% off - Mulch Delivery and Installation Up to 5 Cubic Yards…

Up to 4 Hours of Leaf Clean-Up…

Up to 8 Hours of Leaf Clean-Up…

Terrible company. DO NOT HIRE. I started working with Pro-Cut in September of 2019. The job was to kill my existing lawn, remove stump grindings from stumps I had ground up, till it up, run a rockhound to remove any stones and debris, grade towards my swale and creek, then re-seed entire lawn and install mulch beds. Initially Mike was good to deal with but things quickly went south. I was at work and my wife called me to tell me that they were tilling the stump grindings into the soil. She went out to talk to the guy on the tractor and he argued with her and told her “we do this all the time”. I had to call his boss and remind him that removing the stump grindings was part of the contract. Anyone who knows how this works will tell you that stump grindings will adversely affect the pH of the soil and grass won’t grow. He reluctantly agreed and removed the grindings. They tilled the rest of the lawn and re-seeded but never graded the lawn. They never used a transit, laser level or anything (also discussed in our initial meeting) to ensure proper grade. I had low spots before and didn’t want to have the same problem again. I couldn’t tell that they didn’t grade it because the entire lawn was covered in straw. Mike assured me it was graded properly. They did my mulch beds but laid the mulch up to 6” thick in many areas which has caused mold and I can’t plant anything there unless I add 3-4” of soil. They also covered my downspouts where they tie into the storm drain so my storm drains are full of mulch. The lawn started to come in in October but never came in quite right. Mike came back and overseeded but it didn’t help. I decided to purchase my own seed (same exact Lesco brand they used) and spent $150 to try to help fill in the bare spots. During our initial meeting, I told Mike that my lawn had several areas where grass wasn’t growing and I wasn’t sure why but I suspected I had clay in the soil. He said they would add soil as necessary. They didn’t bring one wheelbarrow of soil. I decided to wait until Spring and see how it looked. Well, it looked awful –worse than it had before I even hired them. There were bare spots everywhere and I had standing water in many spots. It became a mud pit. I emailed Mike pictures and he responded and said as soon as weather allowed they would come back and take care of it. He didn’t send a crew out until June 3. By then it was hot and we missed the last of the Spring rains. He could’ve come out in early May but since they already had my money I could tell they had no interest in coming out unless I kept asking them to. I told Mike that he should come out with at least 20 yards of soil due to the excessive low and bare spots. He ignored my advice and came with 3 yards. His crew even agreed that adding seed and soil wasn’t going to fix my problem because it wasn’t done properly in the first place. After asking his foreman 4 times when Mike was going to come out he finally showed up. While walking the lawn with him, he kept deflecting my questions and concerns. I looked him in the eye and asked him if he really thought that throwing down some soil and seed was going the fix my problem. He looked down at the ground and responded “yes I do”. He wouldn’t even look me in the eye and say it because he knew it wasn’t the proper way to repair my lawn. I have tried to be as patient as possible with this company and give his idea a chance. I diligently watered my lawn (again with super high water bills like I had in the Fall) every day and mowed around the straw that was all over my lawn. The grass never came in and I still have excessive low spots. I requested a refund and asked him to make it right and now he won’t respond to me. My lawn looks worse than it did last Summer. I have photos to back everything up. Do not hire these guys. I went with them because Mike seemed genuine at first and gave me a good price. I won’t make that mistake again. Next step is to hire an attorney.

Mike and his crew did an excellent job. They arrived on time and completed the work, and cleaned up everything. I will definitely being using them again.

They missed spots all over and left a bunch of deep tire tracks in my backyard. Terrible job.

Overall went well. Little delayed application but due to weather and understandable. Remember to be flexible as early to mid spring does not allow for many sunny days which I am sure backs things up. Overall crew was quick and thorough. Cleaned up after as well.

Description of Work
Put down about 10 yards of mulch

At First, Mike was awesome and he informed me he would be at my house on Thursday 1/2/2020 to perform the job. On Thursday I waited all day at the house till 4:30pm. I called his cell phone twice and the companies phone and received no answer. They never showed up. On Friday I called again and received no call back from Mike or the company. I wasted an entire day off waiting for them to perform the job or at least call to tell me they had to reschedule. This was absolutely terrible. Would never recommend.

Description of Work
I called Pro Cut landscape and talked to Mike about us needing leaf removal and also a quote on weekly lawn service.

I knew my husband and I would not be renewing our arrangement with Pro-Cut when, several weeks into our biweekly lawn services, Mike stopped returning my phone calls. He did not even send a brief text message in response to my queries. Very rude and unprofessional. Things then got worse. Hedge trimming was done incorrectly or not at all, and the lawn mowing was done in a very shoddy manner. The last time they mowed our lawn they sheared the grass down to the dirt. Mike actually deigned to send me a text message saying he would take a look at the lawn and get back to me. I don't know if he ever came to look at the lawn but I do know he did not get back to me. They then stopped doing anything to the lawn, ending our arrangement without notifying me. They did not finish out the summer. I will always recommend people not use Pro-Cut.

Absolutely great service. Mike came out and reviewed the work we needed, gave us great recommendations, and better/more permanent fix recommendations for our backyard draining issue, instead of recommending the other method other companies recommended that would only have addressed the issue for a year or two until the tree roots pushed up the soil again. They provided quick/excellent response times, and were able to start the work pretty quickly from the time we signed off on the quote. They did an excellent job, and we are really happy with their work. Have had some really hard rains, and the backyard drainage is SO MUCH BETTER. Thanks, guys!

Despite telling them to arrive at 10 am, they arrived at 9 am. Not a big issue, but we had to leave and come back. Although they did a lot of work, the quality could have been better. We are going to have to still hire someone else to make our yard presentable.

The service is excellent, timely and courteous. Mike is a great guy and they are extremely professional. I always place the order with Procut each year. However, here was the small discrepancy this time. The deal offer says 3-inch mulch will be installed, the invoice says 1 1/2- 2 inches but what was finally laid out was 1 - 1 1/2 inches. So, it was half the offer; perhaps there was an unintentional disconnect between the office and those who installed the mulch. I would be glad if it is 2 inches uniform. Nevertheless, I will still strongly recommend them. They are really good.