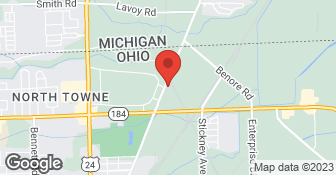 Everything went smoothly and work was performed as requested.

Bob came out quite quickly, pried the door open-not easily done as it's a huge heavy door-so I could get my car out. Part had to be ordered but only took one full day to arrive. Bob was extremely polite, professional, and respectful of my property.

Same day service, courteous and professional. Even checked and lubed the second garage door as a courtesy! We've used Overhead before and we will use them again !!

very good,on time ,did the work

I was not on site when the installers arrived and installed the doors (I was at work). Upon my arrival home, I noticed a number of issues that needed to be addressed. No big deal, as I understand things sometimes need to be tweaked. But it was the follow-up communication, attitude, and (dis)service that took the cake. 1. Significant gaps existed between the door seals and the doors. Wind was howling between the doors and the seals on all sides and top on all doors. What's the point in spending $2,100 for three R-17 insulated garage doors when wind could simply pass by them? 2. Door tracks were so close to the unfinished ceiling that, if standard rail garage door openers were installed, the doors would hit the trolley track. Therefore, I would have to use a jackshaft-style garage door opener. While I don't have an issue with this, what I did have an issue with was that the torsion tube (around which the large torsion springs are coiled) were NOT centered. I'm not talking about the spring - I'm talking about the torsion tube. There was absolutely NO length of the torsion tube extending beyond the cable drums. This is where a jackshaft opener connects to. I spoke with and quot;Billand quot; at OHD of Toledo. He was courteous and pleasant to talk to. He told me I would receive a call back from someone in charge of the installers. Someone by the name of and quot;Jasonand quot; called me back. Quite frankly, Jason was one of THE MOST UNPLEASANT AND ILL-MANNERED PERSONS I've dealt with in a customer service capacity. His tone and attitude were very poor AND he repeated told me that he would NOT change a shaft even if the shafts they used will not accomodate a jackshaft garage door opener. He said I was SOL if I can't install openers because HE'S NOT RE-HANGING A DOOR!! Therefore, I can not and will not recommend Overhead Door of Toledo. The *sole* reason is 'Jason' and his absolutely unacceptable attitude and lack of attention to CUSTOMER service.

Description of Work
They repaired my garage door opener.

In reviewing the sequence of visits and repairs made to the customer's garage door I would like to provide some clarity as to the events that required the repeat visits. The first visit we made to the home we replaced a broken spring on the garage door (first problem). The spring on a garage door is the piece of equipment on the door that makes the door capable of being lifted manually as it assists in countering the dead weight of the door. When we left all was working as designed. We were called back about two weeks later for a garage door opener issue and was told that the motor was just humming. Upon arrival at the home we found the operator chain all bound up so we repaired as needed at no charge and upon departing the operator was working as designed. Three days later we were called out again for the same problem at which point we found that the operator's gear kit inside the operator head (made of plastic) was chewed up and required replacement. In short, the spring breaking made the door heavier as it was no longer counterbalanced which put extra pressure and strain on the plastic gear kit in the operator. I can only assume that the gears were materially worn at the time of the first visit, but not bad enough to cause operational issues and indicate a need to replace. I agree that a more thorough review of the garage door opener on the second visit would likely have uncovered the need to replace the gear kit and we take responsibility and apologize for the extra visit that was required to finally identify and repair (second problem). In short, there were two separate and distinct problems with this garage door system, one with the door (broken spring) and the other with the operator (damaged gear kit). There was no charge for our second visit, and for the third visit where we identified and replaced the gear kit only half our normal labor cost was charged in an effort to compensate the customer for the repeat visit and aggrevation. I have spoken with our service crews and instructed them to inspect operator gear kits on this brand of operator going forward when on projects to replace springs so as to be more proactive in avoiding call backs. I have also instructed them to communicate more clearly the issues they are encountering so that the customer can be more aware of the repairs being made and why they are required. Thank you for your feedback.
4.0

Service was performed within 2 days of our initial phone call. Service was thorough, professional and speedy. Great job!

Description of Work
Top notch. Gave the opener a tune-up and replaced the broken spring .

Description of Work
Had a broken garage door opener that needed repaired however it was too old to be repaired. They took half of the service call cost and put it toward the purchase of a new opener which I thought was great. So far it is working great, the installer was friendly and professional, no complaints so far!!!

The original charge was $99; however, there was more work to be done, so he did the work and I paid him an additional $65.

Description of Work
Replaced a broken coil and bearing.

He completely removes everything and does the work. We don't even have to supervise or anything. He is very good and very pleasant. He was a better price than most of the people. His price is very reasonable. He was comfortable enough to talk but not too long. He said all the right things, he told us things we need to do and then he gave us a guarantee which said we can call any time if we have any problems.

I did not choose Overhead Door. Price was in line with the others but I just preferred another company after speaking with a few.

Description of Work
I read through the reviews and after receiving quotes from some of the garage door companies I chose Terry's Garage Door. Overhead people were fine on the phone but I preferred Terry's and was willing to pay a few dollars more.

Well. They were out the next day, explained everything and it cost less than what I was anticipating based on what a friend said it cost her to have the same thing done. No complaints whatsoever

The work was very nice. They were in the ballpark with other bids I received. They have another office in Sundusky. They do doors, fireplaces, windows, and roofing as well. Overall, it was a good experience.

Description of Work
They installed the garage door for me at my house.

We called our insurance company when our old garage door opener broke. They referred us to Overhead Door of Toledo. We were able to schedule them to come out and replace our garage door opener the same day. The technician arrived on time, was professional, and did quality work.

Install and repair all makes and models of garage doors and opener's. we service all of michigan and toledo ohio for over 20 years where we do it right the first time.  …

Established in 2013 At Detroit City Sweep, we strive to exceed the expectations of each and every customer. We do that by using the highest quality products and through our attention to detail. You'll notice the difference immediately when you choose us to handle your chimney maintenance and masonry needs. Hiring a high-quality chimney and masonry specialist is an important decision and we'll provide you with outstanding service. We always offer Free Estimates. Free Video Inspections upon request with purchase of a cleaning. Low cost, no mess, chimney cleanings & inspections. Additional website: www.chimneycleaningdetroit.com  …

Integrity Home Exteriors is your single source for high-quality roofing, windows, insulation, doors, siding and gutters services in Northwest Ohio and Southeast Michigan. Started by Adam Becker in 2000, Integrity has grown into a full-service residential, commercial and industrial exteriors contractor for all your installation, repair and maintenance needs.  …

How is Overhead Door overall rated?

Overhead Door is currently rated 4.6 overall out of 5.

What days are Overhead Door open?

No, Overhead Door does not offer eco-friendly accreditations.

No, Overhead Door does not offer a senior discount.

Are warranties offered by Overhead Door?

No, Overhead Door does not offer warranties.

What services does Overhead Door offer?