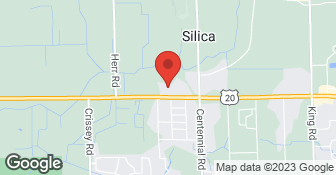 The estimator came on time and provided an estimate of the cost as well as an estimate of the time it would take to complete the work. He told us that they will fill cracks into which a credit card would fit and that the smaller cracks might increase in size when the surface was ground. His estimate was for the grinding, filling two cracks and polishing at the end. He also asked us to complete a credit card form so that they could charge the 50% that they required up front. We completed this and returned the form. Then they gave us a date and time when they would come to do the work. On that morning we waited and waited and they didn't come. When I called, I was told that they had to re-schedule and did no apologize for not informing us or not coming. On the second date, the man who came to do the actual work ,looked at the job and said immediately that it would take much longer than the one and a half days that the estimator had told us. It actually took two days. We were at home the entire time and told both the worker and the estimator that we would be available to answer any questions. At no time did either of them consult us when a decision needed to be made. At the end of the third day, I looked at the patio as the worker was finishing up and saw that the smaller cracks had indeed opened up and that they had not filled them. The cracks that they had filled were filled with two different materials that were entirely different colors. In addition, they had to remove two small cement supports for an awning and they had filled one and not the other. When I asked why the smaller cracks had not been filled, the worker said that he had asked the estimator, instead of asking us, and the estimator had told him not to fill them because it was not in the contract. In fact, there was no signed contract. In addition, the estimate had included a fee for coming out and setting up. When I called the estimator to question this decision, he repeated, that the smaller cracks were not in the contract. When I spoke with his manager, he repeated the same statement. At this point they had not charged the 50% deposit and I closed that credit card, so that they could not charge the full amount. I also informed them that I had done this and that they would need a new authorization to charge anything. We corresponded by email with the manager and said we wanted them to return to fill in the additional cracks and the second support, and we didn't expect to pay the set-up fee. We also wanted to remove the dark green filler and replace it with a filler that was a closer color match. To show our good faith, we made a partial payment by check. A second worker was sent out to do the work this time. Although we chose the color of the filler from an email attachment, it also did not match the other filler. In the process we learned the name of the product they were using and the supplier that they used. When we called the supplier and the manufacturer of the product, we learned that this product is not made for outdoor use!!! When we tried to address this problem with the manager, he quickly became hostile and denied that the product was not for outdoor use. We made another partial payment, but the manager demanded the full amount. He also threatened to put a lien on our house for the remainder that was due for the shoddy work they had done. When we told him how we had learned that this was not an appropriate product for our patio, we never heard form him again. At no time did he apologize for the lousy job and his treatment of us. We have owned three homes over the course of over 40 years and have never been treated this way by any other contractor. We have hired plumbers, remodelers, carpenters, roofers, painters and more. Under no circumstances would I recommend this company again. Ohio (Michigan) Concrete has no concept of the meaning of customer service. They tried to bully us. It was a horrible ordeal.

Description of Work
We hired this company, which also goes by the name of Michigan Concrete, to grind down our patio and fill the cracks.

Description of Work
They milled a 15-foot wide crown between my concrete driveway apron and sidewalk so that my "low-slung" auto could pass without scraping bottom. I had hoped that this would result in a smooth finish, but that did not occur. | |It went well, but took longer than either of us had originally anticipated. That caused the price to rise per our agreement.

We had botched a do-it-yourself repair job on the cracks in our basement floor. We had no idea how to remedy the situation, so we called Ohio Concrete Sawing to have them come out and fix our mistakes. Doug spent 15 minutes with me on the phone explaining exactly how I could fix the problem myself for far less than he would have charged me. I will definitely recommend this company simply because they were so honest and helpful, even though we were not paying them any money. Thank you, Doug, for your help!

My experience with them went all right. His bid was a little high and at that time we were leaving town, we were going south. He said: "It was too cold to do this concrete thing", so we put off until now and we haven't gotten in touch with him as of yet because there was going to be a part of the garage edge that water comes in, and it turned out that we had a fire in the garage. So, they are repairing things still and that was on February. So, we haven't called anybody to do that yet. We think that the quote was a little high. So, my husband called them back to speak with them and see if he can come down a little more. Well, he might be able to adapt with using a little lesser grade concrete with a little change in this and that and my husband is going to help out to make the price to $400, and he said possible and we would find out in the spring. He seems very nice, we didn't talk very long, but he just seem like a very nice person and honest. I think he was the person in charge of probably his business. So, he did the quote right then and he seemed very knowledgeable anyway, but when we did talk to him on the phone again he was looking at his papers and he said could possibly come down. So, that was about it.

Description of Work
Ohio Concrete Sawing & Drilling Inc. quoted me for a 12 inch area; and as wide as the garage (for a single car garage), lets say 14 feet across or something.

I give them top grades in everything.

Description of Work
I used Ohio Concrete Sawing & Drilling Inc. I last used their services I think about a month ago. They drilled a hole for a furnace exhaust.

At first, we intended to drill and break apart the concrete ourselves when we thought the slab was 4 inches thich. When we drilled our first few holes and found the slab to be 10 inches thick we called in the experts and they made it look very easy. They cut up about 10 square feet of the bathroom floor so that we could get to the plumbing, move the toilet, and add a tub.

The gentleman that worked at our house was in and out very quickly. He did a very good job. This job was very messy and he did clean up after he was finished. We were very please with his work.

Description of Work
They saw cut our existing foundation wall of our basement so that a new entrance could be added from our new addition.

Here at Real Deal Remodeling we are a locally owned and operated company, that values honesty, integrity, and treats your home as if it were our own. We offer a wide variety of quality home improvement services. You will find us to be competitively priced with close attention to the details of each and every project that we are involved with. We look forward to building lasting relationships and guarantee your personal satisfaction.  …

Concrete pouring but will subcontract with removal

No, Ohio Concrete Sawing & Drilling Inc does not offer a senior discount.

Are there any services Ohio Concrete Sawing & Drilling Inc does not offer?

Concrete pouring but will subcontract with removal