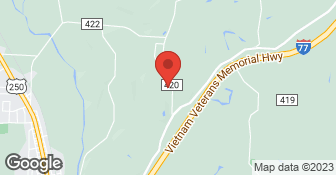 They are all satisfied. That's why I will use him in the future.

Description of Work
Hasn't done any work yet. Has done several neighbors.

Description of Work
Installed an Airease 2 1/2 ton heat pump and air handler with air cleaner. Very professional and on time. Removed the old unit and cleaned everything up. We will use his services again and have referred him to others.

I got Keith's name from a list of contractors in the plumbing department at my local Menard's. I needed to have someone install a new 50 gallon gas water heater in a rental property that I had recently purchased. I contacted Keith via telephone, told him what I needed done, and he quoted a ball-park price and agreed to get the work done at the beginning of the following week. Keith showed up on time with 2 of his employees to assess the situation first hand. He gave some instructions to his employees and they did the work while Keith made some estimating calls in the area. He kept in touch with his employees by telephone while he was gone. He returned to inspect the work after the employees were finished. While the 2 employees were waiting for Keith to return, they gave my gas, forced-air furnace a minor tune-up and didn't even charge me for it. These employees were friendly, courteous and professional. My wife came over and met them, and like them. After Keith returned, I also asked him to look at a kitchen sink garbage disposal that I couldn't seem to get to work. Keith figured out that it was not operated by a wall switch, but with a drainer cover that you had to slightly lift up and turn to activate the disposal (kind of a saftey feature of older style garbage disposals). I was so impressed by Keith and his employees that I later contacted him about remodeling the upstairs bathroom of our house. That will be in a later review.

Description of Work
Installation of a new 50 gallon gas water heater that I had purchased at Menard's. Note: I had already drained the old water heater.

It went well. They did a really nice job especially with new register in the kitchen.. They had really good communication, worked quickly and got done in one day.

Description of Work
They rerouted 3 heating ducts back to original registers in our old house. Added a heating duct in the kitchen where there hadn't been one since remodeled last.

We had used Fry to repair our old furnance in 2011 so had them quote replacing the furnace and AC. Their quote was very competitive. The crew was prompt and professional. Had the AC running on the first day and came back a second day to make final adjustments to the furnace. They cleaned up after removing the old equipment. Were very happy with their service!

The entire remodeling went wonderful. They clean up everyday. Their workers didn’t argue, and complain; they worked so well together. The manager/owner came by to inspect their work. They got the work done exactly when they said they would. The estimate was right on.

Description of Work
Fry Heating & Cooling tore down a wall, built another wall, and put up dry a wall. They put down new sub flooring. Did the entire tore down, put in a shower tub, surround all the plumbing, and re-braced my floor from underneath the basement.

The company which is ran by husband and wife returned every phone call, made appointments to meet and plan WITH me the project for my bathroom. Had ideas to still get the effect without spending a lot of money, and honest as to where money should and needed to be spent, but never pushy. Every appointment and phone call was delt with by the owners. I described what I wanted done, he was right on with the estimate. He didn't ask for a budget until I brought it up, he wasn't trying to find out what he could get out of me. His time line for the project was right on also. The men in the company were so professional, on time every day, worked through the job, never saw one of them taking a break other than lunch. They all worked so well together, if there was a problem I was unware of it. The only problem I was made aware of was a broken tub and I only noticed when another tub showed up that same day(the work just flowed nicely). While the men were working the owner was only a phone call away being able to run and get whatever the workers needed. The owner came to supervise the work a few times and then at the end. The workers cleaned up every evening, professional, polite, and personable(even joked with my kids). The owner Keith has the respect of his workers, the persona of a leader with the ability to hire compentant and independent workers. Just call for an estimate and you won't regret keeping his number around for your next project.

Description of Work
This company expanded my bathroom, moving a wall, rebracing the floor underneith from within the basement, repaired and moved the plumbing, replaced the subflooring, installed a tub/shower surround drain faucets and replaced the existing drywall including the ceiling, installed a shower light and did electrical work. Did the demolition and removed all waste.

Professional installation of Replacement windows, Entry doors and Storm doors. We guarantee your satisfaction and we won’t leave until the job is done right. We pride ourselves on the quality work we provide, while delivering great customer service! Check out our services offered and call or click to schedule a free estimate today. www.Facebook.com/wengerwindows  …

Roofing: Shingle And Metal Roofing Call now for a free no obligation estimate/Inspection. One of the few company's still in the business since 1967. We carry a A++ on the BBB! Financing available and Payment is not collected until the job is complete and you are HAPPY!  …

Fry Heating & Cooling is currently rated 5 overall out of 5.

Are there any services Fry Heating & Cooling does not offer?