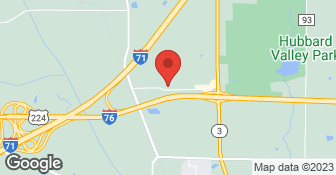 Blue Men Moving LLC is a locally owned and operated moving company. Our company goal is to provide the best possible moving experience for our customers....

Blue Man Movers did an outstanding job of moving our entire house contents. The cost was consistent with estimate. Crew was very polite and treated our belongings as their own. I would recommend for any moving job.

Thank you for allowing us to do your move and the kind review!
1.0

(23-JUL-2021) We've used Blue Man multiple times in the past (and you can read excellent reviews from me) and they've always done a great service for us...until now. I had them pack my trailer for a relocate to Florida and they didn't take into account what was in the boxes or how it was packed. They sent 2 men to pack the trailer. The "main packer" did not take instruction and packed the trailer as he saw fit. His name was Dylan. His helper, Jordan, was pleasant and accommodating. However, Dylan ignored the packing instructions. Power tools were packed on top of dishes, they packed propane tanks that weren't secure and caused major damage to my HD 2017 CVO motorcycle and they claimed that once the door was closed on my trailer, that they were no longer responsible at that point. They offered some reimbursement of the overall charge, but that doesn't even cover a fraction of what it's going to cost to fix my motorcycle. They packed my desk on top of my grill and caused damage to both my grill and my desk. The desk I also have to replace as it cannot be repaired. I have spoken with the owner, Seth Arnold, on multiple occasions and used this company for all of my moves. I need both hands and feet to count the times I have used them. I have referred them to family and friends as well. Today, I am ashamed of the treatment I received by Seth and Blue Men Moving!! After the way I have been treated as a longtime customer and referral source, I can tell you without any reservation that I will NEVER use them nor refer them to another soul EVER! You can see in the one picture how they packed things around my bike when they were finished and the damage it caused when I opened it back up at my final destination. We will have to repack the entire trailer in order to safely store it while looking for a permanent home. This damage is just the beginning of what we have found so far... **UPDATE** (28-JUL-2021) Since arriving at its final destination, the trailer packed by Blue Men Moving, (owner Seth Arnold) is a complete disaster. Not only did their pack job do major damage to the HD motorcycle, but because of their carelessness we had to unpack the entire trailer and then repack everything correctly, to ensure that the contents could be examined before going into storage while house hunting . What we found was astonishing and shameful. The boxes were packed with the fragile, lightweight boxes on the bottom and heavier power tools on top. EVERY box had a white label that demarcated what was in the box and arrows indicating how the box needed to be packed. Either the “Master Packer” as Dylan called himself could not read or they just did not care to pay attention to the labels/instructions. Boxes were crushed under the weight of the tools. The custom-made glass panels for the gun cabinet were shattered because they packed items on top of them. They did not secure anything, and the cargo shifted and came toppling out when the door opened almost hitting one us. Here’s the important part! When I called Seth and told him what had happened is response was “our responsibility ends when everything is loaded, the door shuts, and you drive away.” If that is the case, then why do they tell you that they are bonded and insured? Why do they offer a service that they do not stand behind? Clearly, they do not trust their employees to do a good job. Good enough to ensure that your belongings are going to be packed with the utmost care; and they can ensure everything will be in one piece by the time that it reaches its final destination. Is that not false advertisement? If you are providing a service that you cannot or will not stand behind 100% - THEN DO NOT OFFER THOSE SERVICES!! Seth did not remedy anything. He took some money off the initial packing bill and that was it. He did not care that he lost a longtime customer and referral source. He did not care that our possessions were damaged and were going to cost way more than the pittance he was offering to give back on the bill. So, my advice to you is BEWARE. I never expected this type of treatment after being a longtime customer, but that just goes to show you that you can’t trust anyone and the dollar is more powerful than customer relations.

Description of Work
Packing a trailer for moving

Working with Blue Men Moving was a great experience. Their entire team from the front office to the men who packed and moved our belongings were fantastic. Always responsive to answer questions, giving us a great price for their services, handling every piece of our belongings with care. I cannot say enough wonderful things about them. I would highly recommend them to anyone looking for professional, caring, expert help in moving. My heartfelt thanks to them for their support of my move.

Description of Work
Blue Men moved me twice in one year.

It was great. They were professional, helpful and it all went very well!

Description of Work
We moved from a 3rd floor apt to a townhouse in Columbus.

[Member Name Removed], Thank you for the kind review and thank you for using us for your move.
5.0

I have used many movers in the past and this one by far has been the best. Jordan and KC out of the Seville location were awesome! I had several heavy pieces of furniture that were moved down a narrow a staircase and they did a fantastic job. They arrived on time and were very courteous and communicated well with each other throughout the move. Would definitely hire them again for our next move.

Terah and Garrison were the most professional movers I have ever hired! Would use this company again for sure! Unlike the last company I used these guys were hard workers and never took a break the whole time they were working. ⭐️⭐️⭐️⭐️⭐️

Description of Work
Moving big pieces of furniture and appliances

Please be careful hiring. After the move was over, I quickly found out that my much needed pain medication, that was in a non labeled bottle had gone missing. This one mover in particular kept having to use the bathroom an unbelievable amount of times, and seemed a bit off. There was only myself, my spouse, my Adult daughter and movers. My daughter had followed two of the three movers out to get a business card for herself and over heard the one guy offer the other mover something, but she thought they were his, until I mentioned I was missing medication. We called the owner who did express concern, stated that there had been an issue with one employee in past but he thought things had been straightened out. I guess not! He offered to compensate for the cost, but that does or means nothing as I had just only picked up my prescription a day before and now would be suffering and in very extreme intense pain for the next 27 days, as you can not get it replaced. I have many very serious medical issues which I rather not disclose at this time, but it will be extremely difficult to tolerate the pain without this medication. Please don't hire these movers. They apparently are aware they have drug problem employees who know what kind of pills to look for and steal, as these were mixed in with other medications and not labeled, tucked away in the kitchen, only out of my site for a very short time, but with three guys wondering around and asking where to set boxes, I had to leave the room a few minutes. Please be aware, drug addicts apparently will always find and steal. They know what to look for, I would be concerned that valuables could get "lost" or "stolen.

I am TOTALLY happy with Blue Men Moving in every category. They were professional, hard working, courteous, personable, careful and answered all of our questions. Their cost was reasonable for what they did (packed also) We have recommended them to many people. We would use them again.

Description of Work
Move to North Canton from suburban Akron

These guys were amazing! Very professional and friendly. Went above and beyond! We received 3 quotes from our area. The difference was ridiculous! Blue Men was by far (1000’s of dollars) lower. They were punctual and very professional. They worked very well together! Great group of guys!

Description of Work
Moving across 4 states

The Blue Men movers were terrific! My mom needed help rearranging furniture within the house and getting rid of some things, so I called Blue Men for a quote. I left a message and they called me back within 2 hours. They provided details of logistics, scheduling and pricing, and they did not require a detailed list of items to be moved (allowing us to give more thought to this prior to the move date). They told me exactly what time they would arrive and how long they thought the job would take. Two very professional, prompt, friendly young men arrived right on time, explained the process, and got to work. They moved heavy furniture up and down stairs, rearranged, and carried many, many items from the basement and the back yard to their truck. They were very careful and conscientious. We changed our minds a couple times about which items were staying, going to the dump, and moving within the house, and they were happy to accommodate. I have worked with movers many times and would recommend Blue Men Moving to anyone!

Description of Work
Blue Men moved a LOT of furniture within the house and even more furniture and "stuff" from the basement to their truck to take to the dump.

Blue Men Moving LLC is currently rated 4.8 overall out of 5.

No, Blue Men Moving LLC does not offer a senior discount.

No, Blue Men Moving LLC does not offer warranties.