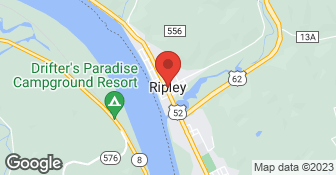 All types of roofing and general construction.

Mr. Brierly personally inspected the project, went over recommendations with me, and performed the work quickly, efficiently, effectively and for a very fair price. The finished product far exceeded my expectations. A follow-up call was received to assure we were satisfied with the work. Great work ethic and professionalism. A model business. Would definitely hire again and recommend to anyone. P.S. They do more than roofing...ask.

Description of Work
Had several moderate roofing and guttering repairs performed, mostly to correct improper work done by another contractor.

They arrived and spent about a half a day making repairs. The next day, they sent another crew of younger workers who were only there for about twenty minutes, put a ladder up, and then left. They have never returned to finish their work, and when I have called to inquire, I have been treated unprofessionally and rudely. I am concerned about these leaks, as they are causing water damage to a wooden ramp. We have paid them for the work already, but it was not done correctly, and they are refusing to repair it.

Description of Work
We contracted this company to do some gutter repairs for our home.

I am terribly sorry for the delayed response as we have not logged onto the Angie’s list website in quite some time. However, I would just like to make it clear that we have not ever had a crew of “younger workers” as you have described. The work performed was to temporarily repair that of which another company improperly installed, in which you were informed in the day of the original meeting would not be a final solution. As for being treated “rudely”, you, Mr. [Member Name Removed], never called our company in regards to this matter. Mrs. [Member Name Removed] called speaking of “you Americans” and proceeded to tell me how ignorant American people were, at which time she was told to find someone else to do the work and instructed to not call back.
3.0

They gave me an estimate $8,000 more than I ended up having the work done for. They seem to give me a higher estimate than necessary because I had a government loan to complete the work.

Just gave us outstanding work. Was so professional and just the roof is absolutely beautiful. He worked so hard to make sure the color was exactly what I wanted. They cleaned up after they left, no nails, or anything left that could puncture our tires. They followed up to make sure everything was okay. Just outstanding, the company was great!

Description of Work
They put on a whole new metal roof on our home and our pool house, down spouting and new gutters.

Description of Work
Initially they reroofed a house. Somewhat mixed communication, but when they did it, they did an excellent job. Since then I have used them for leaking chimney repair (different house), drywall repair, and gutters. Excellent work, conscientious, professional. I have additional work lined up for them.

Description of Work
Overall I am very happy with the job Donnie and his crew did. No fly by night operation here. No job is perfect and Donnie came back to fix a problem promptly and at no extra cost to me. Hire with confidence.

Description of Work
Sheet metal roof installed over existing asphalt shingles. Initial response was quick to inspect. Slow to submit proposal. 1 day late start job without a phone call. Actual work was done in 1 day with professional looking results. Contractor took the initiative to fix a few small extras with gutters and soffit vents at no additional cost. Excellent cleanup after the job was completed.

Very pleased with Donnie's work. In fact, I am having him prepare a new roof estimate as well.

Description of Work
Replaced all gutters and downspouts with new, larger ones with gutter guards. He saw a few things that needed repaired and took care of those as well.

Description of Work
I called him and he came out to figure out what was needed. I contacted my insurance company to find out what to do and they said to have him give me an estimate, turn it in and see what the insurance would pay for-- the rest would come out of my pocket. I have been calling him since 21OCT to get the estimate leaving messages with no return call. I called again tonight and apparently his cell is disconnected. Now I have to start this process all over with a new person. --sigh-- I'm not a happy camper.

Donnie was very helpful as he detailed several different scenarios for our roof and remodel. He is very personable and honest.

Great guy to hire! Was very honest and truthful about everything along the way. Very knowledgeable! And explained everything he was doing in great detail. Would recxomend to anyone and everyone. He put new shingles and our roof and even cleaned the gutters for us. He was very quick too. My roof looks great!

no problems, easy to work with fixed some small problems found along the way

In short, I will always use Brierly Roofing. Above all, they are 100% absolutely honest with you about every detail of the work. The workmanship is exemplary and the professionalism is outstanding. They were always on time and didn't leave until it was completely done -- no matter how late they had to stay. The prices were very reasonable. We found some issues on the roof as they were painting and I didn't hesitate to hire them to fix the roof. They took pictures, gave me several options, explained everything in detail and gave me several price quotes to consider. They were very clear on all the pros and cons of every decision that had to be made. They came a few weeks later and fixed what turned out to be a roof that really needed some attention. I should mention that I had my roof serviced by another company (not hired through Angie's List) less than a year ago and the other company didn't even bother to tell me about some serious issues that were very evident once I saw the pictures Brierly Roofing took. Brierly went far beyond the call of duty on many issues and even fixed some stuff free of charge that was badly done by the other company. I am not sure there is a single bad thing to say about this company. Use them !!!!!!!!!!

Description of Work
Brierly Roofing painted all the exterior of my house including the sheet metal on the roof and repaired all wood soffits. Replaced about 30 slate shingles on the roof. Put new cooper hip and ridge on the roof. Cleaned the gutters. Fixed all the wood holding the gutters. Put new downspouts all around the house. The $6000 was for materials and labor.

Ohio Basement Authority, founded in 2009, is a subsidiary of Groundworks, a family of companies that offers superior, proven solutions for your foundation repair, structural repair, crawl space encapsulation, dehumidification, and concrete leveling needs. They currently maintain offices in Cincinnati and Columbus. Ohio Basement Authority is a recognized accredited member of the Better Business Bureau and devotes its years of experience, industry knowledge and specialized training to help customers protect their homes or commercial buildings from water damage, concrete sinking, and foundation failure.  …

Insulate My Home is a residential insulation contractor. We provide materials and installation services for all types of home projects with a focus on affordability, quality, and customer service. Whether you’re buying a new home or updating your current house, we’re the experienced residential insulation contractors you can trust. We’ve insulated thousands of homes throughout Ohio & Western PA. Call or click for your FREE estimate today!  …

All construction, specializing in roofing and guttering.

Brierly Roofing LLC is currently rated 4.6 overall out of 5.