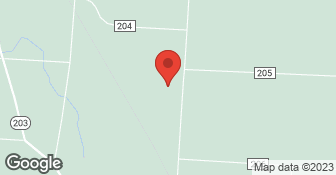 Central Ohio Retractable Screens use "Phantom" brand retractable screens for Front doors, Single entry doors,Double French doors, Windows, and Large motorized retractable screens for Porches, Patios and Garage Doors. Phantom Screens exists to positively impact and enrich the lives of our customers. We associate and pursue relationships with others who mutually respect, share and support our vision and values. Every one of our providers contributes to delivering the “Phantom Experience” to our customers. Central Ohio Retractable Screens is there when you need us, enhancing your lifestyle, making us your choice for retractable screen solutions. We do not subcontract and guarantee our workmanship. Phantom Screens offers lifetime warranties on the retractable mechanisms

It was a great experience Jim and Marilynn really worked around our schedule and every looks great and most importantly works great.

Description of Work
We had retractable screens put in

Wanted an easy to use screen door installed on the outside of a French door to my patio. Because of the configuration of my French door, a retractable screen door was the only style that would work. Called this company during the first week of August and was put on the schedule for the end of August. Was quoted a price over the phone ($469 plus tax) based on my description of my door. The two installers showed up on time and were friendly. It took them about an hour to cut the screen to fit on-site and install the door. They made sure to explain the operation of the door to me and explained the warranty. Overall a very quick and easy experience. The door looks nice from the exterior - you basically can't tell it's there when it is open as all of the screen retracts into an unobtrusive case. Also, other than the case, there is only a rail (in a matching color) attached to the top and bottom of the door frame. Again, very unobtrusive. When the screen is closed, you can still barely see the door (and have to be careful not to walk through it!). However, $500 does seem a bit pricey for a door that consists of very minimal parts - screen, two rails, handle, and case to hold the retracted screen. Also, I am a bit nervous about the durability - the first time I opened the door and released the latch, the screen slammed back into the retractable case with a loud bang - I then learned I had to hold on to the screen during the whole release and opening. The first time my husband used the door, he pulled the screen off of its track because he used too much force - it took a few minutes before we were able to get it back in place and working properly. So, I'm worried about the durability, but there is a warranty.

Do not look any futher for a garage door screen...this is the ONE! Jim installed the Breezy Living screen for our two car garage door. WOW! it looks great and is easy to use. This screen allows us to work and relax in the garage without sharing it with the insects which are attracted into the garage by te lights. Installion was a very professional job. One return visit was required for a minor adjustment. System works GREAT and the wife is happy. Great job and product!

Jim Kulp, the installer, was very knowledgeable and friendly. The company called when he was on the way, and he was on time. He said the installation would take about an hour and a half and that estimate was right on the money. After he was done, he spent some time explaining the care and maintenance of the phantom screen. Overall, a very positive experience.

Description of Work
The company installed a phantom screen for our patio door.

Since 1986 our company has grown and so have our capabilities. We now have a broad range of products and services to offer, and the experience to bring all these options together to give each of our customers the best possible result. From a new front door, to a complete exterior home makeover, Newlook will always deliver the best products and service available.  …

Central Ohio Retractable Screens is currently rated 5 overall out of 5.

No, Central Ohio Retractable Screens does not offer a senior discount.