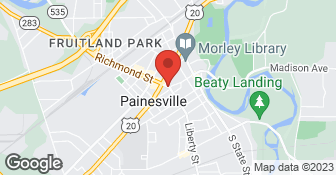 Owner operated. Cost is determined by the job. No travel charges.

Dream landscaping does an excellent job of maintaining my lawn and landscape beds. They are very meticulous about the cut, paying attention the need to raise or lower their blades. The beds are always edged to perfection with their weed wackers. They do a superb job of blowing any clippings off of the driveway and walkways. I've used them since about June of this year on a weekly basis and I plan to use them for the 2013 season beginning with mulching early in the season.

Description of Work
Lawn mowing, edging and Fall clean up.

Description of Work
We have contracted w/Dream Landscaping for the past 2 years. I am very pleased with their service. They respond quickly to our calls and immediately correct any issues that we may have. I would recommend them highly. They do all the trimming, mowing and edging, as well as spring and fall leaf cleanup

Description of Work
Used this company in the past, did a decent job. Called recently, took a few days to return call. Owner finally came out to see what work was to be done, said he'd call in a few days with an estimate. It's been two weeks and owner has not returned call.

I called for estimate and Shane came out within 48 hours. He said he would call back with estimate in a "few days". He was very professional at the time of estimate. I received a call about 5 days later from Shane asking why I wasn't going with him fr services, which was weird cause I was waiting for his estimate. I told him that I don't know where he got his info, but that I had never called his office. He called me back within an hour with an estimate. He broke it down section by section which I appreciated and some things I thought were reasonable and others I thought were really highly priced ( for example, to install and provide 3 yards of mulch was 450.00.) We arrived at an agreement for most of the services and he made a a date for service for the 7th of may. I was going to save money if I had topsoil delivered so I said I would. I also decided to do the mulching myself to save 450.00. The day before he was to arrive I arranged for delivery of the top soil from another Angies List provider. After I made the order for delivery, I called to let Shane know I had ordered the topsoil. Much to my chagrin the person who ansered-not Shane- said that they had been way behind because of all the rain and that they were not coming. I can understand having to be flexible because of the weather, however I was really miffed that we had to schedule out 2 weeks after I got the estimate, and that no one had called to cancel it. Had I not called them to confirm, I would have had a bunch of dirt sitiing in my driveway for over a week! He said he might be able to come in a week! Thankfully, the other Angies List provider that I was getting the dirt from gave me a referral for another Landscaper to at least come and give me an estimate and see if they could help me out of my predicament. The other guy came out the same day, gave me an estimate to do MORE work, including all mulching and him picking uptopsoil and mulch for over 500.00 less than Shane quoted me.

Description of Work
Estimated work for approximately 1600.00 to include re instlalation of 6 yards of topsoil, remove and transplant misc existing plants. reseed and 15x30 area. spring clean up, mow lawn and edge.

I called Shane because my previous landscaper still hadn't done the first mowing on my lawn by late April. Shane came out that same day to give me an estimate, and his estimate was very reasonable. He mowed my lawn the next day, and then in May, he did my entire spring clean-up -- weeds, edging, mulch. My lawn gets mowed every Tuesday, and if I have any questions, concerns, etc., he replies immediately. Great guy to work with!

Description of Work
Shane mows my lawn on a weekly basis, and he did the spring clean-up and summer beautifying of my beds -- everything from removing all of the weeds to edging to spreading new mulch. He's very receptive to my suggestions and thoughts as well, which is really nice.

I liked that it took them only one day to do the work. They sent a crew big enough to do the job. I think that the crew of six did wonderful work and I look forward to having them do more work for us in the future.

Description of Work
We had them clean up our yard for the spring. They trimmed trees and bushes. They transplanted two bushes, pulled weeds and added new mulch. They hand dug the edges of the flower beds.

Very knowledgeable, and would recommend to others.

They called me back right away and showed up as scheduled. Shane also gave me a quote for lawn care in the spring.

Description of Work
Shane and his men get a fall clean up for me. They were fast and did a great job.

SHANE IS VERY HARDWORKING & RELIABLE. HE HAS BEEN DOING OUR SPRING & FALL CLEAN-UPS FOR SEVERAL SEASONS, & ALWAYS DOES A GOOD JOB.

Give us a call today for your tree service needs!  …

Tree service company family owned and operated, we treat our customers like family not just a transaction. Three generations of arborists also including horticulture, Botany, and landscape professionals. There’s no job too big or small! 24/7 emergency removals, standard removals, pruning/deadwood, hauling, stump grinding and or advice! Call or text anytime for questions wants or needs.  …

How is Dream Landscaping overall rated?

Dream Landscaping is currently rated 4.8 overall out of 5.

What days are Dream Landscaping open?

No, Dream Landscaping does not offer eco-friendly accreditations.

No, Dream Landscaping does not offer a senior discount.

Are warranties offered by Dream Landscaping?

No, Dream Landscaping does not offer warranties.

What services does Dream Landscaping offer?