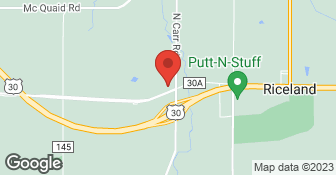 they were nice, worked with us on the insurance and in attitude, helpful, quick to return calls all was great. they showed up to put the roof on, quick, it was dark but they kept right on working but did stop with promise to return the next morning. they were here early, finished the job, cleaned up all the mess and made sure no nails were in the yard. all was fine. until hubby had to go into the attic several months later. could see the shingles where they had cut out old vents. and it was obvious that no paper was put down on that side of the roof. called, left messages, no return. then got ahold of someone, told them about the problems, said they would get it taken care of, would call back but never did. called again, get someone, again, we will take care of it. i have lost count of how many times we called. after two years we gave up. third year, the area around the chimney leaked. no return call. hubby climbed on roof and fixed the leak. had new heating/cooling system put in, guy said that in the ridge vent, it wasn't cut right, would not let the hot air out very good. since insurance paid for the job we didn't lose out of our pocket, would have really pitched a fit. from now on use local people. i would not recommend them, they put on a good show, but the proof is in the pudding,

Description of Work
i had written a review in 2012 but don't know how to change it, so doing a new one. first one was a A rating. our roof was damaged in a hail storm in 2012, they were recommended and were doing repairs on several homes in the neighborhood.

Description of Work
Roof, siding, and gutters...very long process and charged about twice as much as they should have.

The company came around and did an inspection: we had a huge amount of damage. They had to tear off the roof and replace it. They did a great job, but we had to kind of fight with our insurance company. Master Renovations did the work quickly and just were wonderful. They cleaned it up very well afterwards, using a tarp and a magnet to make sure to get up every single nail. I was very pleased. They came in under their estimate at the end of the day, too.

Description of Work
We needed some major work done on our roof after a windstorm and a hailstorm.

From start to finish, the experience was wonderful! They were professional, yet personal. Those are two qualities that are hard to find within the same company!!! Very helpful to us with choosing our materials and options. They went the extra mile and made everything so very easy on us! Having work done to your home is a stressful situation, but Travis Scott took all the stress out of it! He set everything up and got the wheels in motion. Everything was done in a much quicker time frame than we expected! I appreciate this company and each one of the guys who had any part of this work being done to our house! If you need any work done, do yourself a big favor and call Master Renovations!

Description of Work
Removed old shingles and roofing material. Replaced all rotten or weakened sheeting. Put down a barrier seal and then shingled the entire house and garage with high quality dimension shingles. Put barrier and roll roofing on a porch roof that had very little slope to it. Removed all debris from the property.

I would be skeptical to use them again. They did a good professional job. They sub contract a lot of work out to other contractors. Dealing with them financially and administratively was kind of like a dueling match. I had to question some of their charges. Some of the costs were a little inflated and I was able to negotiate with them and not have to go to any legal handling to get them to kick back some of the money. You would need to be on your toes if you were going to deal with them.

Description of Work
They did siding repair and replaced my roof for me.

Master Renovations Inc is currently rated 2.6 overall out of 5.

No, Master Renovations Inc does not offer eco-friendly accreditations.

No, Master Renovations Inc does not offer a senior discount.