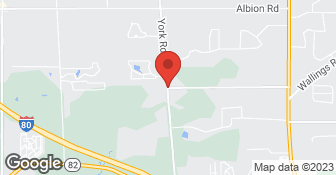 Description of Work
Dennis came the same day I called. He said I had pavement ants. These ants had wings. He sprayed the interior of the house including the basement. He informed me that I may see more of these ants for a few days. Well I seen these ants every time the temperature got over 60 degrees for about six weeks. I think they are now gone.

Dennis( the owner) came to our home at he arranged time. He inspected the problem, and explained the situation to us. He gave us a lot of interesting details. He treated both nests and assured us the problem would be gone in 2 days. We felt lucky that he came so fast and treated this difficult problem. We would not hesitate to call Dennis again. His service was great, and we learned a lot about bees!

Description of Work
Dennis removed 2 bee nests that were on the outside of our home.

He assured us he could come over that day and address the problem. He very quickly took care of a very large hornet's nest. He spent time explaining to us about their habits and what to expect. He also discussed other concerns we had with very practical advice for the upcoming fall. He assured us he would not try to sell us services we didn't need but he would always be there right away when we need it. He left 2 fridge magnates and a lot of reassurance. Dennis is very enthusiastic and knowledgeable about what he does. Thank you Angie's list for introducing us! We will use Dennis again!

Description of Work
He got rid of a hornets nest the size of a basketball.

Dennis was highly recommended to me by another city resident and customer! I very please with his responsiveness, service and over professionalism. He is a good business owner, reputable and knows his speciality. I will use him again for sure if I ever have an insect issue and will highly recommend him as well!

Description of Work
Sprayed for bees and other insects in a small area of my home near a dryer vent.

chemicals were sprayed and blown into the nest. The next day the yellow jackets were gone.

Description of Work
Got rid of Yellow Jackets nest under the overhang. He also sprayed around the rest of the house .

Description of Work
I had birds/field mice in my attic. They installed have-a-heart traps to capture them and release them back into the wild. Highly recommend their services.

He is always good in answering questions and will also come out to retreat if we ever have a pest issue. He also always answers his phone and responds quickly.

Description of Work
He came and did an annual routine spray for pest prevention.

I called the company phone# during regular busniess hours on 10-13-10 and left message with my phone#. Noone even called back.

Description of Work
The "Bug Man" came out on time. We told him about hearing a mouse in the walls or attic and he did a walk through including looking at the attic space. He checked the areas where mice would typically be and found nothing. He also told us we did not have any problems with insects or rodents. Service was what I would have expected.

I was having doors installed and when they started to install the front door the bees came out from behind the siding so they could not proceed with the installation. I found this company on Angie's list and gave them a call. They came out within an hour and a half and sprayed the problem areas and even found a bumble bee nest that I did not even know about. They took care of that also. They per friendly and professional and I think they did a great job.

Description of Work
I had ground bees in a shrub and the same bees behind my siding. They exterminated them.

I feel he did a very thorough job. He explained what he was doing. He also offered advice to close up points of entry around the outside of the house.

Description of Work
I called Dennis to report a problem with mice in the basement. He came out the next day and after checking out attic to basement, he set bait to eliminate the problem.

Description of Work
A SQUIRREL WAS DEAD IN THE ATTIC; AT FIRST I COULD NOT FIND IT; BUT DENNIS CAME AND IN TEN MINUTES FOUND AND REMOVED DEAD SQUIRREL FROM THE HOUSE; THE WAY WE WERE AWARE OF THE DEAD SQUIRREL WAS FROM THE ODOR AND FLIES THAT SEEM TO BE IN THE AREA.

A woman came out to catch animals digging underneath the cabin. She would just come out and put down a trap, but never caught anything. Another guy came and caught a few flying squirrels. He has also scraped houses for bees in the spring time. If he said he is going to be there, he will be there. He is a little high price wise, but I am happy with them because I get the job done.

Description of Work
They laid traps and caught animals. They got our house cleaned of bees.

I called Dennis on a Monday and left a message. On Wednesday I called again, but this time he answered, but asked if he could call me back. One hour later, he did and told him the situation. He said he would be in the area tomorrow and would come then. He treated the nests and the whole exterior. Two weeks later, there were two new nests in different locations. I called him and he said that he would come that same day or the next. Three days later I called and said due to weather, he would come out tomorrow, which he did. He did not charge me for this second visit.

Description of Work
Had yellow jacket nests under awning of home.

OWNER CAME OUT TO MY HOME WHILE I WASN'T HOME AND DID WHAT HE NEEDED TO GET RID OF THE BEES. SO FAR THEY HAVE STAYED AWAY, BUT IT HAS ONLY BEEN TWO WEEKS SINCE HE WAS HERE.

Description of Work
I HAD A VERY ACTIVE BEE'S NEST INSIDE MY HOT TUB. MY HANDYMAN TOLD ME THAT IT WAS WAY TOO BIG FOR HIM TO HANDLE AND THAT I NEEDED AN EXTERMINATOR.

HE SHOWED UP IN THE TIME FRAME AGREED. DENNIS EXPLAINED HOW HE WOULD TREAT THE PROBLEM AND QUOTED A PRICE. DENNIS WAS VERY PROFESSIONAL,PERSONABLE, AND SINCERE IN DOING A GOOD JOB. I WOULD CALL ON HIM AGAIN.

Description of Work
DENNIS PROMPTLY ANSWERED HIS PHONE AND MADE AN APPOINTMENT TO TAKE CARE OF A YELLOW JACKET AND WASP PROBLEM.

DENNIS WAS ON TIME, POLITE AND KNOWLEDGEABLE.

Description of Work
SPRAYED FOR INSECTS OUTSIDE PERIMETER OF HOME.

Description of Work
SPRAYED MY HOME FOR ANTS AND BEES.

Akron Pest Control is a family owned and operated company that has been servicing the Akron area since 1945. We are now in our third generation of ownership! We have 5 Licensed pest managers certified through the State of Ohio Department of Agriculture. We give free estimates over the phone. All treatments come with a guarantee!  …

No, Complete Pest Management Company LLC does not offer a senior discount.