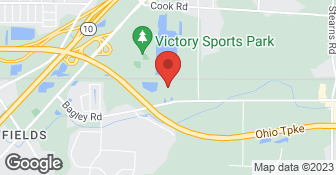 We hired Joe Afanador back in April of 2021. We own a double in Lakewood and wanted 2 kitchen remodels, 2 bathroom remodels, add a bathroom and some misc other projects. Joe quoted us and said they'd be done by 7/31/21. It's been a year. We had to get another contractor to do one of the kitchens and a bathroom, as well as electrical work he failed to provide and just haven't gotten many of the misc done. We paid every time, on time and fulfilled our side of the agreement. His project deadlines have always been way behind and not related to supply issues. First, I will say that Joe comes off as a nice guy. He's personable. You can trust him not to run off with your valuables. BUT he is not able to manage projects well or in a timely manner. He will tell you he’s going to do something one day and then just not do it. He started off strong. Work crews coming in and working 5-6 hours a day. That lasted a couple months and then the crew started to disappear until it was down to Joe and his brother. Then it was just his brother, Mike. Mike worked maybe 3 hours most days. We had some issue with him and asked Joe not to send him back after he walked off the job like a child TWICE and, so Joe was going to finish it all. Joe had childcare issues…a lot. It got to the point he was working 3 hours a WEEK. It was excuse after excuse as to why he couldn’t come. We have a heart, but after numerous childcare issues, doc appts, wife is ill, many deaths in the family ect, it got hard to be compassionate. He’d also show up for an hour, say he was getting supplies, leave and not come back. Meanwhile, the first unit had no kitchen and a semi renovated bathroom that my elderly mother is living in. He agreed he was in over his head and agreed we needed to bring in another contractor to finish the project, but he would have the electricians finish the kitchen. Time after time, they’d no show and Joe would say he was trying to get them there. He kept asking for his last payment, which we refused, as we were waiting for him to finish the projects he agreed to. We absolutely didn’t trust him to keep his word, as he never has. After weeks of no electrician, we had to hire new electricians and pay for new permits. We also discovered our brand new kitchen floor has a soft spot. I told Joe we were going to have to have someone come out and fix it and we would be taking that off any final payment. He asked to come and fix it himself. I was a fool and said fine. It’s been two weeks. He hasn’t showed and hasn’t responded to texts. We’ve lost so much money and had to pay contractors, not only to finish the work Joe promised, but to fix brand new work they did poorly. We are currently weighing our legal options. Buyer beware.

Joe did a wonderful job taking out a large window and replacing it with a French door. Made it look so easy and done in no time. Will be hiring him for more jobs soon.

From new homes to fixing the crack in the ceiling that just keeps getting bigger. With Dri-Wall Genie, not only do you get the flexibility to have drywall hung, finished and painted, but you get quality work every step of the way.  …

Barski hardscaping, previously Great Escapes Landscaping, was established in 2009 with the desire to set the highest standard of integrity, workmanship, professionalism and commitment. We are hands on from the start to finish. We approach all our projects with a Plan - Design - Build strategy. It is important for us gain a thorough understanding of your wants and needs in order to establish the project. Our goal is to give you peace of mind, knowing that the success of your project is in good hands.  …

Owner operated. No Subs. Cost is determined by the job.  …

No License Required for Trade
Bonded
Insured
All statements concerning insurance, licenses, and bonds are informational only, and are self-reported. Since insurance, licenses and bonds can expire and can be cancelled, homeowners should always check such information for themselves.To find more licensing information for your state, visit our Find Licensing Requirements page.
General Information
Free Estimates
Yes
Eco-Friendly Accreditations
No
Payment Options
Check, PayPal
Warranties
Yes

Afanador Construction, LLC is currently rated 3 overall out of 5.

No, Afanador Construction, LLC does not offer eco-friendly accreditations.