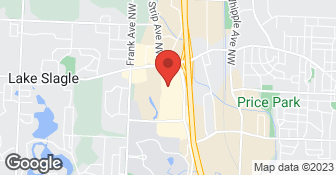 Local Expert Geek Squad Agents can fix your Appliance or TV regardless of where purchased. 90-day warranty along with professional, quick, and clean services. Check us out online, by phone, or at over 1,100 Best Buy stores. ...

We like them. We had looked around and found what we really wanted for the best price. Our overall experience with them has been excellent.

Description of Work
We bought our computer from Best Buy.

They took a lot of time to figure out the problem. They were very personable, and up front with me. They resolved the issue and gave a good service.

Description of Work
I brought my modem to their store.

I purchased my dell through best buy. It was still under warranty when it broke. Upon taking it in for warranty applications, the store techs could not find a problem. It was under warranty, so they wanted to charge me $100.00 to retrieve my information off the hard drive. Without giving me some kind of diagnosed problem. It was stated to me that to be able to check it out in house by a service tech, which could take up to 3 -5 days, but in doing so I would have to sign a disclaimer form. In the process of reading it, I disagreed with several items within it. If I did not sign the waiver or purchase the retrieval of my information, they would not service my computer. It was verbally told to me that they try and save your information but can not guaranty it. At the same time they said that it could be a simple problem or a difficult problem. Upon doing so, with in three day of being in the service center, they called and told me it would have to be sent to dell. They still didn't know if I would lose my information or not. In the process of this, the person calling me said I would now have to purchase the data backup plan, even though there was no diagnosis. They sent it to who I thought was dell. They stated it could take seven to ten days. I got a automated call stating my computer was ready for pick up at best buy. The following day I got a call from the geek squad, asking me if I wanted them to retrieve the information from my hard drive for $259.99. Upon getting my laptop computer from best buy, they stated to me that they replaced my hard drive. All of my information is gone. Personal, work related, and school information. When I did call and speak to the geek squad, the stated that if the hard drive was to be replaced under warranty then the old hard drive would become the property of dell. I spent two and a half hour calling dell and the geek squad and nothing has been resolved.

Description of Work
I purchased a dell computer through best buy.

TechVrse is a full-service IT consulting and Digital Marketing firm providing services to businesses and homeowners in the Northeast Ohio area. TechVrse provides top-of-the-line Web design and hosting, Search Engine Optimization, Pay Per Click advertising, and best in class IT support services like home automation, custom-built computers, and more for businesses and homeowners. TechVrse is your one-stop-shop for this digital and connected world. We pride our company on reliability, great communication, integrity, and quality work. We are experts in our trade and will do our best to keep you as educated as we can on your particular task or project. We look forward to earning your business! Book with us online or feel free to give us a call today!  …

Since 1978 J & B Appliance has been providing in-home service on major appliances to the greater Western Reserve area. We currently have Have 8 Full-time employees, That includes 6 technicians and two Office staff. All service is COD. And we always flat rate quote the job before anything is done. We accept all major credit cards, and cash. We also replacement parts.  …

We provide expert, in home, repair for all your appliance needs. We service all major brands including Samsung and LG which many repair companies tend to shy away from. Call today for pricing and details!  …

Geek Squad - Best Buy is currently rated 3.7 overall out of 5.