Exterior Painting
Interior Painting
Pressure Washing
Wallpaper Removal
Finished Carpentry and Woodworking
Deck Maintenance
Cabinet Refacing and Refinishing
Wallpaper
Handyman Services
Drywall
Licensing
Bonded
Insured
All statements concerning insurance, licenses, and bonds are informational only, and are self-reported. Since insurance, licenses and bonds can expire and can be cancelled, homeowners should always check such information for themselves. To find more licensing information for your state, visit our Find Licensing Requirements page.
Business Details 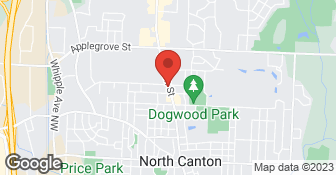 Specializing in pressure washing! We guarantee your satisfaction and we won’t leave until the job is done right. We pride ourselves on the quality work we provide, while delivering great customer service! Check out our services offered and call or click to schedule a free estimate today!

Perfect Power Wash, LLC a locally-owned and operated company that values honesty, integrity, and treats your home as if it were our own. We use our 20+ years of experience and dedication to customer service to provide the perfect clean for every customer. In total, our team has power washed over 100,000 Ohio homes and businesses. Our soft wash process and biodegradable cleansers safely remove dirt, mold, mildew, and algae from all exterior surfaces. We utilize best-in-class equipment for every house wash, concrete wash and seal, roof treatment, deck/patio wash, and commercial power washing job. Perfect Power Wash makes it easy for every homeowner to power wash their property. Just give us a call today to get your project started!

Despite it being late in the year for outdoor painting, John and Alison Pickering worked their crew's schedule to accommodate our request for painting our deck.  It would involve a couple of days work that had to be planned around the cool rainy weather.  They kept in communication with us and let us know when they would be working.  John was punctual and professional for the estimate. The crew wo...

DESCRIPTION OF WORK
We have a bi-level deck that needed to be cleared of leaves then power washed to prepare for painting. It involved painting a lot of railings, steps, the deck and an overhead section.  They also needed to unscrew then replace the newly installed outdoor light caps from multiple posts.

The paint job was NOT good and their professionalism is even worse. They didn't paint the trim around the windows like the contract said. They tried to rush the painting process, and I still feel like they missed quite a few spots. There were even times where I had to tell them to paint spots they missed. In less than 2 months, the stucco was looking horrible and crumbling. It is even worse now si...

DESCRIPTION OF WORK
They were hired to paint my entire house and fix the stucco before painting.

All agreed contract dealings were conducted strictly between CertaPro Painters and Linells Fiduciary, Nicole Welsh. All work was performed as agreed contract. (member name removed) never contacted her Fiduciary, nor had she contacted our franchise directly either via email or phone or else we would have taken care of any issues as soon as possible. (member name removed) went directly to corporate ...
5.0

They painted the front porch no problem and looked great.  However the back fence in the contract stated "power wash, prime, and stain".  Well, they power washed, and then put a "primer and paint in one" on, just one coat, and it looked awful.  My wife called me incredibly upset saying it looked terrible, and we have the pictures to prove it.  The painters said we were only getting one coat and if...

As per the agreed contract, the homeowners project was to receive only one coat of paint on the fence and since we were applying only one coat, a Sherwin Williams product was used that is a paint and primer in one. It was unfortunate that one coat did not give the coverage the homeowner had envisioned. Therefore, CertaPro applied at company expense, a second coat.
5.0

They were perfectly splendid and did a wonderful job.

DESCRIPTION OF WORK
They painted the outside of the entire two story colonial house and the trim.  I don't remember exactly how much I paid.

I am very happy with the job.  I had two quotes and felt that Joe from CertaPro did a more thorough job of assessing my house.  So I went with them even though it was more expensive than the other quote.  The crew removed the shutters to paint them separately and had to deal with BATS behind several shutters that no one knew about.  They pressure washed the whole house, chipped off all the peeling...