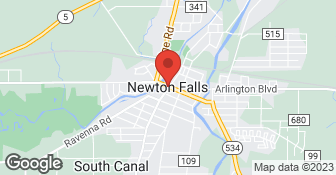 Welcome to Evolution Concrete & Construction LLC, we are a BBB Company with years of experience, old fashioned customer service, and realistic pricing for folks who want a balance of real quality... and affordability. We offer a range of services, discounts, and incentives, as well as payment options. We always put our work in writing and guarantee it as well. We hope to hear form you soon, and are looking forward to helping your next project go smoothly with the results you expect. For Pictures, and additional info see our website at www.evolution-concrete.com or call us for one on one consultation. We'll even make sure you talk to a real live person... not an endless loop of recordings or voice mails that dont return your calls. Thanks again and have a wonderful day!...

Evolution Concrete came out several times to quote the job. After researching they came back with a very fair price and terms that were very acceptable in a timely manner. I had a personal situation arise where I needed to back out of the contract. When I called and let them know they refunded my deposit in a very professional and timely manner. They are a pleasure to work with and I will definitely hire them again for any concrete work I look to have done in the future.

Brad and team did a great job and were very professional and responsive. I shopped around and their price was reasonable and the quality of the work was very good. The project was completed on time and exactly the way we wanted and actually beyond our expectations thanks to Brad's recommendations on how to approach the final layout. I would definitely recommend this company to friends and family.

Project was well done and completed on time. Clean, quick demolition and installation, very nice finish. Big improvement in the appearance of our home. Professional operation.

Brad was wonderful! He did a stamped concrete patio and also replaced a driveway culvert for us. Brad was easy to work with and the job looks great!

.***Additional follow up information*** I originally did a review for Evolution Concrete and the owner Brad. I was complimentary, in spite of a number of unethical events on his part, mostly because the work turned out pretty good. Since then, a great deal has happened. When Brad was removing the sidewalk with an front loader, he damaged some things. He destroyed 3 of my sprinkler heads for my in-ground irrigation set up. After talking, he deducted $150 dollars off the bill to partially cover the cost of replacement. I was initially satisfied, but later, additional charges were added which more than wiped out this allowance. My real problem was with some serious damage to my property. I came home from work to see Brad fussing with something at the end of my sidewalk. He was angry because the exhaust pipe from my sump pump was broken off. It was underneath the existing sidewalk and during removal, he broke it. He had some PVC pipe there, but no cement. He said he would bring some and fix this damage. I gave him some PVC cement I had just bought for another project. He proceeded to "fix" what he had broken. I had ever reason to believe he knew what he was doing. At the conclusion of the job, I was very unhappy with his business practice of adding charges. But we paid it and shook hands and went our ways. In about a week, I notices the wall where the sump pump exited my house was soaked and leaking on the floor. (I took pictures of this). This was a place on my basement wall that NEVER had a drop of water show up on it. I called Brad to come over and look at it. He agreed the pipe was leaking underneath the new pour. When asked by me to make it right, he said he would take out that section of concrete, but he cost of the plumbing and replacement of new stamped concrete was on me. He said "I'm not paying for that". So, I went to see an attorney who wrote Brad a letter saying we were willing to pay the first $500.00 dollars of the repair to cover a plumber and some of the other costs. He never acknowledged this letter and never contacted our attorney. We have since decided to turn this over to our insurance company. I am going to have to pay a hefty deductible and incur future increases in my policy premium for getting them involved, and Brad walks a way scott free. So beware when dealing with him. Find someone who is willing to take responsibility for damage and pay to make repairs when needed.

Description of Work
Removed out a portion of driveway, sidewalk and front steps and porch. New, dyed, stamped concrete to replace what was taken out.

Description of Work
We have a very long driveway and parking area. They removed the old concrete driveway and poured a new driveway. 100% improvement, very happy with their work. They also installed a drainage system for the new driveway.

Kondo's Koncrete LLC provides exceptional service and value by manufacturing quality products and delivering them in a safe and a timely manner. Our mission is to provide the highest-quality workmanship possible. Steve Kondilas, OWNER, has been in the concrete business for over 10 years. After becoming very reputable in the town between different concrete companies and homeowners, he decided to branch off on his own.  …

Our services include but are certainly not limited to... high quality conrete work of all kinds, including interior flooring, customer patios and fire pits, overlays, stains, etc... we offer beautiful retaining walls, excavation, trucking, demo, masonry, pole barn construction, asphalt repair, plowing and much much more.

Evolution Concrete & Construction LLC is currently rated 4.5 overall out of 5.

No, Evolution Concrete & Construction LLC does not offer eco-friendly accreditations.

No, Evolution Concrete & Construction LLC does not offer a senior discount.